Bank of Uganda takes over Crane Bank, suspends all managers 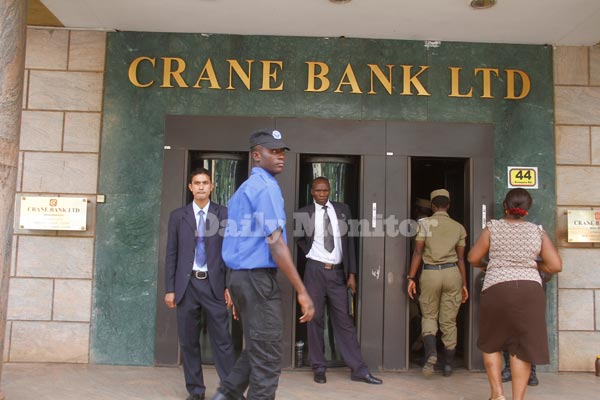 The announcement was made by Bank of Uganda Governor Emmanuel Mutebile

by the Central Bank will have no bearing on the daily operations of Uganda’s fourth largest bank by assets.

Crane Bank, Emmanuel Tumusiime Mutebile, the governor Bank of Uganda (BoU) said on Thursday, was “a significantly undercapitalised institution” but they (BoU) had appointed a statutory manager who would continue running the affairs of the lender without interruptions.

In 2010 the Central Bank revised the minimum capital requirement to Shs25b, below which any bank cannot be allowed to continue operating.

“Crane Bank will remain open and its operations will continue normally, under the management and control of Bank of Uganda,” Mutebile said in a statement issued after the takeover.

The takeover, he said, was not necessarily a closure but the Central Bank would station appointed mangers at the bank’s entire 47 branch to supervise and oversee daily operations until when the bank returns to stability.

This, according to analysts, means that Central Bank, at its discretion, might in future invite potential investors to recapitalise the bank or wholly sale out to an entity or investor that might choose to run the bank in its current form or under a changed entity which might include change of trading name and composition of directorship.

No investor has so far come out to publically express interest in the purchase of or part of the bank.

However, The East African last Thursday reported that Atlas Mara, a financial services company co-founded by Bob Diamond, who until 2012 was Barclays Plc’s chief executive officer and Ashish Thakkar, a businessman of Ugandan Indian origin, were in talks to have a share of the bank but negotiations had been delayed because Crane Bank had refused to write down its balance sheet by Shs60b ($17m).

Crane Bank, The East African reported, was against the move that would bring down its overall valuation from an estimated Shs1 trillion ($300m) closer to Atlas Mara’s target of Shs857b ($250m).

The financial distress that Crane Bank finds itself in, Mutebile said was, in part a result of bad and doubtful loans that could have negatively impacted the bank’s bottom-line.

The Central Bank blamed this on the bank’s top management and the board that were immediately suspended to pave way for an investigation into the alleged mismanagement.

Early this year, Sudhir Ruparelia, Crane Bank’s majority shareholder alluded to the worrying state of the economy, which he said would be a hard knock on the country’s performance indicators.

“Kampala is on sale [properties] but no one is buying. This is bad for the economy,” he said recently at the height of the alleged bid for government to bail out distressed companies.

Police remained deployed at all branches with the Central Bank saying there was no cause for worry.

In a statement issued to all Crane Bank staff, Mutebile urged employees to “render utmost cooperation in the process” as well as support the appointed manager in the smooth takeover.

Under the Financial Institutions Act 2004, the Central Bank has powers to take over a financial institution that fails to smoothly manage its liquidity flow or is involved in fraudulent transactions.

Several banks, including National Bank of Commerce, Global Trust Bank, Teffe Trust Bank, Greenland Bank and International Credit Bank, among others, have been takenover or closed in the last 15 years for failing to adhere to required standards, fraud or falling below minimum capitalisation.

Crane Bank is controlled by Sudhir, who controls 48.67 per cent of voting rights, based on shares held directly and by close members of his family, according to the bank's 2015 financial report.

Other shareholders include White Sapphire Limited (47.33 per cent), Jitendra Sanghani (04.00 per cent) and Tom Mugenga with a 00.01 per cent stake.

The bank was established in 1995, offering corporate and retail banking.

As of December 2015, Crane Bank reported a consolidated pre-tax loss of Shs7.3b compared to Shs57b profit posted by close of 2014.

The bank had also embarked on a fast-paced expansion moving to 47 branches across the country, which analysts said could have stretched its operations.

Last Wednesday the Central Bank had in a statement denied connection with messages that were circulating on social media urging depositors to withdraw their cash ahead of the pending closure of the bank.

Crane Bank also has operations in Rwanda with partner banks in South Sudan.