Police have arrested Forum for Democratic Change (FDC) secretary for mobilization, Ms Ingrid Turinawe shortly after she boarded a taxi in protest of the lifting of presidential age limit.
Ms Turinawe and other Opposition politicians on Tuesday left their cars at home and used public means of transport to work in protest of the planned removal of age limit by the ruling National Resistance Movement (NRM) MPs to allegedly pave way for president Museveni to contest for his fifth term of office.

This comes just hours after former FDC presidential candidate Dr Kizza Besigye urged all Ugandans, especially the elite class to leave their cars at home once every week to show solidarity with those opposed to lifting the presidential age limit of 75.

“Stop moving with your private vehicles on Tuesday and other actions will roll out until the regime surrenders,” Dr Besigye told journalusts at his home in Kasangati, Wakiso District.

Following Dr Besigye’s call on Saturday which he reiterated Tuesday morning, Ms Turinawe boarded a boda boda motorcycle at her home in Gayaza. She stopped at Kasagati stage and boarded a taxi.
However, the taxi was intercepted by police officers who whisked her to unknown location.
Her arrest comes just hours after Kampala Lord Mayor 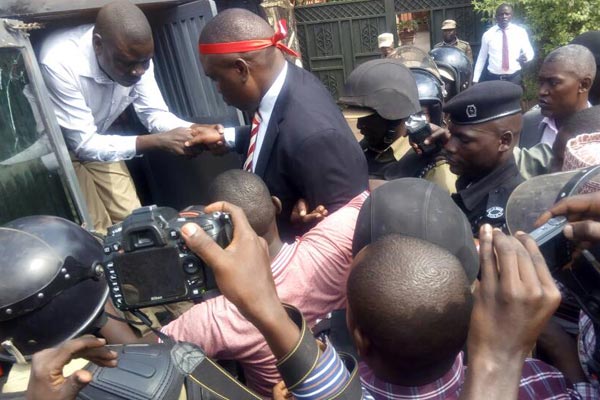 Grace Nyangoma, Old Kampala police station DPC told this reporter that police doesn't have any problem with Mr Lukwago as long as he doesn't cause chaos.

at his home in Wakaliga.