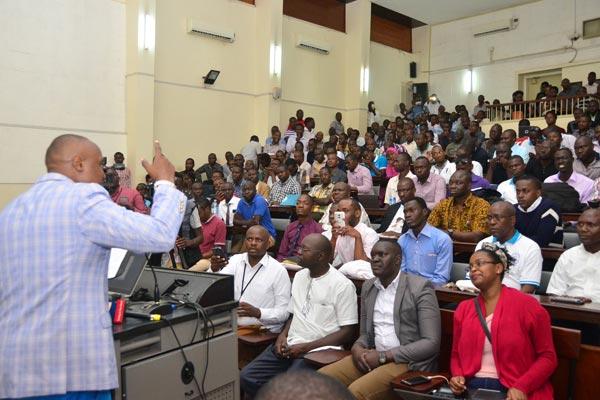 at all public hospitals at the beginning of November 2017 if government does not respond to their demands.

Doctors among other things, demand enhanced salaries and allowances, for overtime, housing, transport, medical risk and retention.
An intern doctor, currently earning a gross salary of Shs960, 000 will earn Shs8.5 million, if government endorses their demands.

They also want a medical officer or teaching assistant to be paid Shs15 million and accorded a two-bedroom house and a 2.5cc vehicle, while a senior consultant doctor or professor will be the highest paid health worker, with a gross salary of Shs48 million, a five-bedroom house, 4.0cc vehicle and three domestic workers.
Currently, a senior consultant doctor earns about Shs3.4 million, consultant Shs2.6m, and a medical officer Shs1.1 million.
Doctors also want salaries for nurses and midwives enhanced to about Shs6.5 million in addition to a three-bedroomed house, 2.0cc vehicle and one domestic worker.

This implies that at the beginning of next month, anyone walking into a public hospital at the beginning of next month, with a medical emergency will be headed for doom, stirring mixed reactions among social media users.
One person who goes by the names Roslands HC Sparrow, commenting on a post on the Daily Monitor Facebook page encouraged the health workers to strike, arguing that the government is dishing money to MPs.

“These doctors have staked their lives to treat people. Some even get infected by various diseases; they are over worked yet earn less. They should strike, that is when you will realize the importance of their work,” he said.
To Thadeous Hon, another follower of Monitor page, medical workers ought to set their own salaries.

“Parliament, KCCA, URA, the judiciary are setting their own salaries and are respected and I hope the medical workers do the same because the service commission failed it's work and everything seems to be done by the President anyhow,” he said.
“Yeah they are right. Museveni wastes money on bribing the MPs and other cabinet Ministers, yet the relevant parts like doctors are left and isolated. He says Uganda is developed, let him prove it on doctors’ demand,” said Okech Benjamin.

“Let those who feel no pain laugh and ridicule the medical workers today but I’m sure at one point, they and or their loved ones will realise that the so called useless sector (health) was actually necessary, when they seek health service and never find it. I mean you can never know how useful something is until you lose it,” said Nelso Neli.

Ssekimpi John said: “Today, I will support doctors, not because it's necessary to increase but because of failed system. You can't have a S. 6 dropout earning 30m a month.”
“All our experts have left to abroad for a better pay, yet people are dying here because of lack of doctors to attend to them in time. I support the doctors; actually they took long to strike. Something should have been done a long time ago. I urge all other health workers to join the fight, such that a louder voice is made,” said Jackieline Joloba Mwesigwa.

“Doctors deserve a good pay. A lot is paid to these puppet Museveni MPs in form of bribes such as the Shs20m for age limit consultation. How do you explain there is no money? Let doctors force this government to realize we have more pressing issues than amending article 102,” said Jabi Edward

“Uganda has money but doesn't spend it on the basic needs equally. Imagine a member of parliament earning 400k a day, which a nurse and primary teacher earn in a month. Life is very important and it needs to be prioritized. So I support our doctors,” Mutai Joap Arapkirenyi.
Akahumuza Goliyasi said “I think they are very right because when you look at how money is being wasted on NRM motives that don't benefit. You really sympathize with these medical people after looking at these meager fingers of income at the expense of lives of Ugandans!”

Though doctors deserve better pay and decent accommodation, Nsubuga Eric, while reacting to a post on the Daily Monitor Facebook page said their demands are unrealistic as per the current state of Uganda's economy.
“Am very sure even a half of this cannot be given to the doctors. Let their demands be moderate. My view is that the government must look into all salaries of civil servants and raise them by equal amounts, and then if it is 1 or 100% it should cut across. There is no big servant than the other,” Charles Muhumuza commented on the same post.

Gil M Phelps said; “have they found the cure for HIV, for them to demand "elephant" perks? These demands are too much. They should be considerate for their strikes to be relevant.”
“Let them resign and we see if there is any private hospital that will pay them just like the government. Had I been the minister, I would have given them a deadline to report to work. They are the most corrupt people. They can never treat a patient unless they are bribed,” said Sekalye Abdulla.

Kisakye Micheal said; “Trust me with the bleeding economy, even if we pay you 1 billion... Just demand for an economy that works for everyone, no corruption etc..
How come the pioneers in the medical field lived a happier life with an average salary and a house?”

Although we want Ugandan doctors’ salaries to be raised as soon as possible, Denis Banturaki said “this stupidity of demanding all that money and requirements as if they are the only ones educated is not going to help them. In fact we want them helped but they must be realistic.”

Ogwal Morrison said, “The demands by Doctors are unrealistic. How can an intern doctor be paid Shs8.5m? Much as I support that their salary be increased, I would think the lowest paid nurses and midwives should get like Shs2m. That is very reasonable.”

Although doctors are doing commendable work for this nation, Kateyenge Sam also said the demands are very impossible.
“If put in percentage I don't know what percentage their demand will be. Maybe they can claim for a good salary but not all those. Think twice our doctors,” he said.

When contacted by Daily Monitor, Dr Mukuzi Muhereza, the UMA secretary general, said their demands did not fall from heaven, and that they had made a comparison with all other government Ministries, agencies and departments.

For instance, Dr Muhereza said the General Manager of the National Medical Stores earns about Shs35 million, which is the same range they are asking for a senior consultant.

“A senior Consultant doctor is an equivalent to a High Court judge and they are all appointed by the President,” he said.

Prof Francis Omaswa, a senior consultant doctor and former director general health services at the Ministry Health said that the doctors’ demands are not “outrageous but set grounds for negotiations which the Ministry of Health should respond.”

“It’s true that the Director General Health Services used to be the highest paid civil servant and it’s also true that an appointment letter for senior consultants spells out benefits like chauffeur driven car, housing and domestic workers but are never made available,” Prof Omaswa said.