In July this year, top eight officials of the Electoral Commission, including the long-serving secretary Sam Rwakojo, were reportedly sacked over allegations of corruption related to the printing of ballot materials for the 2021 elections.

President Museveni said Monday that government is in the process of procuring equipment for digital verification of the voters using their biometric-data in attempt to stop vote rigging in the coming election.
“…it has been part of my mission since 1961 to contribute to the ending of votes rigging in Uganda. I, therefore, determined to close those gaps also. The only way to close this gap that did not depend on the vigilance of the people was the digital verification of the voters using their biometric-data (fingerprints etc.) so that voter registers only once and if he or she tries to register a second time, the central memory of the system will detect it and block it,” said Mr Museveni who has been in power since 1986.

The president said the corrupt team that was in the Electoral Commission refused to procure the biometric system.
“It is, however, being procured now,” added the 75-year-old leader who opposition leaders like Dr Kizza Besigye, have on several occasions accused of cheating to prolong his stay in power.
In July this year, top eight officials of the Electoral Commission, including the long-serving secretary Sam Rwakojo, were reportedly sacked over allegations of corruption related to the printing of ballot materials for the 2021 elections.
However, the EC chairperson Justice Simon Byabakama Mugenyi, later said the officials tendered in their application for early retirement citing personal reasons. 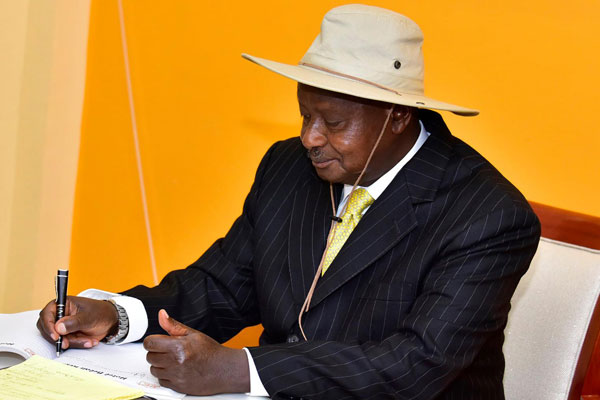 Museveni: It has been part of my mission since 1961 to stop vote rigging in Uganda

According Museveni, the biometric system being procured will end what he described as the sad story of the anti-democratic forces at least as far as the problem of multiple voting and multiple registrations is concerned.
“It will also deal with the problem of ballot stuffing because the fingerprints digitally read must be equal to the votes in the ballot box. The issue of bribery, threats, attacks, etc. is for the Police and the Public to capture the evidence and we deal with those Criminals. These measures would free the voting process of the country from the crooks,” added Mr Museveni who plans to extend his rule to the fourth decade in the 2021 elections.

He said his party, the NRM, did not have the resources to build a digital system, the reason they opted for lining up in the just concluded party primaries.
“Yet, we were being undermined by the corrupt actors that had infiltrated the NRM when we came from the bush. When we came from the bush, we used the method of lining up behind candidates of our choice and it was very transparent,” he said.
Museveni seized power at the head of a rebel army in 1986 and many observers say they doubt he will ever give up power through democratic elections.