In December 2020, a field team from Mercy Corps and CIP were monitoring programme activities in Tepeth Village, located in Kotido District. They were gathering feedback from some of more than 1,000 people who had received vines for growing orange-fleshed sweet potato (OFSP) earlier that year.

Among the people they talked to, was Moses Longura Kapel, a 26-year old man who was born with a condition that renders the lower parts of his legs inoperable. He moves around by walking on his knees.

Moses told us the condition severely limits his opportunities within the local culture. “As a man I am supposed to build a house for my wife and provide for my family. But I cannot marry because no one thinks I will be able to provide. I have learned to accept my situation and I am hard working. I do not allow my condition to dampen my spirits.” 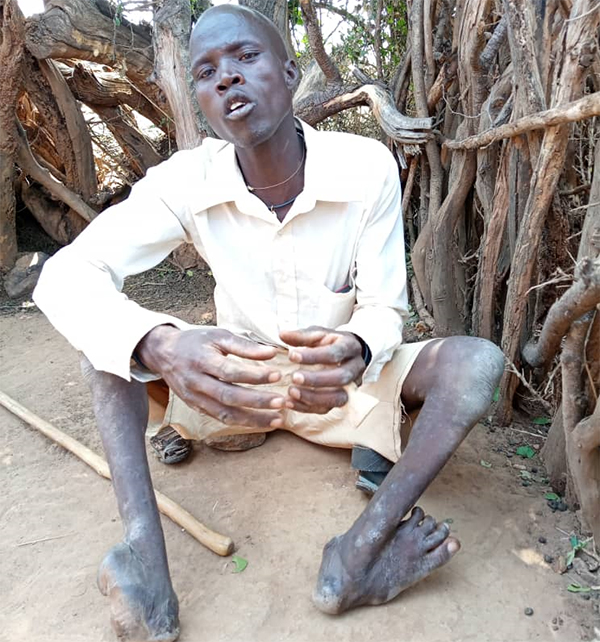 Moses says OFSP is one reason he maintains some optimism. Like others in Tepeth Village, he received vines in June 2020 to plant at the onset of the rain season. He received hands-on agronomy training and demonstration from the Mercy Corps’s agriculture village agent and the Kacheri subcounty agriculture officer, Mr. Dan Toola, who taught him how to prepare the land, plant the vines properly in the soil and maintain the sweet potato field.
Moses discovered that, relatively speaking, OFSP is an easy crop to grow. “At first, I thought sweet potato required a lot of labour. But that wasn’t the case. Hilling was very easy, and I learned that I only needed to weed the plots twice during the cropping season. It is a good payoff for that amount of work,” he said.

When the OFSP was ready for harvest, Mr. Noor Mohammad, an assistant agronomist working with Mercy Corps, Kotido office taught Moses how to cultivate his vines to sell to his neighbours and the nearby market as seed for the next growing season.

Fortunately for Moses and others growing OFSP, the rains in 2020 were abundant and the yields of OFSP were high. Moses said his vine sales allowed him to do more than have food on his table.
“I am no longer afraid of sleeping hungry and I have managed to save some money for non-food needs.”

Best of all, Moses says OFSP has changed his outlook. He is more hopeful for his future: “Just like any other able-bodied men in my village, I will conserve more vines in the dry season to plant next year. I know this crop will go a long way to helping me build a better life – and maybe finding a marriage partner!”

To learn more about CIP visit us at https://www.linkedin.com/company/international-potato-center-cip

This story is sponsored by International Potato Center (CIP).