This year’s Ramadan was launched with an Iftar dinner between MTN, Salma Foundation and the Muslim community at Hotel Africana. Thereafter as has been the norm since 2017, MTN Uganda in partnership with Salam TV once again reached out to the Muslim community to handover food and alms to the muslim community members, specifically the covid-19 Frontline workers.

Some of the targeted groups include the Muslim members in the Uganda People’s Defense Forces, Uganda Police, Uganda Prisons Services, Orphanages, Teachers and Prisoners among others. The food items include sugar, rice, maize flour, wheat flour and cooking oil.

While receiving the food items at Kibuli Muslim Headquarters early this week, Sheikh Luwalira Lubowa, Secretary-General of the office of the supreme Mufti thanked MTN and Salam Foundation for continuously remembering the Muslim Community every year. 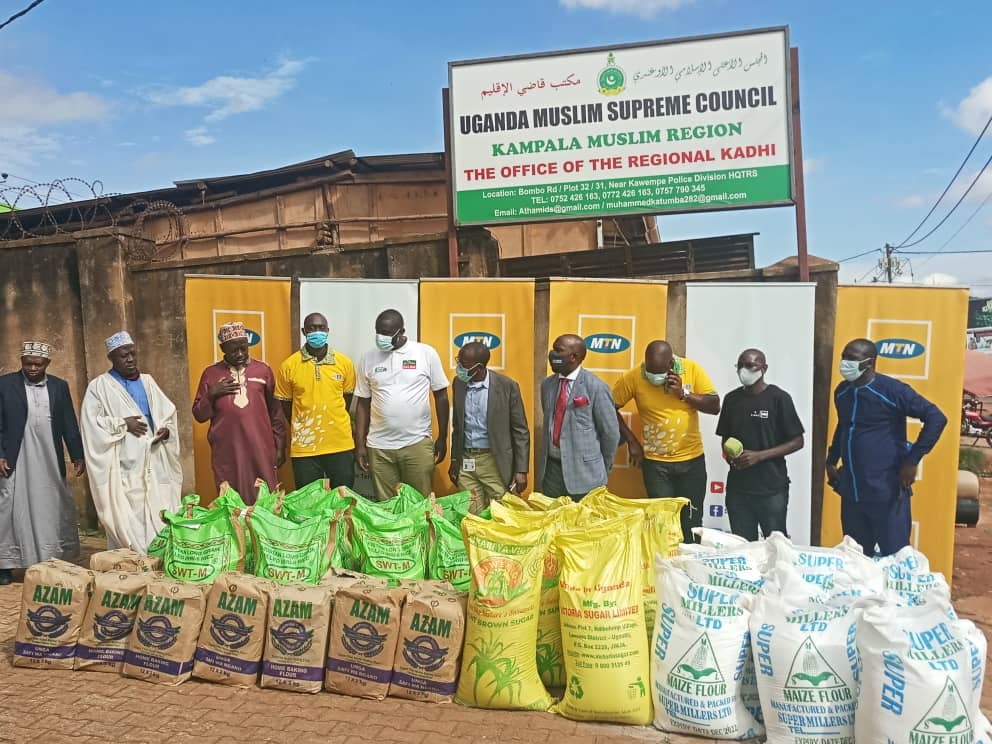 “We thank MTN for the services they have been extending to the country and we pray a blessing upon MTN and all their work in the country. This is the 4th time in a row that they are reaching out to us and we appreciate the gesture. Many people rely on the mosque for iftar meals at the end of the day and we are happy that MTN and Salam Foundation are reaching out,” Sheikh Luwalira said.

Hajji Latif Ssebagala who received the alms on behalf of Kisaasi College thanked MTN for giving back to the Muslim community. He urged other companies to emulate MTN by remembering the communities who support them.

MTN Uganda’s Ian Mugambe said that as the country regains momentum following the disruptive Covid-19 Pandemic, MTN Uganda has decided to reach out to the Covid-19 frontline workers this Ramadan as a way of honoring their selfless duty to the country during the pandemic.

“On behalf of MTN Uganda, this is our way of showing appreciation for the people who have been at the frontline against the deadly virus by reaching out to them during this fasting period,” Mugambe said.

Other beneficiaries of the Ramadan handover include the Kampala Imam’s Forum, The Muslim Teachers’ Association and medical workers, who will receive their alms this week.

Alongside the food and alms, MTN has also launched a promotional offer which will automatically give customers 30minutes of talk and 100MBs of data every night between 12am to 6am, when they load airtime or any bundle using MTN MoMo.

This promotional offer will end with the holy month of Ramadan and is also open to all MTN customers.

This story is sponsored by MTN.