Advertisement
By Joan Salmon
More by this Author

On several occasions, we go the extra mile to make our children happy for their happiness makes our world better.

Such is Carole Ayella’s story. “My children love cakes a lot and for several years, I bought cakes from different places  but on tasting them, I never got the taste I really craved for. This gave me a push to try out baking from home and I shared some of these with neighbours, close friends and family,” says Ayella.

The charitable act would soon launch her into the baking business as the recipients loved them and started recommending people who came in as clients.

However, passion and skills are not the sole bolts and nuts of business and Ayella says starting out was not as easy as she had envisioned.

“It was a tough start because I was inexperienced. More to that, at first, multitasking responsibilities of family and the new business was not easy,” she says.

Nonetheless, she was encouraged when she got her her first customer, Lydia Nakanwagi who  bought a christmas cake at Shs100,000.

“I got her through a referral and their positive feedback encouraged me to aim higher in the cake business,” Ayella explains.

The proprietor of Carole’s Cakes and Treats is passionate about bakery and started the journey in 2018 with only Shs200,000. “These savings were from akameeza money and with it, I was able to get some essential items for beginners such as an oven thermometer, two locally made baking tins, a weighing scale, measuring cups, a wooden rolling pin, a serrated knife, a whisk and the remaining money was used to get some ingredients,” says Ayella. However, being inexperienced business-wise, pricing never came that easy.

“Previously, I only factored in the cost of ingredients but not others things such as labour, electricity, time for baking and decorating,  branding, garbage collection and airtime,” she says.

In that regard, Ayella owes her success to Cake Shop Uganda (CSU) where she learned how to cost and price her products from various bakers. “It’s from CSU that I learnt the business. They taught me how to determine prices, quality and marketing,” she says. 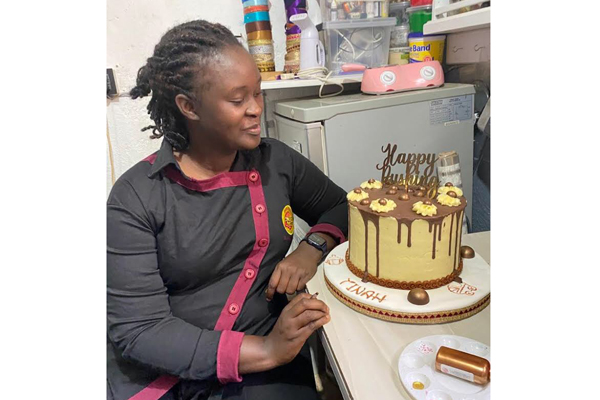 Ayella displays one of her cakes ready for delivery.

Situated at Sir Apollo Kaggwa Road, Makerere, Ayella’s clients are those who make orders for cakes and other pastries, hire her chocolate fountains and wedding cake accessories. She gets these by marketing her services and products through satisfied clients’ referrals and social media platforms.

However, the only way to keep these people coming, Ayella has had to better her skills and attending trainings is one way to do it. “Some of these trainings include baking, cake decor, and sugar crafting. While these have so far cost me Shs4.5m, the skills learned such as cake decor and moulding make the investing well worth it,” she says.

Ayella says the challenges in the baking industry are immense, from a reversed order, late payment or no payment. However, the one she finds very frustratingis failing to get to find good baking equipment such as letter cutters, and moulds.

There have also been sad moments such as when Covid-19 disrupted the Kenya Baking Industry Awards (KBIA).

“If the KBIA were not cancelled, they would have afforded a platform for Carole’s cakes and treats to showcase our capabilities to East Africans and thus marketing us,” she says.

She has also learned several lessons along the way such as the need to train staff.

“I wish I had trained someone from the start with the skills I have in baking and decorating. My work load today would be easier,” says Ayella.

Nonetheless, there is also reason to smile such as when a client gives you an amazing compliment.

Ayella has also celebrated several victories. One of these was when she and her team won the cultural musical dance in 2019 cake fair.

“Right from choosing to participate, the odds seemed against me that I had an incomplete cake on the day of showcasing. It was one of my teammates that took it there because while we had wanted to showcase the Larakaraka dance, some of the calabashes were broken.”

Bereft of hope, Ayella was amazed when the announcer called out her name. “All I had was gratitude to God who despite my doubts had made a way.” The other was when her company was nominated for KBIA under the category of cake artist of the year Uganda. However, they were postponed until further notice due to Covid-19.

“Despite all that, being nominated in the KBIA encouraged us to keep going in the baking industry during these difficult times,” says Ayella.

On a weekly basis, Ayella makes between Shs300,000 and Shs1m. So far, her biggest order has been a wedding cake alongside a chocolate fountain that fetched her Shs8m. “This also constituted the biggest sale,” says Ayella.

Ayella hopes to establish baking, schools in different parts of the country. “I also hope to engage in events decor in the near future,” she reveals.

Carole’s cakes and treats is also aiming to build an everlasting taste and foundation in the baking industry.

As the saying goes; if you fail to plan, you plan to fail.

“If you are just setting up as a part-timer you need to give yourself a clear idea of your monthly costs and how much profit (or other income) you must generate to keep going. Work out what your monthly sales need to be, factoring in costs such as baking equipment, ingredients and delivery. Make yourself a chart for the next 12 months showing the growth in sales you can realistically generate and be clear on how you will generate those new customers,” says Ayella.

The activists now want the Ministry of Health to join them and expedite the process that has been ongoing since 2015 when a private member was...