Mugejjera advises people to start small and grow bigger. “If you manage Shs1m, you can grow to manage Shs2m…then Shs4m…but many want to start big, without experience,” he says.
He adds that sustaining a business is not necessarily making profits. “As long as a business can pay its expenses, don’t close shop.”

“You can choose to cry now and laugh later or laugh now and cry later,” Sulaiman Mugejjera’s father always told him. And when his father unwittingly contradicted his own advice, the two disagreed.
The Bachelor of Commerce graduate snubbed white-collar jobs to start a graphics company from scratch.

Made in school
Mugejjera was in Senior Three at Kibuli SS when his teacher contracted him and his friend to design signs for a talking compound. Each earned Shs250,000. “That was our first time to get that much,” he recalls.
The teacher told them to pursue fine art as a serious potential business. Other teachers supported the two by hiring them for  modest pay.
“And every school club wanted me to be their member because I would do their branding for free,” says Mugejjera.
Going to university, Mugejjera had got government sponsorship but his father insisted on him pursuing a ‘reputable course,’ not art.

To take his father’s offer, Mugejjera asked for three-year tuition, fully-paid hostel fees and a car.
His father obliged. But on condition: “You don’t touch anything art.”
The son complied. And after graduating from Makerere University in 2009, his father connected him to major banks and oil importing companies. But this time, Mugejjera was determined to pursue his passion—art—and disagreed with his father. And he has never picked his transcript.
“To me, those jobs was the ‘laughing now and crying later’, dad always warned me against. But he had forgotten,” he says.

He returned the car to his father and moved on. In December 22, 2009, he registered Screen Graphics, a company that was not born yet.
He only had his old computer and phone, with no money to rent an office. He shared a room which his father had rented for his elder brother in Kibuli on Kakungulu Road.
When their father found out, he stopped paying the rent and the Mugejjera’s brother vacated, with six-month rent arrears.

He promised the landlord to clear the bills in two months, which he did. And the rest is history because now he occupies the entire two-room structure.  He deals in business cards, posters, stickers, magazines, invitational cards, trophies, etc.
For branding, his first major clients included Mukwano Industries, manufacturers of home-use products.
Mugejjera says his cost-effective and revolutionary rebranding ideas turned Mukwano’s fortune and cemented his relationship with the company.

“Mukwano’s owner chased me out of the first meeting, but today I walk straight to his office,” he says.
He did the same with Wide Spectrum, a pharmaceutical company, and Otada Group of Companies, among others.
Mugejjera also rebranded his former school, and “within the first three years, they had paid me more than my school fees for six years,” he reveals.
In return, he redesigned the school’s signpost which stands a few metres from his workshop, and other works, for free.

Switch to 3D metal
In 2013, a client ordered a 3D metal signpost. Mugejjera had no idea and tried to convince the client to go for plastic. But the client, who had seen it in the Philippines, insisted on what he wanted.
Mugejjera did not want to lose the deal but even his rivals offered no solution.
He ended up importing the material from Nairobi. “But it was very expensive.”
He already had issues with the other signposts: banners tear, stickers fade, plastic breaks, and is hard to maintain. So 3D metal was the ultimate solution: durable, beautiful, and outstanding. But he had to find a more affordable way to do it.

He would go to Nairobi for training. And after trialling with four signposts, he says, he had learnt the basics of sheet metal works, a form of welding that deals in lighter metals, and began making 3D metal signposts.
He has improved with more online training, mainly on YouTube.
But his fourth customer told him 3D metal is unique but not sustainable in the Ugandan market.
Another potential client promised to give him business if he made four years in the field. And when he met that threshold, he knocked on that client’s door again. The result is that striking signpost on Entebbe Road that directs you to Nkumba University main campus.

Mugejjera juggled conventional graphics with 3D metal until 2017, when one of his clients, a minister’s daughter, advised him to “concentrate on what others cannot do.” Since then, he specialised in 3D metal, and when you search for “3D signs in Uganda” on the web, Screen Graphics is one of the first results you get.
“Now I have the bragging rights in 3D metal signage,” he says, with an easy smile. “And that has helped my business grow from making losses to breaking even.” Interestingly, some of his clients come from Kenya.

Approach
Mugejjera says before he accepts your Shs4m-offer for branding, he first improves your company’s logo because he believes a logo is key to branding.
I was mostly fascinated by a signpost that has a fish in the background, advertising one of the suburban beaches. 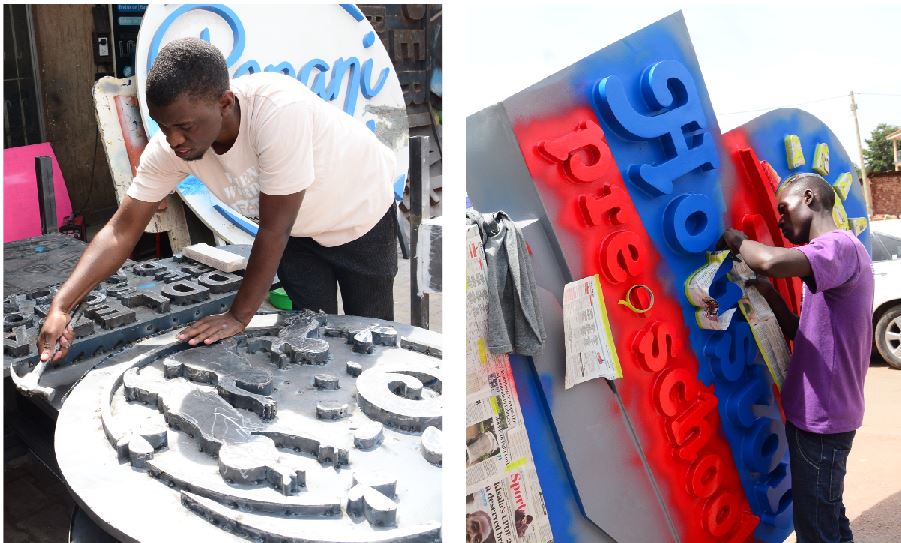 Mugejjera fixing one of his jobs. Pictured right is a worker making final touches on a signpost.

“I will never make another one like that,” he said. “I do not duplicate signposts.”
Even when middlemen bring templates, approved by clients, Mugejjera alters them into something unique. “I develop things out of imagination, not imitation.”

He believes: “If you want to be good in business, do nice things; but if you want to stand out, do different things.”
At first, the closest imagination of a 3D metallic signpost the clients had was a metallic door, which was not fancy.
“We could labour to convince them. But nowadays, clients are attracted by our works elsewhere.”
He cites one signpost for a hotel in Mukono which has generated 12 clients in one year. “That’s the beauty of referral business.”

Feedback is key. “If a client reports a complaint against my worker, I ensure we sort it immediately.” One of his clients, a newly-elected Member of Parliament, called him on the phone during our interview, seeking to rebrand his kindergarten into a primary school. Mugejjera also advised him to hire people to clean the school’s signpost mounted on a dusty road.

He employs  10 staff. “Even those I have worked with for six years know they are not permanent; their stay strictly depends on their productivity,” says Mugejjera.
Having sustained his company for 10 years in Kibuli, a place unfriendly to businesses, Mugejjera no longer believes in location as a factor.
“Now customers trust us for longevity—for being in this business, this place, for 10 years,” he says.
But he adds that quickly embracing online marketing was wise because by 2012, he already had 60,000 Facebook followers, many of them, clients. The cover photo of his company’s Facebook page is a collection of signs for some of his customers including schools, groceries, restaurants, hotels, pharmaceuticals and more.

Advice
He advises people to start small and grow bigger. “If you manage Shs1m, you can grow to manage Shs2m…then Shs4m…but many want to start big, without experience,” he says.
He adds that sustaining a business is not necessarily making profits. “As long as a business can pay its expenses, don’t close shop.”
Mugejjera calls himself a realist, who discourages businessmen who devour short-term profits. “That curtails business, and eventually kills the goodwill and customer trust—priceless things money cannot buy. Plough those profits back into the business to boost your capital.”

Peers call him an underachiever because he does not keep a fortune in his bank account. He has not built his dream home. He drives a modest Toyota Noah. “But I do not care. Entrepreneurs believe wealth isn’t what you keep, rather what you can use it for,” he says. “The health of my business comes first.”  Your brand, he believes, is what people say about you in your absence.

His clients agree: “We have worked with Sulaiman since 2014. He helped us appreciate the value of symbols, colours, branding, and a social media presence in our work,” Musa Ssemanda, marketing manager of Wide Spectrum, told us via WhatsApp.
“When we decided to rebrand, he took the journey with us and we have always found his work to be of high technical quality,”  added Ssemanda.

Process, challenges
A 3D metal signpost costs between Shs600,000 and Shs2m, depending on detail.
Mugejjera’s business survives on customer deposits. Material depends on the type of work. The work involves designing, cutting, building, composing, and spraying.
The spraying takes eight layers over four days, to beautify metal to make it look like it isn’t metal.
That takes about three weeks but to avoid frustrating customers, “We ask for four weeks, considering disruptions such as power outages, rain,” says Mugejjera.  Actually, the day we interviewed him, Mugejjera had received a warning from Umeme about a power shutdown the following day. Such shortages are common yet most of his machinery cannot be powered by a generator.
He dodges media interviews because if clients contact him directly, the middlemen, who connect him to most customers, lose business.

Mulgejjera explains how he goes by his work.

In mid-March, Mugejjera was still concerned about the unstable political climate. “People fear investing under uncertainty.”
What about fake raw materials? “Suppliers know that I can easily tell fake from genuine. They don’t take chances with me.” He also urges government to support young entrepreneurs.

The future
Mugejjera does not know his company’s worth because its revenue fluctuates too often. Hence, an external auditor told him to gauge its performance by customer traffic.
He wants to build a warehouse; and open branches for his growing clientele in Mbarara and other regions. He also wants to establish a vocational school to share his knowledge.

His personal Facebook account carries the title project manager, Parallel Series Ltd, a company he is building to handle a megaproject he expects to supersede Screen Graphics, but is still a secret due to its procedural sensitivity.
Rebranding his father’s cry-now-laugh-later advice, Mugejjera says he will never stop crying…for more success.

Court ruled that the complainants just want to attract the attention of the public and also to justify their existence as bodies concerned with...

Family of 10 killed in Israeli strike on Gaza