Passion
Emmanuel Bagwana is one of the resilient and multitalented fashion designers in Kampala. He has brought five new designs in various colours and prints. The fashionista loves making ready-to-wear clothes and gowns which he describes as ‘easy on the body.

Tools
To kickstart his enterprise, Emmanuel Bagwana acquired things such as needles, thread, trims, drafting equipment and the like as well as transport to and from Kiyembe, one of the wholesale fabric selling spots in Kampala.

The fashion design business presents many opportunities because with creativity, one can have a chance at making a mark.
The international market seems to be calling, particularly with a demand for ‘‘made in Africa’ ,which presents an opportunity for creative and consistent designs on the continent to put their A-game on and conquer the world.
According to fashion entrepreneur Emmanuel Bagwana, Uganda has not stopped hoping onto that since fashion is a major foreign exchange earner and job creator.

To him, it is time for the local industry to tap into e-commerce and target the huge market out there.
That is not to say the local market is satisfied. It is only untapped. “There are opportunities in pattern cutting, supply of luxury fabrics and trims, development, illustration, styling, modelling, photography, textile, hair and beauty, mass production and lots more,” he argues.

Carving a career
Talking of carving a career in the seemingly virgin sector, Bagwana, a creative director for Eguana Kampala, a Ugandan fashion brand advises fashion enthusiasts to go in prepared for an exciting, extremely competitive and unpredictable journey.
Eguana who deals in men’s and women’s wear that fuses African and western fashion styles, advises a budding or enthusiastic fashion designer to be passionate about it, otherwise they would give up pretty fast. In essence, having a clear vision and knowing their target clientele is key.

“You would need to have an aesthetic and develop it through your career. Also don’t be too rigid, if something isn’t working it probably isn’t meant to be. They should also know that it’s a business not a form of entertainment so come prepared to work very hard,” he further advises.
Bagwana, whose experience spans over a decade, wanted to become a designer ever since he was a child.

How he started
He started small and recalls the difference between the reality of the unpredictable working world from his expectations after fashion school. “Starting small gives you a soft landing in case of some unpredictable occurrences unlike starting very big where a small crisis can lead to a far reaching financial disaster. When you start small you are able to develop your brand from the grassroots as well as test out different things and get rid of those that do not work without much effort,” he observes.

At home, there was a Singer sewing machine which he later on used to start his journey as a fashion designer. From baby steps, he took a bold one to enrol at Evelyn’s College of Design in Nairobi where he studied fashion and design.
After graduation, he started working from home on a small scale mostly dealing with relatives and friends who then recommended him into their networks.

Doing it differently
He can be defined as a ready-to-wear and street wear designer with an Afrocentric aesthetic.
To make his designs stand out, Bagwana always tries to come up with something new from scratch as opposed to copying and pasting someone’s work.
Sometimes a fabric or colour may be similar to another but as a designer, it is his job to reinterpret it differently. That comes from being able to earn from his passion especially when he was starting out.

“I was able to make some bit of pocket money from a few sales I made through family members. The breakthrough is a work in progress. I am still in the process of building a great Ugandan fashion brand,” he adds.
His brother’s house was his first working station. To kickstart his enterprise, he acquired things such as needles, thread, trims, drafting equipment and the like as well as transport to and from Kiyembe, one of the wholesale fabric selling spots in Kampala.

Training on the  job
At the beginning, business was a little unstable. It was a phase in which he made many mistakes as learnt on the job. While he burnt his fingers, he became keen on the traits that make business work. He invested time in studying the market as well as making his product commercially viable. To him, it didn’t help churning out pieces everyone loved to see but not own. He had to find that balance, and as he adds, it is still a work in progress as the market for local products has now expanded to a global market. His journey has been a learning stretch.

He has learnt to be patient and the importance of research. “In fashion, it is important to grow organically. If you go up too fast, without a clear plan, you may come down just as fast. Teamwork, networking and focus under extreme pressure is a norm in our industry,” he says.

Marketing
Family and friends remain key in his journey. They were his first clients and have kept on recommending his products within their networks. Associates in the fashion industry have opened doors for him.
For example, thanks to his network, he has been able to work and showcase alongside talented fashion designers at some of the notable fashion events in Africa.

He is emphatic on the benefits of networking to his business. “A lot of our business has come through word of mouth recommendations so my networks have been very beneficial to the business,” he says, adding: “Networking has also helped me to meet and work with influential people in other sub industries that fall under the fashion industry which has made the brand more visible.” 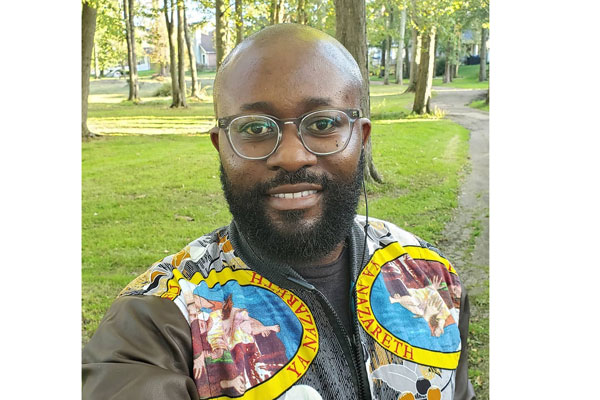 Bagwana plans to build the biggest fashion brand in Uganda

Builds brand
Even then, he is careful to draw a line between business and friendship. In the past it was a very blurred line but now that he deals with friends in a more professional way, when it is time for business, he is keen on seeing to it that business is transacted without butting the eye albeit cordially.

That is a sure way of tapping into their loyalty as return clients who recommend his fashion outputs to other people and in essence boosting Eguana’s visibility as a brand. Brand growth is top on his wish list.

Quality
His clients include a cross section of men and women from different backgrounds and age brackets.
“We retain clients by offering quality and unique products, providing it at the agreed time or communicating clearly in case of any changes and most importantly offering great customer service,” Bagwana says.

His big sales are normally on bridal outfits. He incurred his biggest losses at the beginning. “I lost money at the start of my career and were quality and time related. I once got an express job to dress a large number of ushers for a major telecom company and someone I worked with failed to finish the waist coats that they were meant to wear in time. The client was very angry and did not pay so we had to incur a loss of Shs1.5m which was a large sum at the time especially for a small upcoming business,” he recalls.

Challenges
One of the biggest challenges he has faced is the size of the market. It is quite small so running a fashion business comes with its own financial challenges that call for financial caution. Bagwana adds that at the start of his fashion design career he dealt with payment defaulters which affected his meagre cash flows. Power cuts were the other hurdle which would lead to failure to complete jobs on time. “Penetrating the market outside Uganda is also still a major challenge due to high shipping costs as well as lack of organised mass production facilities that are able to produce our quantities which may not be as large as what they are used to producing,” the fashion entrepreneur says.

The market has substandard fabrics and trims. To mitigate the challenge, they started stocking with ‘Bold in Africa’ a Kisementi-based retail store that carries different African brands. Additionally, he has established relationships with sellers whose quality he trusts. He also tests every trim and fabric before sending it to the market.

“As far as people defaulting on their payments we have had to come up with a very strict policy whereby someone has to deposit on their order and has to clear the bill before taking it out of the workshop,” he explains.
With power cuts, Bagwana limits on taking orders especially during peak season to avoid disappointing clients. The lessons the challenges have taught him is to remain calm despite the crisis at hand.

“In fashion you will always have challenges since nothing happens as you plan so you should always have a plan B and C and D. If you are the type that panics during a crisis this may not be the industry for you,” he observes.
He works with five tailors on a full time basis. If work requires more hands, he contacts some who work as freelancers.