Advertisement
By ESTHER OLUKA
More by this Author

Emily, a Canadian, met Kimanje, a Ugandan, during a brainstorming meeting in Uganda where they discussed the nature of children in the Media Industry in both Africa and North America. Over time, the two fell in love, eventually getting married and starting a family in Canada.

So, how has marriage been so far? Kimanje says he had no choice but to make some adjustments.
“Before getting married, I used to be the kind of man who would frequently travel to handle projects in different countries. But after exchanging vows, I had to slow down to invest energy and time in my marriage,” Kimanje says.

On the other hand, Devries, says it feels like they have been married much longer than three years. With two children, a production company, and a relationship to nurture, day to day life feels natural, most of the time. The couple, however, feel they are missing out on alone time because of the numerous responsibilities they have.

Life in Canada
Life in Canada has not entirely been smooth, especially for Kimanje.
“There are occasions where my wife is either treated differently (compared to him) or accorded more attention by people here,” he says.
According to Kimanje, there is assumption by some sections of white people that every black man they see on the street is dangerous.

“Just the other day, I was taking a walk with my wife and sons when suddenly a white man driving a truck slowed down and began uncomfortably looking at us. When my wife stared right back at him with concern, he sped away. We have encountered a number of similar drivers in the past,” Kimanje says.

And sometimes when the father of two is walking alone or out on a run, he notices some people deliberately avoiding him on the street. Devries says Canada has had its own fair of issues involving oppression and violence geared towards people of colour.
“It’s often harder to notice it here though because people will appear to be nice, yet, deep down, they aren’t,” she says.

And for such reasons, Devries says her husband is lately taking time to teach her and their children the significance and uniqueness of being a person of colour. 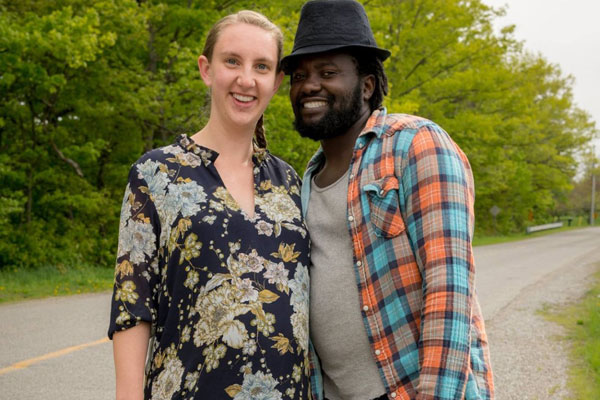 Handling issues
At some point in their marriage, Kimanje felt that his wife was thinking and making decisions on his behalf.
“For example, there were times someone would ask me a question and then she proceeds to answer. I did not like it,” he says.

Eventually, Devries realised her mistake and stopped making decisions on his behalf. For prominent issues that surface in the marriage from time to time, Devries says she has personally learnt to deal with them by having conversations with her husband, praying, and waiting in anticipation that things will get better with time.
On his part, Kimanje says in circumstances conflicts arise in the marriage, sometimes he walks away to cool off before later resolving a particular issue with his wife.

Life as parents
Currently, the couple have two sons; Israel, aged two and Noam who is five months old. Like most parents, the couple are fond of their children and have nothing but phenomenal words to speak about them.
“Israel is always going to be daddy’s champ. I remember after he was born, I felt like I had won the lottery. Noam on the other hand is daddy’s rock. Whenever I am stressed, I look at him and he smiles back,” Kimanje says.

Devries on the other hand says Israel is very smart and loves anything to do with music while Noam is bright-eyed and so full of joy.
The couple says the confidence they have in their role as parents is rewarding and significant as they are raising children of faith and purpose.

Speaking of which, the duo have made it a point to blend their different racial backgrounds into their children’s lives. They find it crucial that the children learn both cultures and languages.  For instance, Kimanje often communicates using Luganda, his native language and later makes an interpretation. Once everything normalises after the Coronavirus pandemic, the family will be visiting Uganda from time to time to spend time with Kimanje’s family.

Words of wisdom
Kimanje says couples should pray to God to bless their union while Devries advises individuals to always take time to learn their partner’s background as well as bear in mind that love is a sacrificial choice to put someone else ahead of themselves.

“Love is not an easy thing to do long term, but that is exactly what marriage is, and that is exactly why we often make those promises in front of God. When it gets hard to love your partner, remember the promises that you made and hold up your end of the deal,” she concludes.

Man who handed NUP to Bobi held for own safety, says Brig Byekwaso

Mr Moses Kibalama is being held for his own safety, according to UPDF

Bishop-elect of Kumi sues Church of Uganda over cancelled consecration