By the time of his death, Awori, a diplomat, a journalist, and athlete, had held coveted positons in the regimes of presidents Milton Obote, Tito Okello Lutwa and Yoweri Museveni, writes Emmanuel Mutaizibwa .

The final bell has tolled for former Samia Bugwe North MP Aggrey Awori, one of the most gifted orators of his generation to ascend the greasy pole of politics.
For his contemporaries, Awori did not need majestic robes to join the political aristocracy but time, place and impulse usually brought him closer to the holy grail.
By the time of his death, Awori had held coveted positons in the regimes of presidents Milton Obote, Tito Okello Lutwa and Yoweri Museveni.

By the time he moved away from the public gaze, his voice shaky and strength diminishing in the sleepy rhythms of Kibimba’s terraced rice fields in Bugiri District, Awori had spent his last days trying to navigate the fault-lines of Uganda’s politics.

“It’s very hard to get any resources for development for a particular area or particular sector of the economy as long as you are waving the opposition flag. These people who are controlling money in the country have not invested it in the productive sector of the economy, which could have allowed people to have a good life,” revealed Awori during an interview with NTV at his country home in 2019.
His imprint on major pieces of legislation in the Sixth and Seventh Parliament turned him into an affable leader respected across the political aisle.
His great talents transcended politics.
By the time he completed high school at Kings College Budo, Awori’s mercurial gifts had the world eating out of his palms.

His father, an Anglican canon, Jeremiah Musungu Awori, rejected an offer for his son to join the prestigious Royal Military Academy at Sandhurst,UK.
Awori was able to dovetail academics and athletes. He bestrode the track and field like a colossus with his gliding strides that sent his competitors trembling.
From 1965 to 1971, he studied at Harvard University on a scholarship. The first year he took nuclear physics, but then switched to political economics.

While at Harvard, Aggrey became the first student in heptagonal track history to win three events - the long jump, high hurdles, and 60-yard dash, tying the heps record in the hurdles and setting the mark in the dash. He also ran on the victorious mile relay team that tied the heptagonal record.

By the time he graduated from Harvard, Awori held three outdoor and five indoor school records.
He also represented Uganda in the 110 metres hurdles at the 1960 Summer Olympics and the 1964 Summer Olympics, but failed to win any medals.

He returned to the country and caught the eye of the president who appointed him as the director general of Uganda Television (UTV).
But at the advent of the 1971 Idi Amin coup against the Obote I regime, Awori was briefly detained. “I was the first journalist or media person to be arrested during the coup of January 25,1971. That nearly ended my life; I had known Amin for sometime, we had been interacting, he saved me out of his mercies,” he said.

Awori claimed that he was privy to the plot to oust Obote and tried to warn him.
“Amin knew that he had been planning the coup and I was aware, although I had alerted Obote, but Obote did not take it seriously. So Amin said if this man could keep my secret, I better save him,” he added.
Later that year, Awori, with the help of Amin’s senior army officer, Maj Gen Francis Nyangweso, fled to exile in Kenya.

Awori taught journalism at the University of Nairobi until 1976 and then travelled around Africa, visiting Tanzania, Liberia and Senegal and returning to Nairobi in 1979.
In the aftermath of the December 1980 presidential election, Awori advised Obote to give Mr Museveni a coveted ministerial position to lure him out of launching a guerilla war.

“We knew that he planned to go to the bush and some of us tried to bargain with Obote that we bring him into government and we contain him. There was even a famous statement attributed to Obote that we shall find him in the bush and leave him there,” said Awori.
Museveni on February 6, 1981, alongside a few of his followers attacked Kabamba barracks, which resulted in a five-year guerilla war that left thousands dead and Uganda’s economy in limbo.

It was not so long that Awori warned Obote about the dark clouds that hovered above troops stationed at garrisons.
At the peak of destructive poker games that led to the 1985 coup against the Obote II regime, Awori, who was then Uganda’s envoy to the United States, was among those who knew about the plot by senior UNLA army officers Tito Okello Lutwa and Bazilio Okello to oust him.
Acholi officers rebelled against Obote barely after he appointed Brig Smith Opon Acak as Chief of Staff to replace the charismatic David Oyite Ojok who died in helicopter crash while flying over Luweero in 1983.

“Tito [Okello] was leaving, he was very angry. He [Tito Okello] called me up in Washington. He said I have been trying to see your friend; he used to call Obote my friend but he [Obote] won’t see me. Tell him if he won’t see me by lunchtime, I am gone. I called Obote and told him and he said those are threats, let him go. That was the last time Tito was seen in Kampala. He only came back as president,” revealed Awori during the interview with NTV in 2019.
Awori believed that Obote could have presided over Uganda for a longer period if he wasn’t a victim of intrigue from his acolytes.

There are accusations that Awori lent his support to the Tito Okello Lutwa-led conspirators but a former minister in the Obote II regime James Rwanyarare told Daily Monitor on phone that, “I was an insider of Obote but never established it.”
On the contrary, Rwanyarare says Awori was ‘a good man, clever and charming and Obote discovered him because he was good at identifying talent.’ Awori who had earlier on been appointed as the envoy to the EU by Lutwa and briefly served during the Museveni government in the same position, was later dropped in 1987.
“My job was really to buy guns,” he said in the television interview with a grin.

After a brief asylum in Nairobi, Awori started to build up a rebel group operating from eastern Uganda named Force Obote Back Again (FOBA).
He stated that his reason for doing so was mainly anger at Museveni’s National Resistance Army, which had confiscated his property. In 1992, he dissolved his rebel group, which had consisted mainly of young fighters. In 1993, Awori met with Museveni and current Security minister Jim Muhwezi in New York, in the United States and returned home. He was later elected to the Constituent Assembly in 1994, which enacted and promulgated Uganda’s 1995 Constitution.
He later on served in the Sixth Parliament. 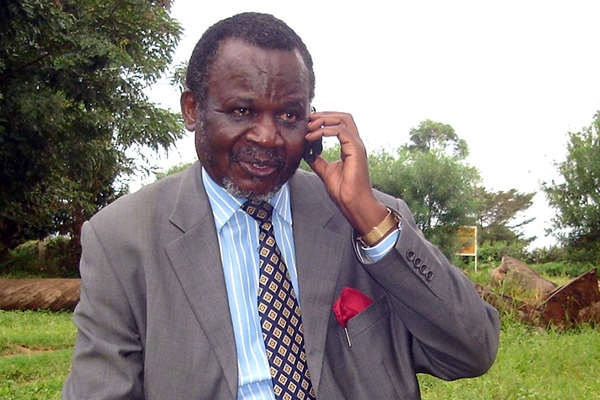 Aggrey Awori at Mbale High Court on July 19, 2006. This was during the hearing of his petition against the election of Samia Bugwe North MP Stephen Mugeni . PHOTO/FILE

In 2001, Awori threw a hat in the elective ring. He promised to rely on his vast array of friends, including his classmate at Harvard University, former US vice president Al-Gore, to marshall a financial war chest and win the election.
“I can pick up the phone and call Omar-Bashir [then Sudan president] and Dos Santos [Angola’s then president],” he often boasted.

But he ran into logistical hurdles as his ailing helicopter, which flew him across the country to campaign, at one time ran out of fuel.
He came third in the presidential election where he polled a paltry 1.41 per cent of the vote.
He was re-elected and served in the Seventh Parliament.
Together with other generational leaders such as Ben Wacha, Okullo Epak, Winnie Byanyima, Beatrice Kiraso, James Mwandha, Nobert Mao and James Kazoora, Awori, who spoke in the tongue of poets, enriched debates of the Hansard and resisted the fancies and whims to turn the House into an appendage of the Executive.

Usually run-of the-mill politicians who were feeding on fabled tales that he was a Central Intelligence Authority (CIA) agent, often gathered to listen to him. There were suggestions that Awori received covert briefings from intelligence agencies about unfolding coups and intricate governance issues in Uganda and the volatile Great Lakes.
In turn, Awori revelled in this fame and reporters usually sought him in the corridors of Parliament for scoops.
Yet under this welter of suspicion, Awori remained a noble statesman.

He was the first lawmaker to reveal that the presidential jet flew the first daughter to Germany to give birth, which cost the taxpayers $ 50,000.
The story elicited a public backlash.
The President defended the cost, arguing that his family faced a direct threat from the country’s enemies in the region.

Awori later revealed that an under-cover agent posing as a journalist at one of the major US publications was probing Rosa Whitaker, the first ever Assistant US Trade Representative for Africa, during the administrations of presidents William J. Clinton and George W. Bush for soliciting a bribe.
It was later revealed in the LA Times that Whitaker had received $ 300,000 from the Ugandan government to promote Uganda’s goods under the African Growth and Opportunity Act (Agoa). 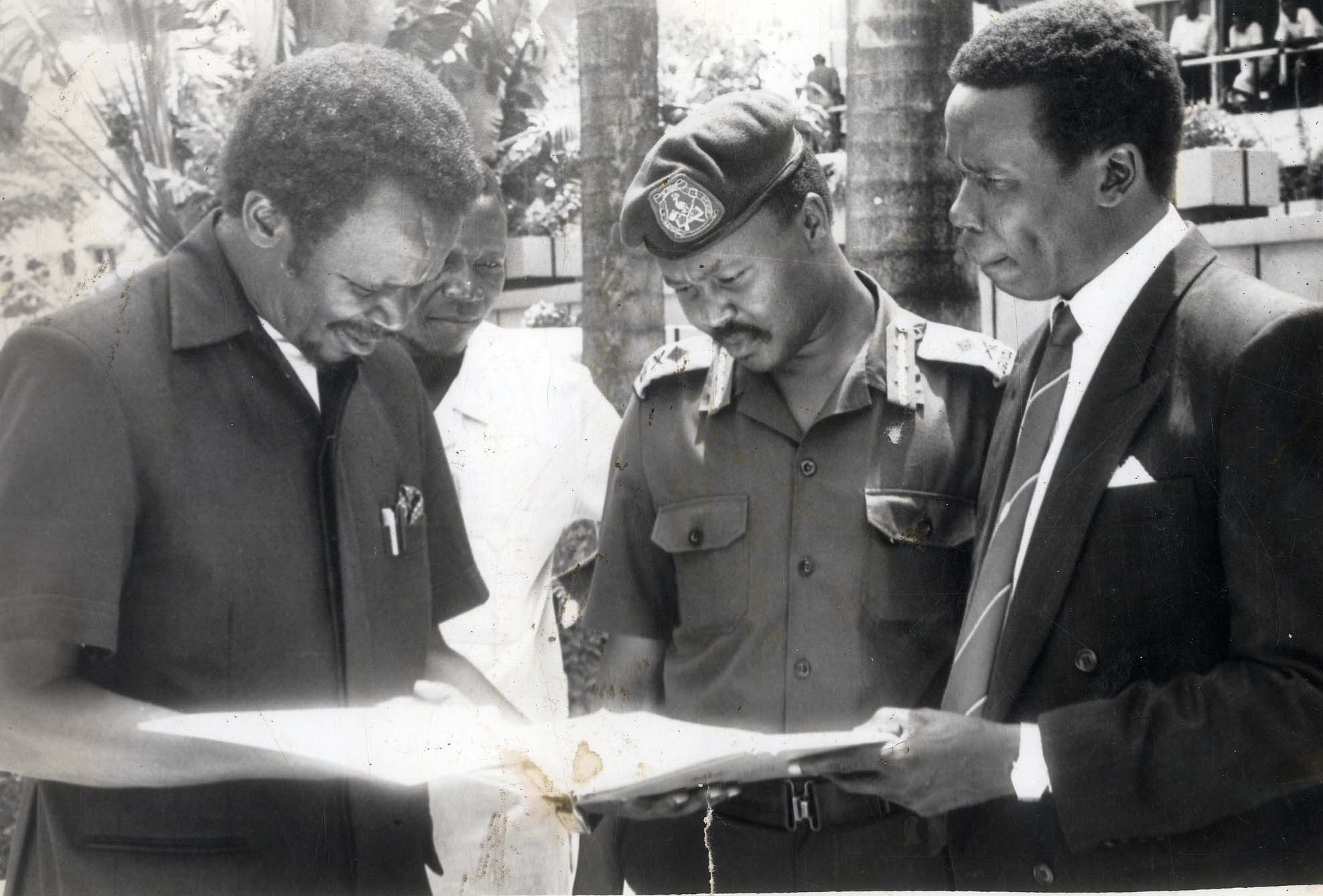 In 2009, he was appointed as ICT minister and later dropped in 2011. He revealed that he decided to join NRM as way of attempting to bring to an end the polarising politics and upon the persuasion of his brother, former Kenya vice president Moody Awori.
Most of Awori’s family consisting of 15 siblings chose to cross the ‘imaginary’ colonial borders and live in Kenya.
The Awori dynasty has trailed the blaze across politics, the corporate world and business and academia in East Africa in the footsteps of their evangelical patriarch, Jeremiah Musungu Awori.
Awori’s brother Moody Awori was vice president during President Mwai Kibaki’s government and his other sibling Hannington Awori was chairman of Nation Media Group (NMG) among a host of other blue-chip firms in Kenya.

His other siblings; Prof Nelson Awori carried out Africa’s first kidney transplant at Nairobi Hospital in 1978 and his sister Dr Mary Okello was Kenya’s first woman bank manager and founder of Makini Schools.
His son, Baisama Awori, told Daily Monitor that the late politician was a doting father and a selfless man. “He was a maverick during his high school days and adopted unconventional methods to protest what he viewed as wrong,” revealed Baisama.

Awori was a voracious reader who wore many hats: a diplomat, a journalist, a politician and an athlete.
He died on July 5, 2021 at a private hospital in Naalya, Kampala at the age of 82.
He was married to Thelma Awori, who worked as Director for Africa at the United Nations Development Programme. Together they were the parents of six adult children.

Background
Aggrey Awori served as minister for Information and Communications Technology in February 2009 to May 2011 Prior to that, he represented Samia-Bugwe North in Parliament from 2001 until 2006. Awori was an outspoken Opposition member of parliament for the Uganda Peoples Congress (UPC) political party. In 2007, he abandoned the UPC and joined the ruling National Resistance Movement.

Ms Ssentamu says Justice Wabwire failed to determine her petition on merits thereby, derogating her rights to a fair hearing