The Elgon region has always attracted a huge number of foreign tourists, thanks to its various natural attractions and a rich culture. It is, therefore, little surprise that the region has been badly hit by the Covid-19 pandemic. Industry stakeholders and government are, however, devising strategies to help resurrect the sector.

Advertisement
By YAHUDU KITUNZI
More by this Author

Before the coronavirus pandemic struck and changed the world, the Elgon region was one of the thriving tourist spots bringing in millions of shillings in annual revenue. Found in eastern Uganda, the Elgon region is home to several tourist attractions, including Mt Elgon National Park, Sipi Falls, bull fighting, culture tour, Wanale Ridge, coffee tours, and Bamasaba Imbalu, among others.
According to Uganda Wildlife Authority, the region received between 1000-1500 clients a year before Covid-19 struck.

But with the pandemic and consequent lockdown, tour companies, hotels and game parks the numbers have significantly reduced to the tens. Many foreign tourists and business travellers postponed or cancelled their travel to Uganda, leaving hotels and cultural tours abandoned.
At Sipi Falls, known as the hikers paradise located in Kapchorwa District, a majority of bars, hotels, and lodges still remain vacant.

Ruth Akello, a supplier of poultry products in the region, is currently out of business and also had to sell off her car to pay off a business loan.
“I had got a loan of Shs15m before Covid-19 hit but I failed to pay it back following the closure of hotels. When the money lender threatened me with arrest, the only solution was to sell personal assets in order to raise money for the loan payment. So I decided to sell my car,” Akello shares.

However, following the easing of the lockdown, UWA announced the opening of parks for tourism but with several Standard Operating Procedures (SOPs) to be followed by both tourists and staff to avoid the spread of the virus.
UWA also announced a host of incentives aimed at reviving the tourism sector.  The incentives include reduced fees for several activities in the various parks and an extra free day, among others.  UWA has also provided commission for tour operators who bring visitors to the country’s parks.

Projections
Christine Lynn Nakayenze, a senior warden in charge of tourism at UWA, notes that although the sector was badly affected, it is slowly picking up with about seven to 10 visitors a day.  This is a significant drop from the more than 40 visitors they used to receive before the pandemic.
“It is going to be a process. We need between eight  and 10 months to recover from the economic shock,” Nakayenze projects.

However, even with these incentives, business is still at its lowest. Saleh Namenya, the chief executive officer of Casa Uganda Safaris and Lodges, decries the persistent lack of clients.
“Guest numbers have continued to plunge and we were forced to send our staff home. We have only kept key staff,” Namenya says.
This lack of business has put the future of several tour companies in peril, especially those with bank loans to service.

“In addition to servicing their loans, some establishments are also struggling to meet other financial obligations such as water and electricity bills, salaries and taxes. We want leaders to evaluate the impact of the pandemic before collecting money from us. Businesses are trying to recover yet the government wants revenue from our businesses. If we cannot afford to pay salaries,  how does the government expect us to be able to get NSSF?” he wonders.

Casa Uganda Safaris and Lodges, based in Mbale City, operates in the entire country. The company had projected to have the best financial year with several bookings.
“We expected to make good money this year. But when they closed the airport, we refunded the money to the tourists that had booked after cancelling their trips to Uganda,” says Namenya.

In a bid to attract more clients, Namenya says the company has since invested more in information technology such as developing social media platforms and an app.
“Covid-19 has helped us to rethink businesses, creativity and innovation. We have also started pricing and packaging afresh,” he says. Namenya appeals to government to invest in tourism in the country to attract revenue.

“We need to attract tourism. The eastern region has only one national park. We need the government to upgrade Pian-upe. The roads are also poor and yet roads are a crucial element of the industry,” he remarks.
According to Namenya, the government has a role in supporting businesses to recover from losses.
For Dennis Mukungu, a tour guide, the lockdown has had both a positive and negative impact on the sector.

“Hotels are operating at half capacity, which means jobs have been lost in the process. However, lodges and hotels in the region and across revised their rates to attract the local clientele.   The revised hotel rates also enabled the tour companies to offer affordable and attractive customised packages for the locals, giving our people an opportunity to enjoy services normally reserved for the wealthy and the foreigner,” Mukungu notes.

But there is not enough traffic from local tourism since tours along Mt Elgon National Park, Sipi falls, Pian-Upe wildlife reserve, Wanale Ridge, Bamasaba Cultural Imbalu, the safari vehicles that normally ply the tourism sites in the region are abandoned and luxury camps gather dust. 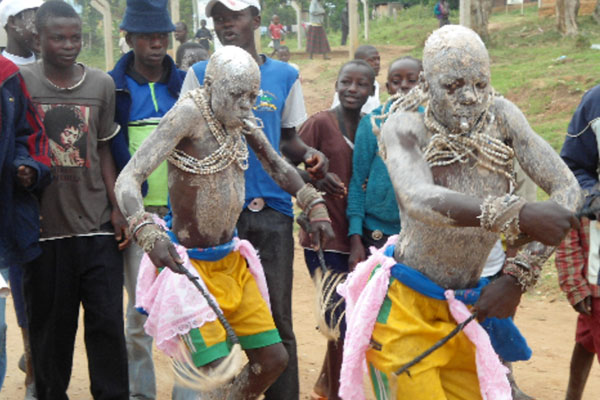 Below: A group of boys perfom the Imbalu circumcision dance at a ceremony. The ceremony is one of the popular cultural attractions for the Elgon region. Photo/File.

Lessons
Elvis Masiga, the chief executive officer and founder of Lulu Safaris Uganda, says the lockdown devastated the tourism sector.
“Most tour operators woke up to no inquiries from tourists. There has totally been no business for us.  Everything that supports our trade such as parks, hotels and resorts were all closed. We also learned a few things such as not to keep all our eggs in one basket and to embrace local tourism,” Masiga says.

He advises Uganda Tourism Board (UTB) and government to borrow a leaf from our neighbours Kenya and Rwanda on how to effectively promote tourism in Uganda more than before.
Masiga reveals that although his company has only four permanent staff, it provided jobs for other support staff that has since been made redundant.

“We have been greatly affected and we are still planning how to recover from the economic shock which left us in debts. We are now doing local safaris, the little money that we get out of this helps also in boosting social media platforms and online marketing. We have to do intensive marketing to lure more tourists and also stay positive and accept the new changes that have come along the pandemic,” he says.

Counting losses
Isaiah Weboya, the general manager of Elgon Hotel in Mbale City, says the sector has lost many jobs as a result of the restrictions of international movements. He said although the government lifted some restrictions, the turn up of the guests is still low.

“Many people cannot afford to come to the hotel to have a meal or accommodation because of the effects of the Covid-19. People are doing badly economically,” he notes.
According to the manager, before covid-19, they were receiving about 70 tourists every day, a figure they are yet to see again.
The managing director, Rocky Hotel in Mbale City, Lucy Chemtai, describes the current situation as a big blow to the sector.

“We have been counting losses since the outbreak of Covid-19 in the country. Business has gone down dramatically. It has affected our income. The orders have gone down and investors are struggling  so hard they can barely sustain their businesses,” Chemtai laments. She is, however, hopeful that with the reopening of borders and Entebbe International Airport, business will eventually return to normal.

“We have seen a spike in bookings this month but it will take some time to recover from the Covid-19 lockdown-induced losses. People still do not have money and we are getting few clients at the moment. The curfew also affects our revenue. People are always in fear of being arrested and, therefore, their stay with us is always brief, which means they spend less than they would have spent if they were not limited by time,” she says.

Attractions
Sipi Falls
Sipi Falls is popularly known for its three water falls. There are walks and hikes that start from varying points the most common being that which starts at the Sip falls River Lodge.
The Sipi falls area is the starting point for many hikes up to Mt Elgon. Hikes around the sipi falls offer stunning views of the Karamoja plains, Lake Kyoga and the slopes of Mt Elgon.
Some of the activities at Sipi falls including Sipi coffee tour, Sabiny cultural walk, abseiling and rock climbing among others.

In addition to servicing their loans, some establishments are also struggling to meet other financial obligations such as water and electricity bills, salaries and taxes. We want leaders to evaluate the impact of the pandemic before collecting money from us. As businesses are trying to recover yet the government wants revenue from our businesses. If we cannot afford to pay salaries how does the government expect us to be able to get NSSF?” Saleh Namenya, the chief executive officer (CEO) of Casa Uganda Safaris and Lodges, decries the persistent lack of clients.

Was Bobi poll petition case stronger in press than courtroom?

But as Derrick Kiyonga and Joel Mukisa write, the singer-turned politician seems to have prosecuted his case more during press conferences than...

Among the teams canvassing votes for the two rivals for the Speaker of Parliament job are MPs who were defeated in last month’s election but are...