During geography lessons back in high school, our teacher introduced us to the the formation of hot springs. Stories of boiling water with temperatures high enough to boil an egg or prepare a hot beverage known as bushera were some of the exmaples he shared.
My curiosity became eminent when I discovered that there were hot springs in my home district, the then Bushenyi District, from which the present Sheema District was carved.

Eleven years later, I started planning for an adventure to explore the hot springs and I sold the idea to a friend. One morning, we donned our heavy jackets, boarded a motorcycle from Bushenyi Town to Kitagata. It took us half an hour to reach our destination.
We were welcomed by a gentleman collecting entrance fees from tourists  who wanted to access the site.  We later learnt from him that this money maintains the site. He also told us that they use the money to buy sacks, which they fill with soil and later place on the shores of the springs to prevent them from flooding.
After making payments, we proceeded to the place, where we found semi-nude men and women, and children enjoying a warm bath. 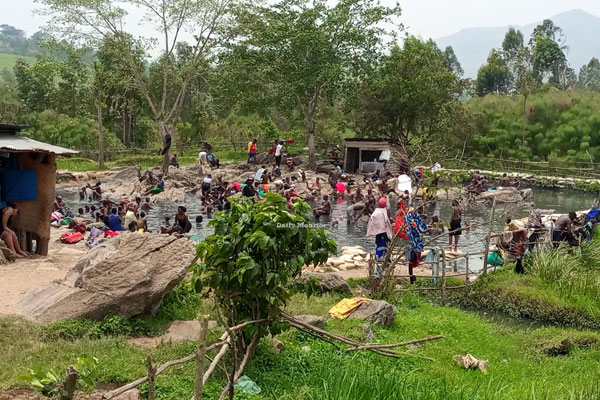 Questions
I had many questions though. First, I could not believe that sane men and women would travel from near and far to strip naked at the facility.  I also wondered how hundreds of people bathed in the hot springs at the same time without caring about contracting diseases.

There were also myths about that  water from the hot springs was medicinal that I needed to debunk.  Although one of the tourists told us the springs contain minerals that do not allow transmission of infections, I was not convinced. I needed more explanation.
Alice and I did not rush to soak in the waters. We squatted on the rocks and dipped our hands in water to have a feel of its warmth. We discovered that there were varying temperatures in different spots of the springs.

It is at this point that I witnessed people preparing millet porridge using spring water. I was curious to see eggs boiling, but we were told temperatures had significantly reduced that day.
We resisted the temptation to strip and bathe in the springs. After three hours of touring and listening to stories about the hot springs, we took pictures and exited.

Before we boarded, one of the tourists called us and asked if we would consider visiting other hot springs. “Are there other hot springs within this same locality,” we wondered. He answered in affirmative and volunteered to take us to the second one.
We discovered that there are two hot springs; Mulago, which is named after Mulago National Referral Hospital and Eky’omugabe, formerly used by the king of Ankole. We were told that the one we visited first was Mulago and the second one was Ekyomugabe.

Second trip
In May 2018, during my honeymoon, my wife and I decided to visit the site and spend evening hours in the hot springs. We sold this idea to our friend and his wife and they were excited.
We set the date, pooled money, hired a vehicle and packed some food and drinks. On a Saturday, we left Bushenyi Town and reached Kitagata at 7:20pm. It was a cold evening. Mist had formed around the springs but we had to soak in the warm water, anyway. At first, I was shy to appear naked in a public place. It took me time to decide to undress but seeing my friends enjoying the warm bath, I gained some confidence and threw my clothes on the shore.

The moon shone sporadically and steam was curling up and disappearing in the papyrus reeds. Dipping my feet and later the whole body in the warm water was magical. I was, however, careful enough not to scald myself in the hotter section of the spring as water bubbled.
On the western side of the spring stood Muhito hills, rising towards the sky.  Forty minutes into the warm waters, I remembered that I had a hurting joint.
I had been told by tourists and the the caretakers of the hot springs that the waters alleviate sensational pain. I started massaging my painful joint and somewhat believed it would heal. Coincidentally, I did not feel the pain weeks after the massage. We left the springs at 9:30pm, and since we were all starving, we feasted on our packed snacks.

Accessing Kitagata hot springs
Located in Kitagata Town Council, south in Sheema District, the hot springs are approximately two kilometres from the trading centre.  Travellers can access Kitagata either by branching off at Ishaka Town on the Mbarara-Kasese Road or at Kagamba, on the Ntungamo-Rukungiri Road. The springs can also be accessed through Kabwohe, on Mbarara-Kasese Highway.
According to Nazario Bishanga, the Kitagata hot springs caretaker, the facility attracts hundreds of domestic and foreign tourists every week.
The springs are revered by neighbouring communities and the Ankole sub-region consider it to be sacred, with healing powers. I gathered that some people throng the site to perform some rituals.

Top tourist destination
Over the years, Kitagata hot springs have become a desired tourist destination in the western region. Everyone that visits the site marvels at nature with bubbling hot water. There are recreation centres and hotels where tourists can secure descent accommodation.
The hot springs are near national parks such as  Lake Mburo , Queen Elizabeth, Mountain Rwenzori, Bwindi impenetrable and Mgahinga. Visitors to these parks can make a stopover at Kitagata and enjoy the natural wonder.

Healing waters
According to the caretaker,  Kitagata hot springs has never registered any cases of spreading diseases or infections. People with muscle aches and skin complications have found their way to the springs.
The water from the springs is believed to have rich mineral content that has healing properties to eliminate muscular and joint pains. Some tourists carry jerrycans to take hot water back home for drinking.
The springs also provide a natural spa treatment with water’s therapeutic benefits. Here, you can lay back and relax after a long day. Residents in Sheema and Bushenyi are known for flocking the springs after work for a sensational experience.

Learning centre
The place is busy. It is a ‘hospital’ where patients admit themselves and discharge themselves after treatment.   Whether or not they recover completely from their ailments, is subject to debate.
Students from primary and secondary schools within and outside the district visit Kitagata hot springs regularly for learning purposes. According to science, hot springs occur when rainwater or groundwater is heated by magma beneath the surface of the earth.

Cracks or faults on the surface of the earth allow water to flow deeper into the mantle, where contact with hot rocks that heat water happens.
Other theories say hot springs are formed by cracks extending down towards exceedingly hot temperatures of the mantle, and water seeping downwards is heated and forced back up under pressure to bubble.

Hiking
Besides the hot springs in Kitagata, you can also visit Muhito hills. The hills stand a few kilometres away from the springs. Activities such as hiking, bicycle riding, picturesque moments of sunsets will make your tour experience worthwhile.

Hiking can also be done at Kyangyenyi hill in Bushenyi greater sub-region with an elevation of 1916 (6286ft) above the sea level. It is located in Kyangyenyi Sub-county, north of Sheema District and it  offers magical moments of rolling hills and valleys of Muzira and Ryamasa.

Around Kyangyenyi, residents  sometimes offer free guiding services and company, taking you to the summit and back. To hike Kyangyenyi hill,  you need to be mentally prepared and physically fit to avoid cardiac accidents as you trek to the summit and descend.

Inselbergs
Bwayegamba and Nyakwebundika are small hills that rise from gently sloping plains between Masheruka and Itendero, also in Sheema District.
They are located about 30 kilometres from Kitagata hot springs. These inselbergs provide a spectacular scenic view of  agricultural activities on the slopes.

Agrotourism
Communities around Sheema engage in agricultural activities that have boosted the economy within the region. The area is also known as a food basket in the Ankole sub-region. Visiting areas around Kitagata will give you a hint on how different food crops are grown.

About the traditional dishes, you cannot talk about food in Ankole and leave out Eshabwe (ghee sauce). Eshabwe is a traditional dish prepared in many parts of Ankole. It is usually prepared for guests or during special events.
It is found in towns of Kabwohe, Bushenyi, Ishaka and in hotels along the Mbarara-Kasese highway. People here eat their eshabwe with millet bread.

You are likely to see crafts and artifacts made by communities surrounding Kitagata hot springs such as ornaments, beads, earrings, décor materials, books, traditional wear and household items. These can be found on highways and craft shops where they are always displayed.

Untapped treasure
With all its potential, Kitagata hot springs are still underutilised. Negotiations aimed at transforming Kitagata into a geo-tourism centre and a major revenue earner have been ongoing,  but these efforts have not yielded any fruit.

In 2019, the Ministry of Energy and Mineral Development in partnership with a Hungarian firm, proposed to establish a health and wellness spa in  Kitagata, but not much can be seen on the ground.
According to Ian Ibara, a caretaker and one of the stakeholder of the hot springs, about 500,000 domestic and foreign tourists visits the site annually.