On Sunday July 25, 2021, I together with five friends from Bushenyi Town, went on a one-day hiking adventure to explore Kaitampungu, a rounded hill rising approximately 4803 feet (1464 metres) above sea level. It is a dreaded hill in the heart of Kalinzu, a forest reserve adjacent to Queen Elizabeth National Park and Maramagambo Forest.

There are myths about Kaitampungu hill and it is said few people in Bushenyi District make it to the summit of the mineral-rich hill. Despite stories of the hill being ruled by gods, we wanted to explore what the hill looks like and debunk those myths.

Our journey would later turn into a traumatising adventure after getting trapped in the jungle for more than 15 hours. It is an experience we shall live to remember. What started as a moment of excitement turned into a nightmare after we wandered for hours in the depths and thickets of the forest and ended up not climbing the hill.

Friends on the team were; Apollo Lee Kakonge, Carol Namara, Smart Majidu, Phionah Kyokusiima and our guide, Joseph Rubinga, an old man in his 70s.

Preparations
On a normal hiking expedition, hikers travel with essentials such as food, drinking water, waterproof gumboots, compass, maps, and a torch among others. We spent about six weeks planning for the journey. Preparations involved walking, which we did through two forest walks and after that, we thought we were prepared to go for the trip into the deep end of the forest.

We also got in contact with people who knew Kaitampungu, and sought guidance from National Forest Authority to get a guide who was familiar with the forest. At the time when wanted to travel, there was no guide. So we had to postpone to the following week, when NFA recommended as suitable guide. 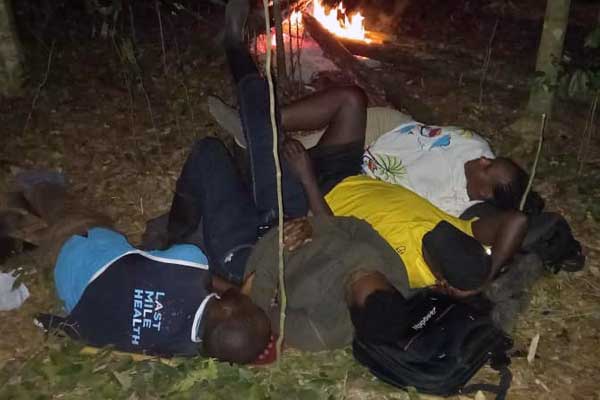 On D-Day, Carol Namara got up, said a prayer, packed a bottle of water, donned  trousers and a T-shirt and joined the team.

Setting off
By 8am, we all converged in town, where we bought simple snacks, crisps, juice, cakes, fruits and water in preparation of the journey. Moments later, we drove to Kayanga, Kyamuhunga near the Bushenyi-Rubirizi border.

At Kayanga, where NFA offices are located, we met our guide, who had been waiting for us. The NFA team advised that we put on gumboots to avoid foot injuries in the forest. One Rachael, a guide said that our sneakers would not be of great help in the forest. So, we hired gumboots at Shs5,000 for each pair and we also paid Shs10,000 as gate fee.

We boarded and drove to Kirambi, Mashonga, where we parked the vehicle. Our bags became heavy, so we decided to leave some of the items in the car. We entered the forest at 9:44am at Kirambi entry point, where we took a group photo. The weather was sunny and windy and favourable for the walk.

At the forest entrance, which is surrounded by a tea estate, we found droppings of elephants. Our guide told us that the elephants had visited that place the previous day. Although we feared that the elephants would meet us in the forest, the guide assured us they only come out of the park at night.

Topography of the forest
Inside the forest were stunningly beautiful hills of different shapes and sizes, something that you never notice when you are seeing the forest from a distance.  Animal droppings, shrubs and various tree species were some of the sights as we headed deep into the forest. Between hills and the valleys, we met dry streams. We went during the dry season and the forest doesn’t retain water.

We lost our way and failed to make it to the dreaded Mushaijamukuru hill. By 1pm, we had not reached the hill yet we were all exhausted and hungry. We had consumed much of our snacks and none of us had drinking water. Three members gave up on the journey but Kakonge and I agreed with the guide to continue searching for the treasure hill.

Lost in the jungle
Even after climbing four hills, we still could not reach Mushaijamukuru hill. We used Google maps to locate the hill but the maps indicated that we were standing on the hill yet we could not see it.

At 4pm, after failing to locate the hill, we gave up and the guide advised that we go back and pick other team members and plan on getting out of the forest, because it was getting late.  At this point, there was no clear exit.

So, we started guesswork upon which we hoped to get connected to the trails that had brought us into the forest thickets. We walked for three and a half hours, but we did not get a breakthrough. By 6:30pm, we had come to terms with the fact that our dream of locating and climbing the mythical hill had been shattered. In a V-shaped valley, we met a steep hill, which we believed was Mushaijamukuru. So, we were energised to climb on.

After reaching the top of the hill, it dawned on us that this was a different hill and the one we were looking for had shifted to another side, which was at a distance. It was already late and we decided to stay in the forest for a night. Luckily, our guide had travelled with a matchbox.

Night time
At a place where we agreed to stay was a spot where some people have previously camped and made fire. So, we collected firewood and made fire. At 7:45pm, we agreed to make distress calls to our friends, relatives and security to notify them that we had lost our way in the forest.

We started posting our photos on social media, but many didn’t take us seriously. Others made fun of us advising that we seek help from our neighbours. NFA officials advised us to make fire and keep in one place until morning, when a rescue team would be sent to pick us. They also advised that we keep our phones on and warned us against falling asleep and burning the forest.

We had nothing to protect us from the cold apart from the fire and the clothes we were wearing. We started hearing different sounds of animals in the forest. We did not fear because we had a blazing fire and with it, no animal would come close.

In the middle of the night, we joined together in singing Christian hymns. Majidu, a moslem colleague would suggest hymn titles to be sung. We sung our exhaustion out and time ran on towards morning.

At around 2am, almost everyone on the team went silent, but we encouraged each other to stay awake for our safety. Whenever firewood got finished, we would escort one another and look for more to keep the fire burning.

The team rests after finding a trail that took them to the forest. PHOTOS / ZADOCK AMANYISA

The long wait for rescue teams
It was a frightening experience getting lost in the forest. We agreed with the rescue teams to make some noise in order to make it easy for them to locate us.

By the grace of God, we saw the dawn. We were happy that we had made it through the night unharmed. We were told that different groups including the local people who are used to the forest, the NFA team which was working with Uganda Wildlife Authority and others had been sent to rescue us.

The rescue teams had cautioned us to stay in one place and wait. A member of the group suggested that we start the journey taking the eastern direction of the sun. We spent a few minutes contemplating the two pieces of advice. Then we chose to start walking because we would still walk even if we waited for the rescue teams. But we were tired and hungry.

Walking our way out
At 8am, we started walking following the direction of the sunrise, which we trusted would give us a breakthrough. From there, we walked many kilometres in thickets of the forest. Some of the phones had run out of battery but we remained with two, through which the teams in and outside the forest kept in touch.

As we walked up the hills and down the valleys, the signal and network would be on and off. This made connection with the rescue teams almost impossible but we told them that were walking to find the way.
By midday, we were still walking but we did not know where we were. We could not even fathom how much more distance we needed to cover. We were all weary and worn out.

There was no trace of water or food to eat.  At this point, we decided to sit and take some rest, but our guide did not sit. He decided to take the eastern route. Behold, after walking about 80 metres from us, he called us saying he had discovered the trail we had used while entering the forest.

Moment of relief
Although there was still a long distance to trek, this was a moment of relief. At last, we got good news that the path we had discovered would lead us out of the forest. We felt re-energised as we embarked on the journey again. Reaching the trail, we found that that is the exact place where we had sat and taken drinks the previous day.

Our hearts melted with joy as we communicated to the rescue teams that we had found the way. This was towards 1pm. We chose to rest as we waited for the rescue teams which said they were following us a few kilometres away.

Thirty minutes later, the teams finally found us. The group had carried with them bottles of mineral water and mandaazi which we shared.

Getting out
After resting for a short time, we got up and started walking again. This time, we were told we had to walk for another five kilometres to get out of the forest. At the exit point, which also serves as an entrance, friends and other people were waiting for us.

The warm welcome we received made us feel like heroes. Our friends drove us to Kirambi, where we had left our vehicle. It was still in good condition and we drove back to Bushenyi.

In town, people had different versions and accounts of our desperate endeavors at survival after getting lost in the jungle. We are looking at the possibilities of writing a book about our story in the jungle. For now, I need to recover from this near-death experience.

The deceased Orthodox Metropolitan of the Holy Metropolis of Kampala and All Uganda will be buried at St Nicholas Orthodox Cathedral, Namungoona...

Women now also account for 46 percent of regional administrative secretaries, 43 percent of judges, and 44 per cent of district commissioners

Family of man who beheaded wife ordered to pay 8 cows