Advertisement
By Michael J Ssali
More by this Author

Uganda is today the most important coffee producing country in the Commonwealth. It is the second biggest coffee producer in Africa after Ethiopia and it is the 10th world producer of the crop. Given recent efforts to increase production Uganda may soon improve its coffee volumes and attain more prestigious global production rate positions.

Numbers
Last year, 2020, we produced 5.10 million 60-kilogramme bags while the year before our production had been 4.2 million 60-kilogramme bags --- a big rise from the miserable average annual 3.3 million 60-kilogramme bags that we had been producing over so many years.
The global demand for coffee is increasing and --- according to the Uganda Coffee Development Authority (UCDA) --- it stood at 148 million 60-kilogramme bags by 2015 against 123 million bags in exports.
There is an apparent deficit of some 25 million bags that must be supplied and Uganda is one of the coffee producing countries expected to fix that deficit.
The current increase, as discussed in last Saturday’s Seeds of Gold Magazine, has been attributed to farmers planting good and high yielding coffee varieties, increased use of fertilisers, more community mobilisation towards coffee production, the link between coffee and poverty alleviation, and good field management practices, among other factors.

Disease, pests
However, particular attention must be drawn to the need for farmers to pay more attention to the pests and diseases that could impede coffee production and frustrate the national goal of exporting at least 15 million 60-kilogramme bags by 2040. Below Seeds of Gold highlights some of the major diseases and pests that farmers must beware of. 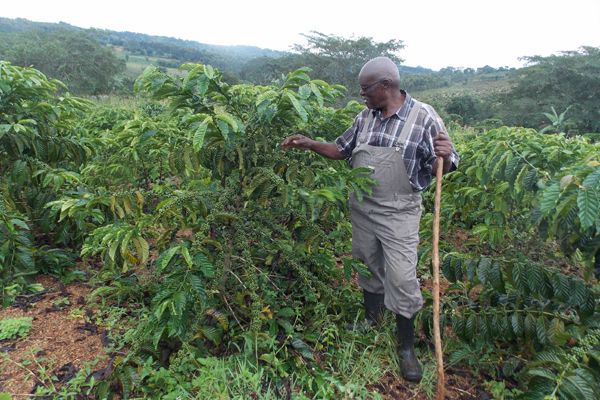 Coffee wilt disease
A few years ago, the coffee wilt disease (CWD) which had wiped out about 56 per cent of coffee trees in the country was the most threatening production problem for Robusta coffee farmers. It is still present in the country but slowly getting under control. It is a fungal disease which has no known cure and it spreads quite quickly.

It affects most Robusta coffee varieties and it poses a big risk to the farmers that mindlessly planted coffee without following proper guidance with regard to the source of planting materials. Careful farmers are now planting what are referred to as KR varieties that have some proven resistance to the dreaded CWD.
The disease manifests with wilting and dying of some leaves on one side of the coffee tree branch at first before the entire tree dries. It is said to be spread by infected tools. Many infected trees look healthy and vigorous before showing any disease symptoms.

How to control coffee wilt disease
Farmers are advised to be careful because using any sharp object such as a panga (machete) on an infected tree and going ahead to use it on a healthy one does spread the disease. Farmers are advised to disinfect the tools by perhaps dipping them into jik or some other disinfectant before using them on other coffee trees. Some wild animals and birds running or flying about in the coffee plantation are also said to spread the disease. The birds’ toe nails and beaks are sharp objects and when they land on a branch they make small scratches with the nails or with their beaks as they pick ripe berries for food and fly to another tree without disinfecting themselves.
The farmer is supposed to regularly inspect the coffee plantation looking for signs of the disease on all the trees.

Any tree noticed to bear CWD symptoms must be cut down and set on fire immediately.
The disease causing organisms are said to remain in the soil around the dead tree roots for several months.
Resistant varieties
Fortunately nowadays there are CWD resistant varieties available to farmers to plant where they have uprooted and destroyed the diseased coffee trees. The CWD resistant varieties, known as KR, can be obtained from most UCDA recommended coffee nurseries.

Black coffee twig borer
Robert Ssentamu, regional coffee extension officer in Sembabule and Bukomansimbi districts, told Seeds of Gold that the most serious Robusta coffee pest at present is the black coffee twig borer. The flying insect enters the twig by boring a tiny hole into it. This is followed by the weakening and drying of the twig which would bear coffee berries. When it enters the twig that already carries coffee berries, they also die. When the affected twig is broken at the pin-hole point where the insect passed and it is split, small black insects and white larvae can be seen inside the tunnel made by the pest. According to Ssentamu, the pest is said to exist in nearly all coffee gardens in the Robusta growing regions of Uganda.

Controlling black coffee twig borer
Ssentamu recommends frequent and regular inspection of the coffee plantation to detect rate of infection, regular weeding and burying of weeds because some weeds also host the pest and could be the source of infection. He further says the infestation tends to be worse in coffee trees under large shade trees. The new approach now is to plant fewer shade trees in the coffee plantation and to decongest their canopy by trimming some branches. All infected twigs and branches should be plucked and burnt.

Good crop nutrition has been found to be protective. Black coffee twig borer has been discovered to be much less in coffee plantations where sufficient manure and fertilisers are applied. The pest is best fought collectively by all members of the entire community. If only a few farmers in a community make efforts to fight the pest the gardens of the other farmers will continue hosting the pest and being its breeding ground all the time.
Ssentamu also prescribes some fungicides to be used as the chemical control approach. They also include those recommended by National Agricultural Research Organisation (Naro) such as Imidacroprid (Imaxi) and Tebucozole (Orius).

The coffee berry borer causes more than $500m in damages each year globally, and affects 20 million coffee producing families worldwide, making it the most costly pest affecting coffee today. According to researchers, the insects thrive in warmer temperatures, with an increase in temperatures in coffee growing areas now sparking a rapid increase in the insect.

Coffee berry borer, also known widely as Broca, is a small beetle native to Africa – though its effects are now global. It destroys crops by using the fruit as a home for its young. The female beetle burrows into the fruit and lays eggs inside.

These eggs hatch and the larvae eat the coffee seeds from the inside out. By doing this they massively reduce income for coffee producers by reducing both yield and quality. In reality, female borers actually kill coffee plants by laying their eggs in the berries. Each female can lay up to 200 eggs, and the resulting damage attracts herbivores and pathogens. 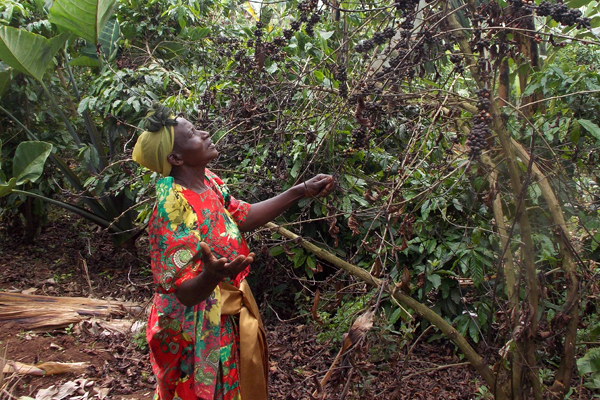 Stem borer
One of their biggest worries is the stem borer, a pest that bores into the bark and the stem itself, the larvae gaining entrance into the roots and up to a metre upwards. There are two types of stem borers --- the black stem borer and the white stem borer. They basically kill the coffee trees if not fought in time particularly those around two years old. Spraying with Cypermethrin and stem smothering often helps.

Mealy bugs
Mealy bugs, which are small sucking insects, mainly attack during the dry season and cause a white wax under the leaves and at the base of the coffee cherries.
Ants support the existence of mealy bugs by disrupting the natural enemies of the mealy bugs and spraying Chlorpyrifos on the soil around the tree helps to kill the ants. Sumithion and Carbaryl sprays can also help to fight the mealy bugs.

Termites
Termites can kill the coffee plant especially in cases where there is a lot of dead wood or dry grass on which they feed and breed. The farmer should kill the termites or completely remove the dead wood.
Coffee berry
Coffee berry disease which attacks berries at all stages of the crop from flower to ripe berry is quite dangerous. It causes the coffee beans to shrink and die. Spraying with copper best fungicides often helps.

Thrips
Though thrips attack berries, they are largely concentrated under the leaves. The leaves turn irregularly grey, with silvery patches and black spots. They then fall leaving a stunted coffee plant. Nearly half of all coffee farms in Uganda have thrips on their crops, but the pest is most prevalent in the main coffee growing zones such as Masaka, Luweero, Lwengo and Mpigi districts.

Coffee researchers don’t normally rate thrip as a major coffee pest, but following the surge in numbers in recent years they have moved to outline measures farmers can implement to control or eradicate them. Other Arabica coffee diseases include Sooty mould and Bacterial blight. Regular interaction with the area agricultural services extension officers is always strongly recommended to coffee farmers to keep their crop healthy and vigorous.