Food security and nutritional feeding are key for a healthy living.

However, some people may be privileged to acquire the required dietary food and healthy living facilities while those who lack the money may not. This include refugees who are living in settlements across the country.

The situation was worsened by Covid-19 during the first months of 2020 as government instituted lockdowns to contain the spread of the virus.

Refugees too faced health challenges as most sectors, including transport and business were suspended for months. This means some of them who had income activities were affected by the lockdown.

They could be health Centre I, II, III and IV under the government setting which takes care of both host communities and the refugees of any ailments which is manageable but in case it is an acute challenge, then the patient is referred to the nearest referral hospital for further attention.

Dr Adriko contends that in most cases, the health challenges the refugee children suffer from are related to nutritional needs, especially for children under the age of five who are not tended to very well by their mothers. Lactating mothers too sometimes suffer the same challenges but usually out of negligence.

Other challenges most refugees and host communities suffer from include malaria since the settlement is close to River Nile which habours mosquitoes.

Others are upper respiratory tract infections which lead to flue and cough but diseases such as diarrhea are reducing due to hand wash practices that were introduced as part of Covid-19 infection management.

In a week children received at the health centre with malnutrition challenges in Rhino Camp which is similar to other settlements in West Nile range between 4 to 5 in most health centres but those who suffer malaria is at 60%.

Dr Adriko and team in most cases engage the affected families in counselling sessions where parents are sensitized on balanced dietary practices especially for the children and lactating mothers.

“The common crops grown in West Nile are millet, sorghum, simsim, beans, orange fleshed sweet potato and various nutritious green vegetables such as jute mallow, cabbages and cow pea among others. The refugees are equally growing these crops which contain food nutrients such as Iron, Zinc, Calcium, Protein, Vitamin A and carbohydrates among others. We encourage families to consume these foods. Besides WFP and other partners distributes families faced with food shortage challenges for the children supplementary powder food which are good for porridge comprising of a mix of soy flour, millet, milk for rehabilitation of malnourished children,” he notes.

Patients who are suffering from other diseases are accorded the required treatment and families are encouraged to use mosquito nets which are distributed in all homesteads.

The Social Distance Operating Procedures for Covod-19 generally has reduced some of the avoidable health infections because people are alert.

However in case a patient is in a critical status, such a patient is referred to Arua referral hospital for the case of West Nile refugee settlements

Omot Dixon is the in charge of Panyandol Health centre III at Kiryadongo refugee settlement and explaining the health status to Daily monitor while on his desk notes that, the nutrition challenges are the same just like in other refugee settlements in the country.

The malnutrition challenges in children according to him is more of a problem in host communities because they have enough land and are engaged in agricultural initiatives the whole day forgetting to concentrate in cooking and feeding their children with dietary food.

However in general in a week the health centre registers about 3 children who are malnourished some of who are brought for health attention when the situation is acute with skin cracks.

In most cases such children are admitted in the ward but those with minor signs the parents are asked to manage from home. 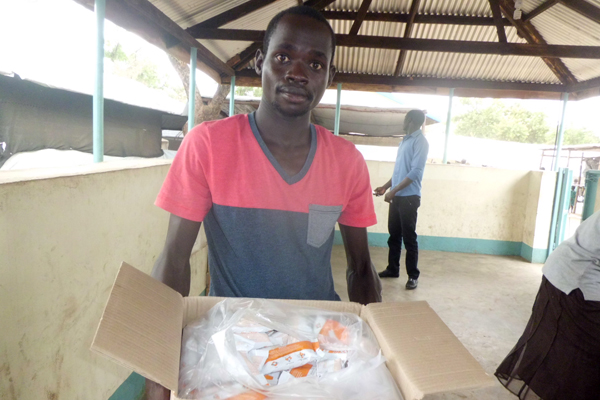 “The health challenges are administered in two ways, one being facility based and this is where the patients come to us and we administer medication and food supplement services directly. If the situation is not severe, parents are asked to administer the medication and diet from home. They come and report back on periodical basis. The second intervention is community based. This is where we make appointments to reach out to communities and sensitize them as well as provide them health service and food supplements at household level. In most cases we demonstrate how balanced diet food must be prepared because we cook the food and give them to consume so that they can go back and prepare the same in their homes,”

The health centre according to Omot acquired land where demonstration farm is set for growing fortified crops rich in Iron, Vitamin A, zinc, sulphur, protein and carbohydrates among others.

Experts from Ministry of agriculture through the demonstration gardens sensitize the refugees and host communities about best practices of growing these crops on the smallest piece of land available as dietary measure.

WFP under the programme provide action against hunger does distribute porridge flour and powder milk for pregnant women who come to the health cemtre for Antenatal service in a bid to boost their immunity and health status. This is to address normal birth of their babies without much complications.

The same service is given to them at least for two years when they are feeding their babies with breast milk.

In the event that malnourished children or adults suffer from other diseases, the medical team will administer the treatment according to the prescription.

“Usually once the health team identifies the type of sickness, whether acute malnourished condition which may cause cough, flue and cracking of skin, then we prescribe ant biotics that can treat dehydration. The drugs are usually released by the National Drug Authority upon purchase from manufacturing countries by UNHCR. Since the volume of incoming patients is so high, we are operating at the level of a Hospital,” Omot added.

He noted that in a month his team delivers between 200-250 mothersin and the centre receives between 300- 400 patients with various sicknesses a day.

The centre has 15 government workers and partners have tried to recruit about 20% to supplement but the centre is under staffed.

This challenge according to Omot is faced in most health centres in refugee settlements as well as other government hospitals including those in Kampala.

For the case of urban refugees living in Kampala, they receive the nutrition and health services in the nearest health centres and hospitals where they are attached to.