Yes, trees are beautiful and offer shade and fruits but before you plant them, it is important to know which type of trees and how many trees your compound can accommodate to avoid disaster, Lydia Ainomugisha writes.

Advertisement
By Lydia Ainomugisha
More by this Author

When Grace Nabachwa completed the house on her 50 by 100 piece of land in Sonde, Namugongo,  Wakiso District, she immediately planted fruit trees.
“I planted two mango trees, two avocado trees, some oranges and two jackfruit trees,” she says.

In the beginning, these seemed okay and she had a lot of shade all over her home but soon, she felt it was too crowded and decided to eliminate some of the trees.

But her partner disagreed with this and proposed that should atleast first taste the fruits from all the trees and retain those with the tastier fruits. This would take a long time which kept them in a mini-forest of sorts.

“I might have to cut everything and replant because some of the trees seem too tall while others do not have the best fruits. I was recently forced to cut my guava tree because its fruits rot before ripening,” she says.

Nabachwa’s story is a typical example of many people who rush and plant all sorts of trees as soon as they buy their plots of land. The thought that you will be able to harvest all types of fruits drives one to plant everything so that they enjoy the harvest.  But little do they realise that too many of these trees could become an inconvenience. 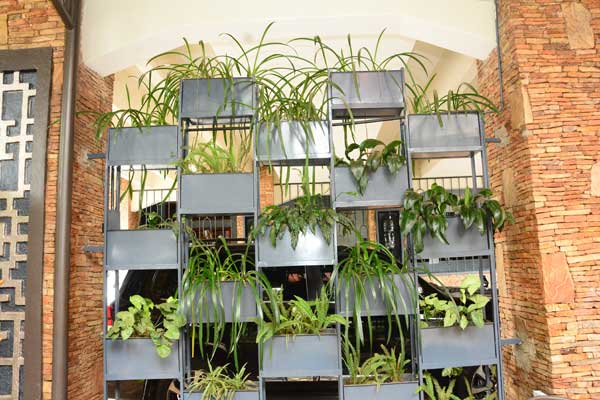 You can grow some plants on the wall or in hanging baskets.

Just like Nabachwa, Joshua Okonya, a resident of Gayaza, admits giving into the temptation to plant all the trees he desired when he moved into his home 11 years ago. He desired to have a variety of fruits just his childhood home but did not realise that the land at home was much bigger.

“I planted almost all fruits including mangoes, jackfruit, avocados and some non-functional trees such as palms and pines,” he narrates.

As if planting these trees was not bad enough, he also let some trees grow on their own. These were from the fruits they ate and threw in the compound.

A congested compound and big tap roots
At first, Okonya says the scenery was beautiful because the trees provided shade and the children even used the strong ones for swings.

But soon, he began to feel that his compound was congested. But because they were yet to give him fruits, he decided to wait a bit longer and taste their fruits first.

“The waiting seemed forever and uncomfortable because the roots from the trees were failing the vegetables and matooke from growing well,” he says.

Also, Okonya says with time, the compound lost its beauty as the trees had not  been planted in an orderly manner making it look disorganised.

He eventually made the tough decision to cut most of the trees, leaving just a few and replanting some as advised by an expert.

He could not keep most of the plant varieties because most of them were not fit for a home on a small piece of land.

The right type of trees to plant
Simon Singa, a landscape designer advises people with moderate pieces of land to plant just a few trees on their compounds and to follow a certain theme so that their spaces  are not disorganised and unkempt.

He cites the Italian and English themes of tree planting and advises home owners to work with an expert to choose the theme that suits their personality and tastes.

For a beautiful compound that is not congested but is still green, he advises that you plant a mixture of ground covers and shrubs because these do not usually grow very tall.

Ground covers can be defined as low-growing plants that spread quickly to form a dense cover while shrubs are woody plants which are smaller than a tree and have several main stems arising at or near the ground.

He further reminds home  owners  not to only plant trees for themselves but to think about  your neighbours too.
Therefore, be careful not to block their view but rather let your trees be visible enough to pass on the good vibes. He cites an example of the good feeling you get when driving through Naguru and Kololo. Make sure your trees benefit your community too.

Blend functional and non-functional trees
There has been a popular belief that small land owners should only plant functional trees but Singa disagrees. He advises that you have a blend of ornamental trees, fruits and herbs and spices.

“You need to balance the trees because looking at green is therapy and reduces stress and depression,” he says.
For a 50 by 100, he advises that you plant four phoenix palms and fruit trees such as tangerine, a grafted mango in an L-form from the gate.
In the backyard, Singa advises that you plant herbal plants and spices such as mint and lemon grass.

“This helps you to keep organised and allows you access to pick the herbs while cooking with ease,” he says.

Utilise hanging baskets or hook on the wall
He also says that you can plant some berries on the wall or in hanging baskets. Singa says strawberries are best-suited for  hanging baskets because this not only keeps them safely away from slugs, snails, and small animals which enjoy the fruits as much as we do but also helps you to save space.

To do this, find a bucket or sturdy flowerpot that is big enough to hold the hanging basket. This will keep it steady and up off the ground while you work on it.

You can also hook some plants on the wall. To do this, select a hanging planter with a hook, strap, or hanging ring. As long as your plant’s container has a hook, strap, rope, or ring to hang it, you can hang it on your wall.

“The lighter the container is, the easier it will be to hang from your wall, so try to avoid hanging planters made out of thick, heavy materials,” he advises.
Seek professional advice while doing this so that you do not damage your wall in the process.

Therefore, much as trees contribute to our  environment by providing oxygen, improving air quality, providing shade in homes, not all trees are right for your compound. Seek proffessional advice when in doubt because a wrong decision can turn out to be costly.