Advertisement
By Gabriel Buule
More by this Author

Death is normal but losing a loved one during a pandemic is one of the most painful experiences in a lifetime.
With the abnormal burials, death announcements that seem too many to count, many are left in grief without according their loved ones proper send-offs.
My father Michael Archangel Bwete, is among the many souls who have succumbed to Covid-19 as the country grapples with a ruthless second wave of the pandemic.

It has taken me more than a month to compose myself and eulogise Mzee Bwete as we fondly called him, a great educationist, a senior citizen.
Born in 1937, the 84 year-old retired civil servant breathed his last in an ambulance, just a few metres to the entrance of Kisubi Hospital, where he was due to get oxygen.

The last lap
Mzee Bwete had for years battled diabetes and high blood pressure,  conditions that had been contained by the intensive medical attention he always recieved.
He would visit hospitals for periodical check-ups and treatment as prescribed by his daughter Dr Justine Nnakate Bukenya, who always kept a keen eye on his condition.
But a few days into June, his condition worsened and following a series of medical check-ups by medics from Mpigi Health Centre IV, he was subjected to Intravenous (I.V) treatment after it was realised that his sugar levels had risen.
With medical facilities overwhelmed, Mzee was attended to by his daughters, also nurses Catherine Nanfuma and Franchesca Nansasi at his home in Bwanda in Mpigi.
When the condition went out of hand, he tested positive for Covid-19.

On the morning of June 15, Dr Justine Nakate (Nakaye) and other siblings evacuated him to Rubaga Hospital, where he arrived  towards mid-day.
I joined the family in the desperate search for the next move. Laying on a bed in an ambulance, he was struggling breathe and sweating profusely as we waited for guidance from a doctor.
Minutes later, a nurse showed up to measure his blood pressure and she took results to a doctor who later advised that all dad needed was oxygen.
Sadly, the doctor told us that all oxygen beds were occupied.

Hunt for oxygen
The doctor made several phone calls asking around if we could find a bed in Kampala in vain as all the beds elsewhere were full.
Friends and siblings joined the quest for a hospital with oxygen but all efforts remained fruitless.
I entered the ambulance and saw Mzee looking so helpless and desperately fighting for his life. “Prayer is our only hope,” my sister Betty Nakawunde said to me worried and disheartened.
I called a friend and as expected, she helped secure a bed at the Cancer Institute after talking to doctors. However, there was a condition; the patient was not supposed to have Covid-19.
I looked at my siblings who helplessly kept trying to find a way out. Our mother sadly looked at us waiting to see if we could find a solution.

Later, Nansasi, our sister informed us through the phone that there was oxygen at Nkozi Hospital. But on condition we had to book the slot with Shs1.6 m.
Nanfuma advised that we could make more phone calls around because driving around 78.3km to Nkozi from Rubaga would be risky and would could take us hours. The battle to save Mzee was a desperate race against time.
Towards lunch time, a glimmer of hope flashed as Dr Nnakate, our sister called to inform us that she had secured oxygen at Kisubi Hospital, 22.2km from Rubaga, much nearer compared to Nkozi.

Via the Express Way we reached Kisubi Hospital in minutes. But slightly later than the grim reaper.
On our way, the mood inside the ambulance was sombre. In the front seat Mzee’s shamba boy kept conversing with the driver. At the back, my sister Nanfuma and my mother Harriet Nalwanga, were visibly lost in thoughts.
We couldn’t take the eyes off Mzee, his fingers kept clasping as his legs moved lifelessly. I looked at the empty slots inside the ambulance that are mean to be fixed with oxygen lines.

He was continuously sweating, something that had given us just little hope.
As we dared the murrum road to the hospital, I had seen him breathe his last, I tried to stomach the pain in disbelief because I hoped it would be better if his death would be announced in a medical facility.
“Naye mulowooza akyassa”? (Do you think he is still breathing? My sister Nanfuma asked in a quivering voice.
My mother sadly looked at us as she arranged Mzee legs and closed his eyes as we drove to hospital with barely any hope left. 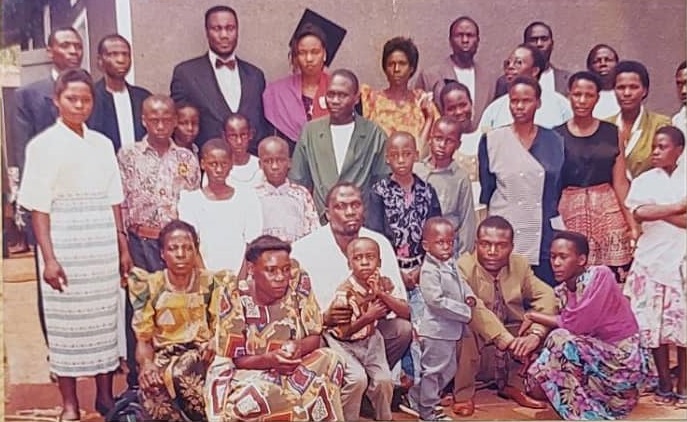 “You have delayed!”, a doctor who checked his pulse at the hospital compound told us.
Mzee’s next destination was a morgue not a ward; his next home, a grave, not any of his houses.

Leader
My father was a human with distinct approach, he would speak with facial expression, and never shouted at anyone.
Prior to his death, his sub clan head (Ow’Essiga) had bestowed him with responsibility to assume leadership of Ow’omutuba, the third highest title in Buganda cultural clan hierarchy, which made him the first titular leader of Essiga lya Bwete e Busomba under his grandfather Ssenfuma Ssemukunyi of Kanyike, who reports directly to clan head Ggabunga the leader of the Mamba clan.

From dust you came
At St. Gonzaga Catholic Church in Bubezi, a priest, family and friends gathered not just to grieve but to thank God for the life of a senior citizen who loved helping and elevating others.
He was laid to rest at Bukunyi village in Busomba zone on June 17.
Michael Bwete will be greatly missed.
Memories
Growing up in the 90s, dad would always reminded us: “Atakola talya” (If you don’t work, you don’t eat), Okusoma ye kitaawo era ye nnyoko,”( education is father and mother).
Those statements always encouraged us to study and work hard. On several occasions, he recounted his childhood, where he worked at a clay mine in Bulereje to get school fees.
His struggle to see an educated society was never fruitless. A life-time board member of several schools, Mzee championed infrastructural development in several schools.

In 1998, his daughter Dr Justine Nakaye (Nakate) Bukenya secured a university degree in medicine, presumably the first girl to do so in Kyaali Sub-Parish in Mpigi District.
Celebrating higher education graduation had become a norm to him that months to his death, another one of his children had got a PhD.
From fathering religious leaders, teachers, engineers, bankers and a journalist, Mzee made sure that he bestows all his children with a higher education certificate.
Burial

His favourite song “Katonda Yebale” brewed tears of joy from his children and friends as the priests accorded him the last mass. Michael Bwete will be greatly missed. His community has him (in part) to thank for the success of Kyaali Sub-Parish where he served as a LC III Councillor, Member of Catholic Church, Obwakabaka bwa Buganda and a couple of schools including Bujjo Memorial, St Mary’s and St. Martin  Jjanya.  My father will always remind me of the grit and determination one needs to be a leader, parent and social ladder no matter what it takes.

The Office of the Leader of Government Business in Parliament and that of the Chief Whip work hand-in-hand to process government’s legislative...