Advertisement
By KARI MUTU
More by this Author

For many years I have avoided a road-trip to the Masai Mara because of the awful state of the road. But the recently paved section between Narok town and Sekenani gate makes for an easy six-hour drive from Nairobi. This time round I stayed at the Fairmont Mara Safari Club in the private Ol-Choro Oiroua Conservation Area.

We arrived in time for lunch, at a newly refurbished and reopened hotel. Situated on the banks of the Mara River the property was damaged after heavy rains in 2020 flooded the river which then overflowed.
I like the bright, airy feel of the remodelled lobby, the skylight ceilings and stone fireplace. Strings of brass cut-outs adorn the light fixtures and hang over the curved bar crafted from pale yellow stones. As a lover of African cultural objects, naturally I admired the tall carved ceremonial seats, wooden masks and animal stone sculptures.

A culturally-inspired modern design describes the guestrooms, with bedspreads of Maasai shukas, natural stone bathrooms and beaded portiere curtains separating the bed and bath areas. As expected for a Fairmont, all amenities were available including slippers, bathrobes, toiletries and washcloths. 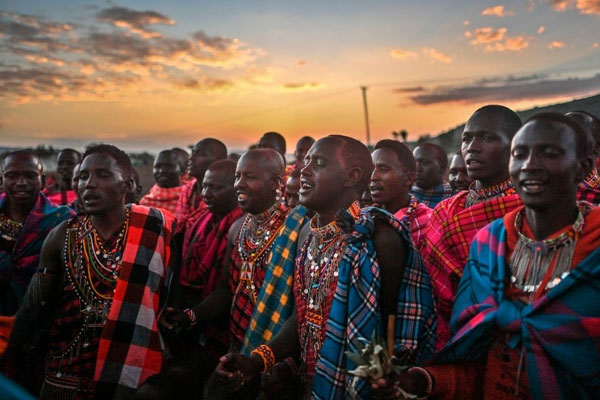 Lunch was on the dining room veranda along the river, partly shaded by a big fig tree. We took a late afternoon game drive and spotted plenty of elephants, zebra, giraffes, hyenas and antelopes. No wonder Mara is an animal paradise and a photographer’s Eden. Halfway up a hillside we arrived at a blazing campfire in an open space where the Fairmont staff had laid out savoury bites and sundowner drinks.
Even though the sky was overcast, the elevated position still gave a marvellous view of the endless plains below.

After a hot shower that evening, we settled into a leisurely dinner at the hotel followed fireside conversations. Some people are unsettled by the unusual night noises and animal sounds you hear on safari but I really enjoy nature’s nocturnal chorus. A bush breakfast was arranged by a bend in the river, the morning sun pouring over the treetops on the opposite bank. We opted for an extended game drive in the main park and saw a lone cheetah next to a fresh kill. Cheetahs usually eat right away, because they are vulnerable to attacks by bigger predators. This particular cheetah kept sitting up and looking around warily.

It has been years since I visited the Mara during the wildebeest migration because the park and hotels are usually overcrowded and it is the most expensive time to visit. Since tourism has not fully returned, it was a pleasure witnessing the wildebeest herds and Mara’s other treasures without excessive vehicular traffic. I counted under ten cars at one of the crossing points on the Mara River.

Sadly, some bad safari behaviour continues. While watching a family of lions from a respectable distance, an open-sided lodge vehicle went off road and straight up to the animals. Not only did they block the view for all other visitors, the startled lions immediately jumped up in agitation and moved off deeper into the bushes.
A pit-stop at Lookout Hill later was a chance to stretch our legs and take in the vista.

Big blue skies and sweeping grassland dotted with dark green trees that also traced the flow of the Mara River.
In the afternoons, the peaceful and quite ambience on the river-facing deck was just right for lounging at the hotel, unless one preferred a nap or a dip in the swimming pool. Every so often the resident hippos trumpet and bellow before crashing back into the water. There is a least a 20-foot drop to the water level and the valley is just as wide, so it is hard to believe the river was completely full and overflowing last year.

A full moon appeared on our last night during a bush dinner served at a grove of trees. A troupe of dancers in traditional Maasai garb entertained us, the usual diversion in safari camps.
There was something magical, almost mystical, about listening to the deep-throated songs as the men danced in fluid body movements and high leaps around a blazing fire. Supper was a buffet selection with a full open bar of beverages, so needless to say the evening was relaxed and cheerful.

Armed with placards encrypted with words slamming Ms Amongi, dozens of women asked President Museveni to intervene in the long-standing...

Why govt is delaying to dispatch J&J jabs