In his last position, Edgar Buhanga served as the deputy director in charge of planning, monitoring and research. In that capacity, he oversaw the system of protected areas, research and monitoring of animal species both inside and outside protected areas, veterinary services to ensure wildlife is healthy as well as restocking from one area to another.

On October 20, 2020 he retired. A father of five and teetotaler, Buhanga’s initial connection with tourism and travel was in 1989. Public service advertised jobs and he applied. In January 1990, he was hired as a game biologist and researcher at the current Uganda Wildlife Education and Conservation Centre, also known as Entebbe Zoo.

Before graduating as a scientist with speciality in botany and zoology, they went for practical lessons at Mweya in Kasese District. Part of their lessons included hydrobiology; water sampling, looking at the different fish from different landing sites but this was not exciting and he was drawn to wildlife. After school, there were options in Kawanda and he settled for wildlife biologist. 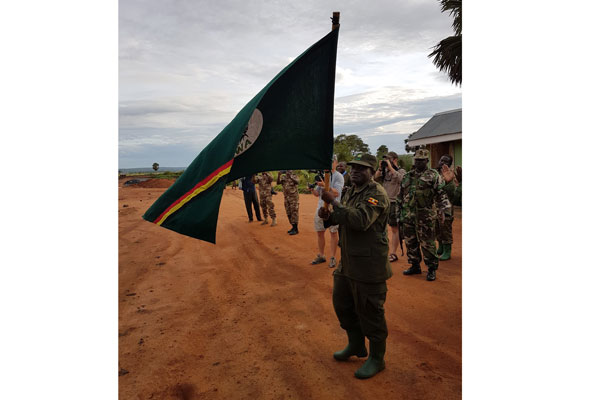 In service. Flagging off Uganda Kobs from Murchison Fall National Park before being translocated to Kidepo Valley National Park in June 2017.

“Those days, we travelled on a tipper truck to reserves and national parks. It was five of us but couldn’t fit in the front cabin. What an experience!” he recalls.

He was recalled to the headquarters in Entebbe from where he was posted to Kibale National Park to do monitoring work to follow up on trends.

While there, an opportunity arose for a Master of Science in zoology with a bias in wildlife management at Makerere University. He took it up and graduated in 1996. His research was on elephants. He wanted to find out if Kibale would be an elephant-induced forest climax. He was redeployed to the headquarters. Discussions had started on restricting the wildlife sector because on one hand were national parks looking after wildlife in there, while the game department looked after wildlife outside national parks.

Government felt both were doing the same work in different places and challenges for the game department which was getting funding directly from treasury whereas national parks were semi-autonomous and doing better so the government rationalised it.

“I was involved in workshops in which we would brainstorm ideas that gave birth to Uganda Wildlife Authority (UWA) in 1996. I was privileged to be part of the team that did the protected area review and established the estate in terms of encroachment, wildlife, and livestock living in park,” the seasoned tourism player narrates.

Buhanga applied for the advertised jobs in UWA and joined as a monitoring officer.

In his portfolio, he contributed to creation of new reserves through a process of getting government to gazette areas where some 65, 000 people lived.

“Game department didn’t have such capacity as national parks. They had offices in towns. The man managing Tooro Semliki Reserve was based in Fort Portal. He didn’t have a vehicle to move to the ground and supervise. People entered because there were no boundaries on reserves,” Buhanga recounts.

New protected areas’ boundaries were drawn. At the time UWA was still depending on donors and did not have money to sustain him. He joined Care International in Uganda as an environment advisor which was incidentally supporting UWA on conservation-related programmes. His contract expired as UWA received funding from World Bank  to implement demarcation of national park and reserve boundaries, and he was called back to spearhead the programme in 2002. In 2006, he was moved to become the authority’s planning coordinator. In 2015, he was promoted to the last position he has held.

Looking back at his career, the 60-year-old, says acquiring land for conservation was no mean feat and he is proud to have been part of the team that negotiated and brought more land under conservation.

“When UWA was formed, we had an estimate of 1, 500 elephants and we have about 6, 000. In general, the wildlife populations have grown,” he explains.

Under his leadership, he achieved quite some feats.

“When I took over the planning role, the institution was earning Shs13b. In 2018, we had Shs120b. The planning sets the pace for the institution. I have heard that UWA is one of the best run institutions in the country. I am proud to have been part of the team that has made UWA grow,” he further observes.

Buhanga plans to live a private life in retirement.

“I have played my role for 31 years in service. Friends have advised me to start a consultancy firm given my experience but then I would not have retired because consultancy is more demanding. However, if a friend has a consultancy firm and I can share knowledge and avail my services,” he discloses.

Buhanga is going to set up a maize processing and packing cottage factory. He advises those in service to start planning for retirement on the day you get a job.

“I started by investing in rentals where I was assured of school fees to support my children’s education. I always asked myself about my life after work. The beauty about working with UWA, is you have four-year contracts and every end of contract, you are paid your gratuity. Every four years, I would get some sizable money and invest it,” he reveals.

With his retirement pretty much worked out, Buhanga  has time to revisit some of his favourite local tourism destinations. Top on the list is Murchison Falls National Park to which he is endeared to thanks to its northern back landscape and mighty falls. Kidepo is his second best for its wilderness.

January 1996: Master of Science (Zoology with a bias in wildlife management), Makerere University.