Having taught for 32 years Ernest Bwambale retired into farming and real estate in 2015.

He started teaching at Kasese Primary School after completing his A-Level. In 1981, he went to pursue a diploma in Education at National Teacher’s College in Kyambogo.

His first posting after completing his diploma was at Nyakasura School in Fort Portal, Kabarole District in 1983 where he taught Chemistry and Biology up to 1991.

“Before I completed my course at NTC-Kyambogo, many schools including Bwera Secondary School and Rwenzori High, approached me and offered me jobs because at that time teachers were selling like hot cake and it was easy to land a job,” Bwambale recalls.

But Bwambale chose Nyakasura because one of their directors at NTC-Kyambogo; Jonathan Rusoke  was transferred there as head teacher.  In 1991, he requested study leave and went for a Bachelor’s Degree in Education which he completed in 1993. 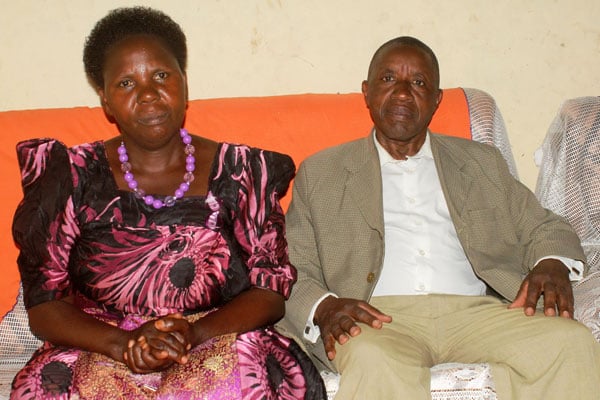 Family man. The retiree with his wife at home.

During his holidays he taught at Rwenzori High in the Kasese District  and he was later posted as acting deputy head teacher  to the same school up to 1997. He was again transferred to Nyakasura School for one year and in 1998, he was transferred to Karugutu Secondary School in Bundibugyo District, now in Ntoroko District as a head teacher up to 2009. He retired in 2015 while teaching at Ruteete SS in Kabarole.

Strategising for retirement
Bwambale says his preparation for retirement started when he was posted to Nyakasura School. He says at the time, he was paid a paltry Shs3,591 per month. To make ends meet, he engaged in subsistence farming. This move would help to raise more money for future investments, especially buying land.

“I grew matooke, tomatoes and beans which I sold to staff members. I would wake up at 5am, go to the garden for two-and-a-half hours before preparing for classes. I would then return to the garden after classes in the evening,” Bwambale recounts.

He says he also raised more money from a school canteen which he had started with his colleagues at Nyakasura School, where he was the purchasing officer. The retired teacher also taught part-time in other secondary schools such as Kahinju, Kaboyo and Maranatha which earned him an extra Shs4,500.

During President Obote regime in 1984, he recalls, his salary was increased to Shs14,000. He had saved 180,000 by 1991. He used his savings to acquire a piece of land in Kasese District at Bugoye Sub-county valued at Shs300,000 and paid off the rest in installments. Savings from selling produce at the school enabled him buy a bicycle at Shs42,000 which helped him to join a side business of buying and selling produce.

“After buying the land, I planted matooke and in 1995, I was married and had three children. Then, my wife advised me to start a restaurant near the school (Rwenzori High) and we started cooking for 30 students. I would earn Shs750,000 per term and I used the money to buy another plot of land and build a rental house,” he says.

When he was transferred to Karungutu Secondary School in 1998, he carried on with farming because the soils were fertile and his salary had been increased to Shs450,000. Bwambale used his savings and salary to buy pieces of land in the area.

“While at Karugutu Secondary School, one of my friends advised me to start cattle keeping. I used part of my salary to buy cattle from Rwebisengo, each at Shs50,000 and because I was a farmer there was batter trade between cattle keepers and farmers, I gave them food and they gave cows,” Bwambale says.

Blessed with 10 children, cattle keeping at that time earned him some money, which he used to pay tuition and he also set up a stationery shop.  Before retirement, he says he had started building some rental houses in Karugutu, Kasese and large scale farming from which he still earns.

Investment
The teacher-turned farmer currently has 3.5 acres of land for cultivation in Karugutu, two plots of land fully developed with rental houses and the other three plots he plans to develop in future.  Bwambale says he used part of his pension to buy more land at Shs5.5m and a motorcycle to ease his daily movement.

Typical day
The 66-year-old says he wakes up at 7am before going to his garden or to supervise his workers at the construction site in Karugutu Town.  Besides that, Bwambale also has other responsibilities as a member of the district service commission of Ntoroko District,chairman Karugutu SACCO and vice chairman Karugutu North.

Two cents
Bwambale says people ought to know that life after work calls for proper planning and that those still earning salary need to be frugal.

“People these days earn a lot of money, but some of them spend it on luxury such as expensive cars which do not generate profits. Young people should know that the future is expensive and plan for it accordingly,” Bwambale urges.

“Also do not copy and paste other people’s investments but think of investment you are sure will generate returns in future.”