Advertisement
By GILBERT MWIJUKE
More by this Author

Once upon a time, Mbale was a model of infrastructural development, economic progress, cleanness and orderliness.

With the 4,321-metre high Mount Elgon volcano brooding in the background, it was a town that inspired calm and civility – so much that in the 1960s President Milton Obote had resolved to relocate Uganda’s capital city from Kampala to Mbale.

In fact, by 1970, Obote had laid the foundation stone for the president’s office block at Mount Elgon’s Wanale peak, which offers scintillating views of eastern Uganda’s biggest metropolis and the vast plain beyond.

Being the largest and most populous city in Uganda, chaotic Kampala would remain the country’s business capital while calm and orderly Mbale would be the seat of the government. Just like Lagos and Abuja in Nigeria.

That was Obote’s plan. But things fell apart in 1971 when Idi Amin led a coup d’état that sent Obote packing and the illiterate and mischievous army commander installed himself as president of Uganda.

Some accounts say that Amin presided over the most authoritarian and inefficient government in the history of independent Uganda, which led to the unfortunate downward spiral of almost all sectors of the country’s economy and left most urban centres in tatters.

But while most Ugandan towns rebounded and registered remarkable progress after the end of Idi Amin’s tumultuous years, Mbale, on the other hand, stagnated – and even continued with the downward spiral in many aspects – for decades. 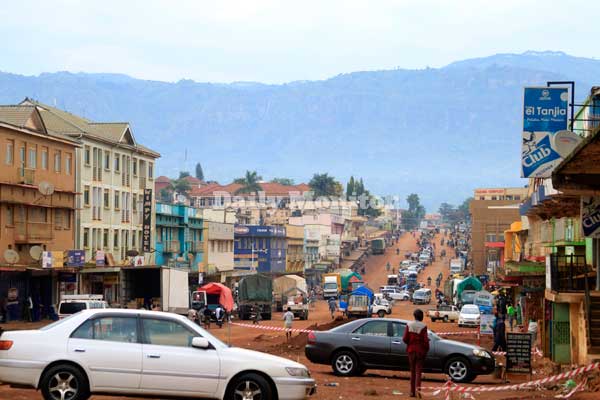 This was perhaps because the area was President Museveni’s predecessor Milton Obote’s stronghold, and not so many government programmes targeted opposition strongholds.

Today, Mbale’s skyline is still dominated by pre-colonial buildings of Indian architecture – some of them even still incomplete several decades later – while many streets spot dilapidated roads that have not been maintained for decades.

The only street with a road that is still unscathed – still representative of the good old Mbale that almost became Uganda’s capital city – is the Republican Street. It’s not surprising that all corporate companies worth their salt have offices on this street: banks, insurers, telecoms – and even Nation Media Group’s eastern Uganda bureau.

Mbale gets city status
Since last year when Mbale and nine other Ugandan towns were upgraded from municipality to city status, things are slowly changing for the new Mbale City and it looks set to regain its old glory.

Like most developing cities, Mbale City administration has kick-started the city’s revival by reworking all dilapidated roads. Today, the city looks like one big construction site, with most corners awash with local construction company Dott Services’ “Road Under Construction” signposts.

The roads
“The city roads are in bad condition because they were constructed way back in 1964. Improving the road network, sewerage systems and street lighting is one of our main priorities,” said James Kutosi, the public relations officer of Mbale City Council.

Away from the roads, there are several new shopping malls that are currently under development in the city centre, but the biggest construction project in Mbale today is the 619-acre Sino-Uganda Industrial Park on which the city is betting its economic revival.

The new industrial park currently employs about 5,000 people and is expected to employ more than 200,000 when it begins to operate at full capacity.

Tourism gets shot in the arm
Now savvy hospitality entrepreneurs are rushing to cash in on the anticipated economic boom with a spate of new hotels, apartments and guesthouses.

The most prominent hotel project is the 5-star facility that is being constructed at the very spot where President Obote wanted to build his president’s office, but there are several other high-end hotels and guest houses under construction around the city.

“Mbale City currently has only about 500 hotel rooms but our target is to have at least 1,000 decent rooms,” Mr Kutosi said.

“We are planning to have several monuments around the city depicting the Imbalu culture,” he said. Imbalu is a biannual traditional circumcision ceremony among the Bagisu people that marks the initiation of boys into manhood. The ceremony attracts scores of tourists to Mbale whenever it’s held.

About...
Mbale is a city in the Eastern Region of Uganda. It is the main municipal, and commercial center of Mbale District and the surrounding sub-region. Mbale is 225 kilometres (140 mi), by road, northeast of Kampala, Uganda’s capital and oldest city, on an all weather tarmac highway.