Advertisement
By Isaac Ssejjombwe
More by this Author

On Wednesday November 18, pictures circulated on social media, of a woman in a helmet and press jacket, tightly holding a sobbing woman in one photo and in another, carrying a lifeless boy on a boda boda.

The press woman, herself a mother of two, is a journalist at Spark TV, a member of the Nation Media Group. She responded to a shooting incident involving a mother and her 15-year-old son.

“I had never covered riots before, so the previous day (Tuesday), my producer had asked the cameraman to cover the riots but everyone in the newsroom was scared to go to the field because of what we had seen but I decided to go. The first day was okay but the scenes on Wednesday are still distressing,” narrates Nakibuule.

She says she reached office early in the morning and dressed up in body armor with a helmet. The team got into the NTV car and hit the road covering riots around Kampala City.

“It was a volatile situation everywhere. Police vehicles were here and there and civilians were seen chanting, shouting and engaging the police in running battles,” she recounts.

The journalists then decided to get people’s voices in Owino but when police saw them, they started chasing after them. She, therefore, instructed the driver to drive to a police station and perhaps then, those chasing them would give up.

She also asked the cameraman to keep filming because they needed to have the footage which would be used as evidence and mainly because it was their only weapon, but before they reached Kafumbe Mukasa roundabout that goes to Katwe and back into town, she saw a woman seated in the middle of the road, crying.

“Because she was wearing a dress, the first thing that I thought about was that she would, in the process, end up undressing and that would be shameful. I did not know what was happening but I just jumped out of the car without the driver even noticing. I met her and held her legs but she kept wailing, ‘Amos! Amos!’ I asked her who Amos was and she said he was her son. She pointed across the road where a young boy was lying helplessly by the roadside. Amos had been shot,” Nakibuule recollects.

Nakibuule swung into action, asked her cameraman to help her carry the woman to the side of the road and when she had been moved to safety, Nakibuule rushed to see what was happening with the young boy. “He had a big hole in one cheek and was bleeding terribly, surrounded by astonished people,” she shares.

She ran to the nearby police station where she asked a policeman whether they could get an ambulance or police van. The policeman said they were sending an ambulance shortly but after five minutes with no ambulance in sight, she took matters into her own hands.

“I called a boda boda rider whom I later got to know as Kamanzi, a milk delivery man, sat on his bike and pleaded with the policeman to hand me Amos. Meanwhile, we were engulfed in teargas. I held the boy and I remember calling his name and telling him to fight but he was not responding and when I switched to Luganda and told him, ‘Amos fight hard to spare your mother further pain’,  that is when he tried to open his eyes,” recounts Nakibuule with tears rolling down her eyes.

Nakibuule asked the bystanders where the nearest hospital was. They directed her to Doctors Clinic in Kisenyi. On arrival at the clinic, the journalist, with the help of some Good Samaritans, carried the young boy in and the medical team administered First Aid. She says, en route to the health facility, she could feel the boy’s pulse on the hand. When she left the hospital, the health workers were going to put the boy on oxygen.

Learning of the passing of Amos

Nakibuule put up a post on her social media account, calling upon anyone who knew Amos to find him at Doctor’s Clinic. In her rush to help she had not got the mother’s name or Amos’ surname but relied so much on the pictures that were taken of her with the mother and the child.

She woke up at 5am the following day (Thursday November 19), prepared breakfast to take to the mother and find out how Amos was faring but learnt that he had passed on through a comment from her social media post.

“The news hit me hard. I froze and collapsed on the ground. He was only 15 years old.  He reminded me so much of my own boys. I had wanted to save his life but I failed. I can still smell his blood, I can still hear his mother calling out his name and I can still see him trying to look at me as we were heading to the hospital,” Nakibuule says.

Nakibuule says she was informed by medical personnel that the stray bullet hit young Amos’ heart from his back and escaped through his cheek which explains the hole in the left cheek.

Nakibuule went to the hospital on Friday to get some contacts probably of the mother and when she got a telephone number, she called but it was the husband who picked up and told her the wife was not in position to speak. Amos Segawa was the eldest of the couple’s three children and his mother blamed herself for her son’s death because she called him out of a shop where he was seated, playing a game on her phone. She wanted him to hand over the phone and that is how the stray bullet found him.

Amos’ father appreciated all that the journalist did to save their child. “Thank you for being Amos’ mother at the last minute. It was good that he saw you during his final minutes and not the eyes of the person that killed him,” Amos’ father told Nakibuule.

The mother of two says that being a mother is the hardest job in the world because when she saw Amos, she forgot she was a journalist who had a duty to perform but all that was in her head was to help the young boy.

She regrets having delayed to act when the policeman told her there was an ambulance coming. Perhaps Amos Segawa would still be alive and that thought is still traumatizing to her.

From the experience on the street during the two days, Nakibuule calls upon the authorities to consider using tear gas instead of bullets because the innocent end up being victims of stray bullets.

On Wednesday November 18, my bus set off from Conrad Plaza, en route to Kajjansi. At Kibuye Roundabout, we came across a bonfire set in the middle of the road. Unable to proceed or turn back, we were forced to stop for a while. We were surrounded. Behind us, the crowd was pelting us with stones. We proceeded slowly past the road to Busaabala where a fire had been lit too.

As we approached the car park for vehicles to Busaabala, we came across a big crowd of youth throwing stones at the police. I tried to drive behind a garbage truck, using it as a shield but soon the truck drove off, leaving us exposed. Although I contemplated turning back, it was no longer possible. It was then that stones began to rain on the bus from the sides. All the bus’ side windows were shattered. At that spot where the bus was stoned, there is a CCTV camera at the turn to Busaabala.  Passengers were injured, some with head injuries and bleeding from their wounds. Owing to the massive panic, many alighted at Stella stage (before the bus’ destination of Kajjansi).

On Wednesday November 18 the bus was loaded with passengers setting off from Kampala and destined for Namugongo. The journey to Namugongo was smooth, with no incident.

On arrival in Namugongo, I got instructions from my supervisors asking me to park the bus as there were riots in town and the road was not safe.  I parked for a while and later received a phone call informing me that the situation was getting back to normal and that I should set off and return to the city.

As I approached Kyaliwajjala (not far from Namugongo), I noticed some disturbance. The road was blocked with rocks but there were no people immediately in sight. However, far ahead at the next junction, I could see the police. While I was parked deliberating my next move, a mob of youth descended on the road from behind the bus.

There was a red vehicle ahead with government number plates. When the driver saw the mob, he swung the car off the road, into a nearby murram road. I should have done the same but the bus could not enter that narrow lane.

The mob then started pelting the bus with stones. I did not panic at first because I did not think the bus was the target. I later realised it was and started the bus, driving towards where the police had deployed. Before I got there, the stoning continued as I tried to negotiate my way past the rocks littered on the road. Glass shattered and some of it cut me but I managed to drive through and reported the matter to my bosses at the office.

The damage: The windscreen was shattered at the front. Someone hit it with a block of wood. A big rock was thrown at the driver’s window and this also hit me. All the window glass on the driver’s side was shattered. Two other glass panes in the back were shattered.

According to Dr John Baptist Waniaye, the Commissioner for     Emergency Health Services, very few of their health workers are trained in radiological, biological, chemical and nuclear incidents which limits their ability to respond in such cases. 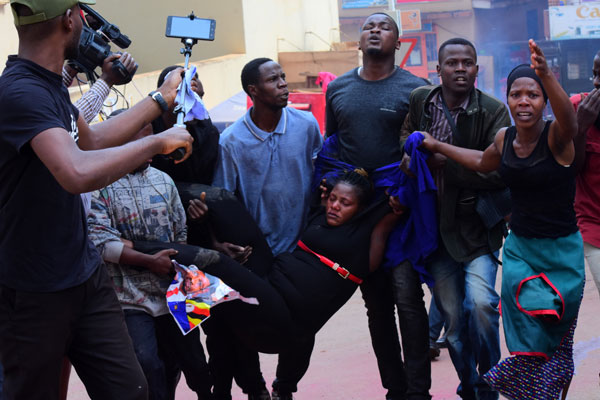 A woman who fainted during the protest being rushed for first aid.

“But we are working with Office of the Prime Minister to have a multi-sectoral medical disaster response team during such incidents. We do not have adequate response at scene of emergencies, the ambulance vehicles and teams are still few and the hospital emergency departments are not adequately resourced for major trauma incidents like riots,” Dr Waniaye says.

During the riots, Red Cross vehicles were seen carrying the injured to different hospitals. It was one of those busy days for the first aiders.  According to Irene Nakasita, the Uganda Red Cross spokesperson, they have an emergency preparedness and response contingency plan to guide emergencies of different categories. Ahead of the recent protests, which turned violent in many areas, Uganda Red Cross were prepared. “We deploy teams in areas earmarked as potential hot spots for where people might need support. We have trained RCATs (Response Action teams), we fuel our ambulances and position them ahead of time and assign officers and volunteers, plus medical sundries to manage the response,” she said. She adds that whenever they are called upon, they respond with impartiality.

She further said that the most affected in the riots included the male youth and a few women. Many of the victims were adversely affected by tear gas, choking on the smoke, fainting, bullet wounds, accidents or road traffic accidents while others were stoned.