Deogratius Sanyu’s story is one that captivated people the first time it was published. At 52, he had realised that dreaming only stops when we die. Ambitious, he has his sight on the area’s parliamentary seat and a profession in veterinary.
And that is why he registered at Batunduzi Model Primary School in Kyenjojo District and later sat for his Primary Leaving Examinations at the end of March this year.

On Friday 9, when the results were released by the Minister of Education and Sports, Janet K Museveni, Sanyu was among the 162 pupils of the school waiting for their results with bated breath.
“I was at the farm when I received a call from my friend Wellen Ngabirano, a head teacher at one of the secondary schools, congratulating me for passing PLE. Since he knew my index number, he had checked for my results and later forwarded them,” Sanyu says.
He scored aggregate 26.
Sanyu’s decision to go back to school may have raised eyebrows at the beginning. However, when the results were released, his victory was shared by all. For instance, when he received the good news, he visited Vision of Hope, the first school he had gone to after deciding to return to school – on reaching there, he noticed that both the head teacher and director already knew about his results and were, there to celebrate with him.
But that was not all, even the community joined in that at the time of this interview, he says people were still flocking his home to congratulate him.

About exams
Sanyu says his result did not come without challenges. He had for example planned to study for the entire year, sit for exams and join the campaign trail. Yet, with Covid-19 in the mix, things changed; schools were closed freezing the academic year and in the other sectors, the political year did not pause.

Because of this, when most of his classmates were revising for exams after schools re-opened, he was on the campaign trail in his party, NRM and later against other contestants.
But nevertheless, he had fun doing his papers, he says, he enjoyed doing social studies and science but struggled with mathematics and English. He often revised with other pupils and at times, when he went home, his son who was in Senior One too chipped in. 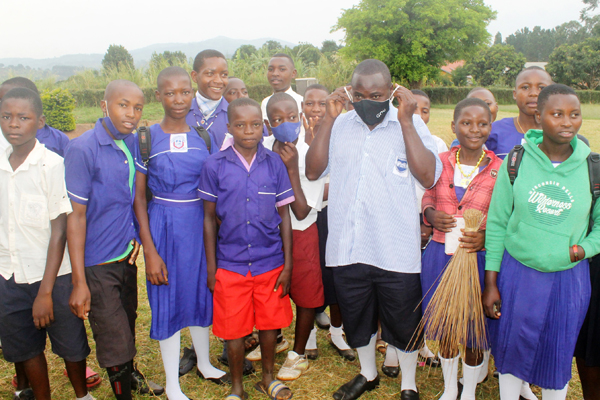 Inspiring others
Since results were released, different people like Sanyu in Batunduzi feel rejuvenated, “suddenly many see the need to go back to school,” he says.
He says the decision to go back to school has become a turning point for many people that many have made a decision to go back to school after the lockdown.
“I have inspired many old people who had dropped out of school and now they want to go back, I am happy about that,” he says.
Among those inspired by Sanyu is Julius Barisingira, 44, the current village chairman of Rwenyunyuzi in Butunduzi Town Council.
Barisingara dropped out of school in 1993, he was in Primary Six at the time.
“When I saw Sanyu going back to school at his age, I was inspired and when schools are re-opened, I will go back and study up to Senior Six,” he says.
Nicolas Byaruhanga, who also dropped out of school in 2006 in Primary Five, says he has been energised by Sanyu that he now plans to resume with Primary Six after the lockdown.

“Uganda is becoming extremely hard for uneducated people, those with qualifications are getting jobs and those without are being left behind,” he says.
Sanyu says people are continuing to congratulate him and some secondary school owners have approached him asking him to consider their schools for Senior One.

Sanyu says that at the beginning, most people did not take his decision serious and ridiculed the fact that he would wear a school uniform, “but when I completed exams, many people have approaching me seeking to know how they too can work on starting or resuming school.”
He wants to continue by joining secondary when the lockdown is lifted, he would want to see through the six years of secondary, but first, the four years, at least by 2026 – this will enable him contest in the parliamentary election.

Because of his passion for animals, he is considering veterinary medicine when he is done with secondary but to achieve this, he understands that he needs to be in the best schools.
Sanyu says that he wants to look for government schools in Kampala that enroll old people and can give him a conducive learning environment but if this fails, he still plans to enroll in a government school around Kyenjojo District.
“I want to stay in school but still look for money to support my family because I am my family’s bread winner,” he says.

Need for support
The father of ten, says he is aware of the challenges ahead and if it is possible, will need support, especially in raising fees for both his children and himself.
“My wish is to receive support from  President Museveni. He can give me local breeds of cattle that I can start looking after and sell milk,” Sanyu says.
He adds that he would not want to be given cash because he may end up channeling it to other things.

He has since started a piggery project at his home, he hopes this can generate enough money to take care of school fees for the entire family and still manage to feed them.
Sanyu is upbeat about joining secondary school that at the moment, his son, Ronald Happy is giving orientation in secondary life and how to ably handle it.
Violet Kyarikunda, Sanyu’s wife says she is happy her husband is back at school and is excelling at it, she pledges continued support.

“I was the happiest person in the family, I slaughtered a chicken and bought for him a bottle of wine, I was happier to see that he succeeded, we are now looking for his fees so that when schools reopen, he joins secondary because he dreams of completing Senior Six and joining the university,” she says.

Joining politics
In 2010 when the government elevated Butunduzi to a town council status, Sanyu decided to join politics.
“I chose a political position where I did not need any qualification and thus joined the NRM primaries for the Butunduzi Town Council chairperson,” he says.
He became the NRM flag bearer for the position but lost the general elections.
In 2016, he tried again and won, however, probably because of his busy schedule, balancing the campaigns and school, he lost this year’s election, but at least has something to smile about.