After the National Resistance Movement (NRM) officials on Wednesday afternoon confirmed that accredited journalists would depart for a retreat for the newly elected Members of Parliament (MP) at the National Leadership Institute (NALI), Kyankwanzi, on Thursday at 5am, I made the necessary plans.
This was after taking a Covid-19 test two days earlier.

Time check; 3:45am. I hit the bathroom, got dressed up and called Zaga, my boda boda man who dared to defy the curfew hours and braved the early morning cold to drop me off at Plot 10 Kyadondo Road, Kampala; the NRM offices and departure point.

On board were first-timers to Kyankwanzi, such as myself, and those who have been there countless times. At exactly 8:13am, we branched off the Kampala-Hoima highway.

Since it is a place frequented by the President, one would imagine that the road to Kyankwanzi is a super highway. But it isn’t. The 29km stretch snaking through the forest-like area is murram. The narrow road has several potholes and hardly any structures along the way, except for a few administrative structures at the Kyankwanzi Town Council.

Road to NALI
At exactly 9:13am, we encounter the first security checkpoint. Here, there is heavy deployment of the Uganda People’s Defence Forces (UPDF) and Special Forces Command personnel.

Only accredited journalists are allowed to the second point. There, checks are done by personnel in plain cloth who check bags, body temperature and ensure that work IDs are in synch with names on lists shared.

All is smooth until a journalist declines to put off his jacket, a pre-requisite to check-up, thereby inviting the wrath of an SFC official.

“You think I am a police [officer] that you are fond of undermining and go untouched? I will deal with you, my friend! This is a different place with no jokes,” the officer roars as he drags the reporter away. 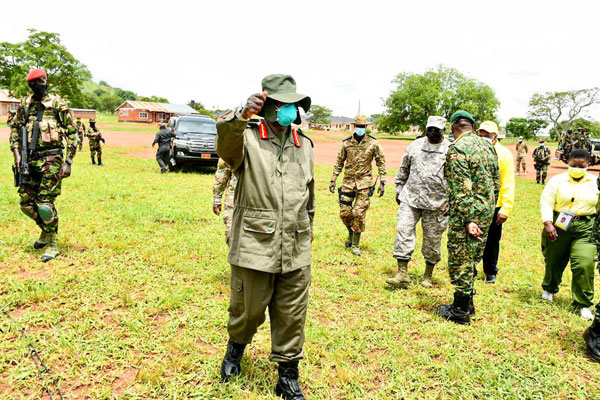 As this happens, the President’s convoy passes by. But the President isn’t in it. He would later fly to the place, surrounded by hills and thick bushes.

Inside NALI
From the checkpoint we are driven in mini-vans best known as ‘drones’ that pick up and drop off people to the venue for the retreat.

En route to the venue, our eyes meet dormitories that glitter from a fresh coat of paint. There is heavy military presence, with few buildings spread across the vast green acres of land.

The ‘drone’ drops us off at the final checkpoint. As we hand over our phones and equipment to be checked, Security minister Gen Elly Tumwine, and Brig Henry Matsiko, the UPDF chief political commissar, also get checked.

Covid-19 results are a must before one is issued with an accreditation pass to the venue.

At the retreat site are five tents. The first has refreshments; coffee and tea taken with roast gnuts and queen cakes.
At quarter past midday, President Museveni arrives in a military chopper and makes his way to the retreat amid ululations.

The main tent, opposite that of the NRM chairperson, has 243 MPs-elect, six of Uganda’s representatives to the East African Legislative Assembly (EALA), central executive committee (CEC) members and some ministers.

Everyone is dressed in military attire, but the most notable is Deputy Speaker Jacob Oulanyah in an attire believed to be a reserve of the SFC.

Life in Kyankwanzi
Through conversations shared by some MPs, they wake up at 5am.
Daily, they brave military drills, take lessons in handling firearms, and have lectures to change their mindset and appreciate NRM ideology, and get skills to later popularise the party among the citizenry.

“It is nice that I finally made it here and now that our President is here, we shall make our requests known,” one MP-elect tells me. “This place is good and I have changed a lot and I am going to teach others when I go back.”

“We have strategised to get his [President Museveni] attention,” he adds.
When President Museveni speaks, an unwavering wave of energy and excitement sweeps through the tents, amid thunderous claps from the MPs.

Unlike other places I’ve been to where the President addresses gatherings only once and leaves, here he addresses the MPs, takes breaks and returns at an hour of his choice. After officially opening the retreat, the President takes off lunch break for an hour.

The swiftness with which the food tent is cleared by the legislators is impressive. On the menu is boiled beef and beans, with matooke, sweet potatoes and white rice, some nakati and Minute Maid juice or mineral water.

Here, almost everything is done with military precision. Prayers for meals are written and recited. Even clapping is done in concert.

By the time they leave, I’m told, they should have mastered the patriotism prayer, the East African anthem, and learnt the Swahili version of the Uganda anthem.

Instructors will have to ensure that the MPs-elect are well grounded in the 10 leadership essays; drawn lessons from freedom fighters such as Kwame Nkrumah of Ghana, Oliver Tambo and Nelson Mandela from South African and Julius Nyerere from Tanzania.

After listening to the President’s lectures on patriotism to and pan-Africanism, it is time to head back home.