At 6:36pm on March 30, outgoing Aruu County MP Samuel Odonga Otto tweeted: “Deputy IGP [Inspector General of Police] Paul Lokech is politically persecuting me having got his son elected MP Aruu. I wish to thank President Gen Museveni for his intervention that got me out after seven days in jail.”

Mr Odonga had three hours earlier been granted a Shs500,000 cash bail by the Gulu Grade One Magistrate, Ms Christine Turibamwe, for allegedly assaulting a journalist in 2019.

Mr Odonga further alleged that the intervention of senior Acholi leaders to restrain Gen Lokech had been futile.
The journalist Mr Odonga allegedly assaulted and caused bodily harm to is Geoffrey Okot, of Choice FM in Gulu City.

Prosecution alleges that while at Pece Stadium in Gulu during a football match on June 16, 2019, Mr Odonga assaulted Mr Okot, who was on duty covering the tournament. Mr Odonga denies the charges.

Earlier that Tuesday morning, Mr Odonga had appeared before Pader Grade One Magistrate over allegedly assaulting a truck driver and illegally possessing a firearm. He was, however, granted a cash bail of Shs2 million.

Whereas Mr Odonga returned to court on April 6 and 28 before Pader and Gulu courts respectively when the hearings resumed, his lead counsel, Mr Opwonya has said they are filing a suit against the government over Mr Odonga’s illegal detention.

“We are suing government for keeping him in police custody beyond 48 hours, the Constitution prohibits that and we will also sue the individuals who caused his arrest. He was arrested on Tuesday and deliberately detained by police until Friday when he appeared in court,” he said.

Mr Odonga lost the bid to retain the Aruu County parliamentary seat for the fifth term in the just-concluded elections after losing to Mr Christopher Komakech, an Independent candidate who scored 9,327 votes against Mr Odonga’s 5,953.

Crime or politics
According to Mr Opwonya, the detention of Mr Odonga beyond the mandatory 48 hours was allegedly influenced by Gen Lokech.

“It is very disparaging to arrest someone from Gulu and drive them to Kampala and keep them at Jinja Road Police Station for three days, drive them back to Gulu and again move them to Pader for a hearing, which is a total abuse of the law and court processes.” Mr Opwonya added.

Mr Odonga was arrested by police in March from a hotel in Gulu City and detained for three days before being charged with two counts of malicious damage to property and assault before the Pader District Grade One Magistrate.

According to the charge sheet, the MP on May 6, 2018, at Ogan Kanakok, Pajule Sub-county in Pader, assaulted Mr Henry Mugisha, a driver of a Fuso truck before destroying its windscreen.

Other charges are of illegal possession of a gun and assaulting a journalist while at Pece Stadium in Gulu in 2019.
Shortly after his release on March 30, the legislator insisted that he would not be intimidated or discouraged from pursuing an election petition against Aruu County MP-elect Komakech. 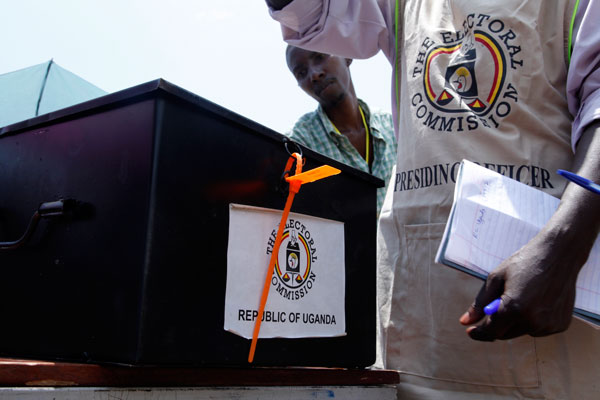 Speaking to journalists minutes after he was granted bail, Mr Odonga said the charges he was facing were trumped up to deter him from pursuing the petition, since he claimed Gen Lokech and the MP-elect are related.

“He (Gen Lokech) is the one bringing all these charges with the intention to stop me from filing an election petition. In fact, they had planned to arrest me before filing the petition which I did earlier, so, it is just about politics,” Mr Odonga said.

“If someone has taken me inside thinking they will break my soul, they are just radicalising me, and I have been radicalised. I am meeting for the first time today the person I am accused of assaulting in 2019, and the truck driver of Pader I have never known.”

Petition
In a letter dated February 1, addressed to the Electoral Commission (EC), Mr Odonga’s lawyers wrote to the electoral body, challenging Mr Komakech’s victory on grounds that he was irregularly nominated.

The lawyers allege that Mr Komakech did not resign from Butabika National Referral Mental Hospital where he worked and that he continued to receive salaries and allowances from the ministry even while he campaigned.

“The law required that all those running for parliamentary elections ought to have resigned from public office by July 12, 2020, but Mr Komakech did not submit the requisite resignation papers at the time of his nominations,” the letter reads in part.
Such anomalies, the lawyers argued, rendered the nomination of Mr Komakech “void ab initio and incurably defective.”
They also claimed that Mr Komakech continued to receive salary/allowances from the Consolidated Fund until October 2020 because he was still employed by the government.

In August, he reportedly received Shs700,122; he then received Shs700,122 in September and Shs100,000 in October, all through his ABSA bank account.
The Electoral Commission guidelines issued for nomination of Members of Parliament, dated June 16, 2020, provided that a person shall not be regarded as duly nominated and shall be regarded as void if the requirement for resignation from public office within the prescribed timeline by law is not complied with before nomination day.

Police deny claims
Repeated attempts to speak to Gen Lokech on telephone were futile. And Mr Komakech could also not be reached by press time.
The police, however, have refuted claims that Gen Lokech was behind the arrest of Mr Odonga.

The deputy director of the Criminal Investigations Directorate, Francis Olugu, told reporters that claims that Gen Lokech was behind Otto’s arrest are false.
Mr Olugu noted that charges Mr Odonga faces now date back to 2018 and 2019 respectively, way before Gen Lokech was appointed deputy head of the Uganda Police Force.

According to him, Mr Odonga’s charges are not related in any way to Gen Lokech, arguing that Mr Odonga was simply framing Gen Lokech to attract public sympathy.
Mr Okot, Mr Odonga’s alleged victim, says he is only interested in justice being served.

“I am not party to any politics being raised in regard to my case. It is my prayer that I am given justice and in the right way,” Mr Okot says.
Recently, the Acholi Parliamentary Group chairperson Okin Ojara said they had made some interventions to settle the matter amicably.

“As the chairman Acholi Parliamentary Group, I have approached both of them; Mr Odonga and Gen Lokech, to listen to each of their sides because our idea was to hear out both of them,” Mr Ojara said.
“Our concerns were about the clips circulating in the media where Odonga accuses Gen Lokech, and if that is true then it is really very unfortunate. We are, however, trying our best to mediate and settle this.”

Mr Odonga on the other hand is notabel for his controversy, the latest being in January 2020 when a statement he made while on a visit to Amuru angered Kilak North MP Anthony Akol, prompting him to beat up Mr Odonga.

Earlier on, Mr Odonga confronted and ridiculed a prelate on media for being tribal and partisan when the priest attacked them for mobilising a demonstration that was later foiled by police.