In March 2016, Nobert Mao, sporting his customary suit, made an intermittent visit to the Supreme Court, in Kololo, Kampala.

The Democratic Party’s president general’s visit to the Supreme Court was because he wanted to listen to the judgment of the case in which former prime minister Amama Mbabazi challenged the victory of his former boss, President Museveni, on grounds that it was fraught with fraud.

Mr Mao was ostensibly at court to show support to Mr Mbabazi, who he had backed during the 2016 general election, but no sooner had the nine judges stopped reading the judgement dismissing the petition than the heavens opened up.
“Even the rain isn’t happy with what has just happened,” Mr Mao then said while laughing.

On the face of it, Mr Mao was grieving because Mr Mbabazi, his newly found Opposition ally, had lost the case but there was more to this case than just the former National Resistance Movement (NRM) secretary general losing.

Months before Mr Mbabazi could dash to the Supreme Court, Mr Mao had just seen his dream of being re-elected Gulu Municipality MP crushed before his eyes.

In December of 2015, Mr Mao had turned up at the Electoral Commission (EC) offices in Gulu to be nominated as one of the candidates for the aforementioned seat, but the officials there had unpalatable news for him.

“You cannot be nominated because you don’t have a national identity card,” EC officials told him.  Having lodged a formal complaint protesting the EC’s decision, Mr Mao was invited for a hearing where he was told that the electoral body had shelved the register used during the 2011 elections and that the new register they had was based on the data sourced from the new national identity card register.

Mr Mao, by way of a letter, was informed by the EC that he couldn’t be nominated because he was not a registered voter.
Taken aback, Mr Mao, who was joined by Chapter Four, a civil society organisation, decided to dash to the Constitutional Court contending that the EC’s decision contravened Articles 61(e), 62 and 80 of the Constitution.

Article 61(e) specifically says one of the functions of the EC is to “compile, maintain, revise and update the voter’s register.”

One of the issues on which Mr Mbabazi hinged his petition on and was understandably dear to Mr Mao was what the former premier called “failure by the EC to compile a national voters’ register.” 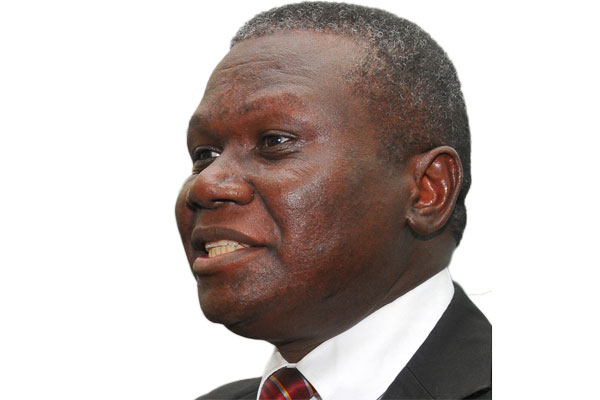 Mr Mbabazi’s legal team, which was led by Mohmed Mbabazi insisted that the EC instead illegally and irregularly retired the duly compiled 2011 voters’ register and purported to create another one, using data compiled by the Ministry of Internal Affairs for purposes of issuing national identity cards.

The EC, Mbabazi’s legal team insisted, had relinquished its authority to the National Security Information System Taskforce (NSIST) when it relied on the taskforce’s national identity card data to compile the new national voter’s register.

The EC in its defence contended that it properly compiled, revised and updated the national voters’ register in accordance with its constitutional and statutory duties and that apparently all voters were duly and legally identified as being on the voters’ roll in accordance with the Presidential Elections Act (PEA).

In determining this thorny issue, the nine justices said they had carefully studied the provisions of Article 61(1)(e) of the Constitution and sections 12 (f) and 18 of the ECA which govern this issue and also carefully considered the affidavits and submissions of the parties and made the following findings:

“There was a national voters’ register which was compiled, updated, displayed and used by the Electoral Commission to conduct the 2016 presidential elections. We have noted that section 18(1) of the ECA obliges the 2nd respondent [EC] to compile, maintain and update on a continuing basis a national voters register,” the nine justices unanimously ruled.

The justices said this issue was a non-starter since Mr Mbabazi had received a copy of the national voters’ register in his capacity as one of the presidential candidates and they also went to dismiss the allegation that the data was compiled by the Ministry of Internal Affairs, saying it’s not correct.

“The data was compiled by the National Identification and Registration Authority, on whose governing board the 2nd respondent [ EC] is a member,” the justices ruled, adding, “The compilation of the national voters’ register was in compliance with the Article 61(1)(e) and section 18(1) of ECA and section 65(2) of the Registration of Persons Act, 2015 which states that: The Electoral Commission may use the information contained in the register to compile, maintain, revise and update the voters’ register.”

The EC’s use of data compiled by the National Identification and Registration Authority, the justices said, to compile the national voters’ register did not in any way negate the independence of the EC which is guaranteed under the Constitution.

“That the petitioner did not adduce any evidence of any person who had been disfranchised by the 2nd respondent’s [EC] use of the new national voters’ register in the 2016 Presidential elections,” the justices ruled in rebuke to Mr Mao who didn’t bother to swear in an affidavit.

“Accordingly, we find that the 2nd respondent [EC] complied with the provisions of the Constitution, the Electoral Commission Act and the Registration of Persons Act.”

Five years after the Supreme Court upended Mr Mao’s hopes, the Constitutional Court, which is the lower court, has come up with a completely different finding, with this time, the EC being the loser.

In Mr Mao’s case, which had gathered dust at the Constitutional Court, the EC through its then chairperson Badru Kiggundu said it had set May 11, 2015, as the cut-off date for the update exercise and that the electoral body is required under the law upon completion of the update exercise to display the national voters register for 21 days.

“It follows that the first petitioner ought to have raised his objection or complaint during the update and display exercise in accordance with the law,” Mr Kiggundu said.

Attached by Mr Mao as the second respondent, the Attorney General defended the EC’s use of the data from Internal Affairs, saying Parliament enacted the Uganda Registration of Persons Act in 2015 with the objective of modernising and consolidating the law on the registration of persons in Uganda.

Josephine Kiyingi, the Principal State Attorney who swore an affidavit on behalf of the Attorney General, said section 65(2) of the Registration of Persons Act 2015 provides that the EC may use the information contained in the national identification register to compile, maintain, revise and update the voters register and to do so she stuck her neck out that it wasn’t inconsistent with the Constitution.

In determining the issues, Justice Christopher Izama Madrama, who wrote the lead judgment which was agreed to by justices Kenneth Kakuru, Irene Mulyagonja and Catherine Bamugemereire, said no law cited mandates the EC to use the national identification project data in the register to compile, maintain, revise and update the voters’ register.

“Without much ado, it’s plain that the EC failed in its duty for whatever reason, to maintain its databank in which the first petitioner [Mao] was clearly a registered voter,” Justice Madrama said in his 40-page judgment.

“It cannot purport to have maintained its databank of registered voters and for that reason, it was erroneous for the EC to retire its databank as this contravened its mandate to maintain the voters register under Article 61 (1) of the Constitution.”

The function to compile, maintain, revise and update the voters’ register, according to Justice Madrama, has been written in a logical order under Article 61(1) (e) of the Constitution.

“Compilation of names of voters is a continuous process in which new names are entered into the register. Revision of the register is not only about modernising it, it concerns the necessity on the basis of the new and any emerging data to check and correct any errors and for any other valid reason to revise and update the register,” Justice Madrama adjudged.

“Last but not least, to update the register has to be a continuous process in which persons attaining the age of 18 years on a monthly basis or on yearly basis are entered on the register and persons who could have died are removed from the register or any person who is no longer eligible to vote should be deregistered.

Retiring the voters register as the EC did, according to Justice Madrama, is clearly inconsistent with Article 61(1) (e) of the Constitution because the word “retiring”, the judge explains, may only mean getting rid of the paper but maintaining the information which was in the old paper or databank in the new register.

“It can’t mean commencing a new databank,” Justice Madrama ruled referring to the word retiring. “This is because the Electoral Commission is required to maintain the register.”

Then Justice Madrama posed a question: Was there a need to register voters afresh?
“What has been complied has to be maintained and revisions and updating of the register will depend on occurrences that may lead to new registration or deregistration,” he said.

“In the case of the petitioner and any other eligible voter, there was no basis for their names to be removed from the list of voters except as an administrative error in the compilation of data which ought to be rectified immediately it is brought to the attention of the Electoral Commission. It’s not constitutional or sufficient reason to contend that the names of a registered voter at the material time was not in the national ID databank.”

Deputy Chief Justice Richard Buteera, who led the coram, dissented saying since Mr Mao alleged in his petition that his rights were violated he should have sought those rights to be enforced in the High Court.

“I don’t find that there is an issue for constitutional interpretation and do not, therefore, find that this court has jurisdiction,” Justice Buteera dissented.
Asked about the two conflicting positions of the two courts, constitutional law expert Peter Walubiri, who represented Mr Mao in this petition, said the position of the Constitutional Court stands.