Abbasi Kibazo, President Museveni’s comrade-in-arms, was arrested in 1981 and has never been seen again.
Kibazo was arrested by security operatives on suspicion that he was a supporter of the National Resistance Army (NRA), a rebel movement led by former minister of Defence. On February 6, 1981, Museveni launched a military struggle against the Uganda Peoples Congress (UPC) government in Luweero District and captured power five years later.
On June 6, 1981, several NRA rebels were arrested at Kikandwa in Luweero and were summarily executed by the Uganda National Liberation Army (UNLA).

About a week later, on June 13, 1981, Uganda’s vice president and minister of Defence Paulo Muwanga visited Luweero District. He told people at a rally that government had good intelligence on the rebels and their collaborators and that they were going to arrest them soon.
In July 1981, Kibazo was arrested and was last seen at the detention cells located under Paulo Muwanga’s office at the Nile Mansions, now Kampala Serena Hotel.

The disappearance of suspects started in the 1960s when Milton Obote was president. However, it went through the roof during Idi Amin’s reign in the 1970s.
In the 1980s, the vice returned with the Obote II regime and Kibazo was one of the first politicians to disappear under the regime.
Also important to note is that most of the victims of political arrests and disappearances were suspected or indeed were NRA collaborators.

Kibazo is arrested, taken to Nile Mansions
In 1982, a year after Kibazo had been arrested and declared “disappeared,” Amnesty International, a world’s human rights and justice defender, attempted to investigate his disappearance.
The Amnesty International reports of Uganda: 1982, 1983 and 1984 indicate that Kibazo was arrested on July 12, 1981, by security personnel from his home in Bukoloto village, Mukono District.

He was detained at Kayunga Police Station for one night and the following day, July 13, he was transferred to the Nile Mansions Military Intelligence Centre in Kampala, from where he was last seen.
Political prisoners were detained specifically in rooms No.316, 318, 326 and 328 located under Muwanga’s office.
Amnesty International says when they contacted the Uganda government for possible information about Kibazo’s arrest and detention, the response was “he had never been arrested by any one working for the government of Uganda”.

Museveni talks about Kibazo
In his book Sowing the Mustard Seed, President Museveni talks about Abbasi Kibazo several times. On January 25, 1971, the day president Milton Obote was ousted in a military coup, Museveni, Kibazo and others left Kampala for exile in Tanzania because they would not be safe in Uganda.
On Page 48, Museveni mentions how he, Kibazo and others left Kampala for Tanzania.

“That afternoon, Richard Kaijuka, who also lived at Kireka and who later became a minister in the NRM government, gave me some money, and I left Kampala that night for Mbarara. There I was joined by four comrades, Erifazi Laki, the Saza chief of Rwampara County, Ankole, Yuda Katundu, Abbasi Kibazo and Zubairi Bakari from Kampala. We crossed into Tanzania at Murongo Ferry on January 27,” Museveni writes.
On Page 49 Museveni adds that after some time, “Laki, Katundu, Kibazo and Bakari returned to Uganda, re-entering through Mutukula”. 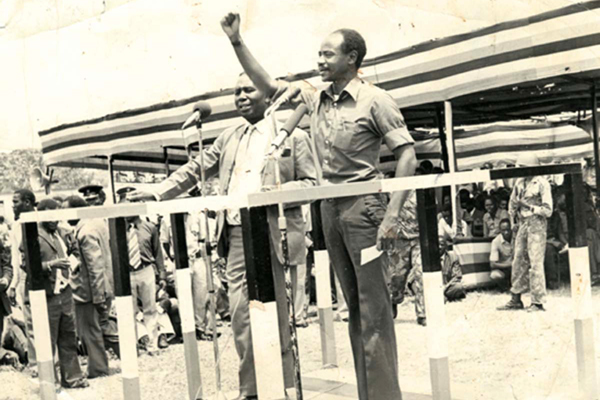 “In 1971, alone, I travelled in and out of Uganda five times: in February, April, June, September and December. Each time I would stay for about a week, mostly in Kampala. The first time I came into Uganda in February 1971, I stayed with Martin Mwesiga at Nsambya and later Mwesigwa Black at Naguru-Katale. Sometimes I would stay with Abbasi Kibazo at Kibuli,” Museveni writes.

Speaking about Fronasa sleeper cells on Page 57, the President mentions Kibazo as one of their liaisons.
“We also had one in Kampala where intellectuals such as Eriya Kategaya liaised with the workers’ cell (abawejjere) of Haruna Kibuye, Zubairi Bakari and Abbasi Kibazo. This cell in Kampala was particularly important for two reasons: they were able to gather intelligence against the reactionary pseudo-Muslim groups led by Amin, and they were responsible for safeguarding my personal movements within Kampala whenever I came from Tanzania. As Muslims, these comrades were valuable on both counts. In fact, in order to blend better in the movement, I also pretended to be a Muslim by using Muslim names and wearing Muslim caps.”

Who was Kibazo?
Kibazo was born in the early 1930s. He joined the Uganda Peoples Congress (UPC) party led by Milton Obote at Uganda’s Independence. Later, he was recruited into the President’s Office in the political intelligence gathering department.
While there, he met Yoweri Museveni who was in the research department. Museveni joined the President’s Office in 1970 as a fresh graduate from the University Dar es Salaam, Tanzania.

When president Obote was ousted in January 1971, Kibazo was one of the first former staff of the President’s Office to escape to Tanzania, but soon returned to Uganda and became an underground Front for National Salvation (Fronasa) activist operating in Buganda region.

Fronasa was a military movement led by Museveni, formed in Tanzania to fight Idi Amin’s regime. When Amin’s regime fell in April 1979, and a new government, the Uganda National Liberation Front (UNLF), was formed, Kibazo became the Kampala branch chairman of the UNLF political umbrella.
When the Uganda Patriotic Movement (UPM) party was formed in June 1980, Kibazo became a member and mobiliser.