In compiling his new-look Cabinet, President Museveni had to apply both the carrot and the stick, rewarding individuals and regions that proved loyal, and punishing those that wavered during the January 2021 general election.

Mr Museveni admitted on Thursday afternoon that compilation of the list that has Maj (Rtd) Jessica Alupo and Kakumiro Woman MP Robinah Nabbanja as Vice President and Prime Minister-designates respectively, was a delicate task that required him to go under the radar.

“So many of you are so good. I don’t know what to do. I look at this one, but now the tribe, the religion, the balance… Now in forming the Cabinet… I was adding, subtracting, dividing, then coming back,” he told MPs in a speech that he delivered at Kololo Independence Grounds shortly after the reading of the 2021/2022 Budget.

Transition in mind?
Dr Charles Mbalyohere, the immediate former president of the Non-Government Organisation (NGO), Busoga Yaiffe (BY), argued that though large and seemingly in appearing spineless in quite a number of area, the Cabinet suggests that Mr Museveni is preparing for a transition.

“The ground is being set for some major changes ahead. Mzee knows it is time to start a gradual withdrawal and prepare the country for life after him,” Dr Mbalyohere argues.
He, however, says such a process would require involvement of the Opposition and building bridges with other State and non-state actors.

Mr Onapito Ekomoloit, a former presidential press secretary and MP for Amuria County, partially agrees with Dr Mbalyohere, saying the crop of people in the Cabinet appear willing to do the party’s bidding with or without Mr Museveni.

“This Cabinet is fairly about people who have some grassroots stability, but more importantly loyalty. And I really want to emphasize the ‘if he was not there and there is some plan that the party or army has’. Are these people who would be able to deliver on that plan without rocking the boat? I think this is the kind of people that he has brought closer,” Mr Ekomoloit says.
Prof Paul Wangoola, a former member of the National Consultative Council (NCC), which served as Uganda’s Parliament in the immediate aftermath of the fall in April 1979 of the Idi Amin regime, disagrees.

He argues that the “balance” that Mr Museveni was talking about was in reference to the need to form a Cabinet that will serve as a tool to help him retain support in areas where he thrived in the last general election, while at the same time ensuring that those that did not vote for him do not slide further into the hands of the Opposition.
The former Makerere University don says it, therefore, followed that what was at the back of Mr Museveni’s mind was the 2026 general election.

“If you asked Mr Museveni and his NRM that, ‘what is better than power?’ They will tell you that ‘more power’. And if you further asked that, ‘And what do you need power for?’ He will most probably tell you that, “I need power to maintain myself in power”. That means acquiring more and more power. So this Cabinet is really about him maintaining himself in power and acquiring perhaps more power,” Prof Wangoola says.

Carrot and stick?
The biggest talking point since he was declared winner of the January 21 elections has been how he would deal with Buganda and Busoga, former bastions of support that voted against him.
Museveni lost Buganda to the National Unity Platform (NUP), led by Mr Robert Kyagulanyi, who garnered 1,453,535 votes against Mr Museveni’s 838,858 votes, a margin of 614,677 votes.

Former ministers Beti Kamya and Nakiwala Kiyingi, who had converted from the Opposition and contested the elections on an NRM ticket, also suffered at the hands of NUP candidates.
The constituencies of Edward Kiwanuka Ssekandi and that of Haruna Kasolo were taken by DP candidates.

Those losses presented the NRM with a dilemma, but Mr Ekomoloit says whereas Buganda has now lost the vice presidency, a seat which has for the last 18 years been in the hands of a Catholic from Buganda region, the reappointments and appointment of new people to the Cabinet should help stem the possibility of the region sliding further into the Opposition.

“He has given Buganda the stick and the carrot. He has removed their traditional expected position of vice president, denied them the prime minister’s job, but returned some of the defeated ministers to say look, ‘I am magnanimous, even when you reject my people please know that you still have a place in my heart’,” says Mr Ekomoloit.

Prof Sabiiti Makara, who teaches Political Science at Makerere University, agrees that the loss of the vice presidency and reduction in the number of ministers from 15 to 13 was a blow to Buganda, but does not believe that this was intended to pass on a subtle message to the region.

He, however, hastens to add that those qualities would have perhaps been of no consequence if Museveni’s focus was not on the next general election.

“If Buganda became extremely vacant of ministers then re-launching himself in Buganda at the next election would be very difficult… Museveni’s strategy is to use those who have been retained to reclaim Buganda at the next general election. Many of them will work head and toe to get re-elected and to revamp the party in Buganda,” Prof Makara says.

Unique case of Busoga
Busoga just like Buganda, turned its back on Mr Museveni during the last election. Whereas it was not the kind of routing that he and the NRM suffered in Buganda, he garnered 404,862 votes against Mr Kyagulanyi’s 437,059 votes. 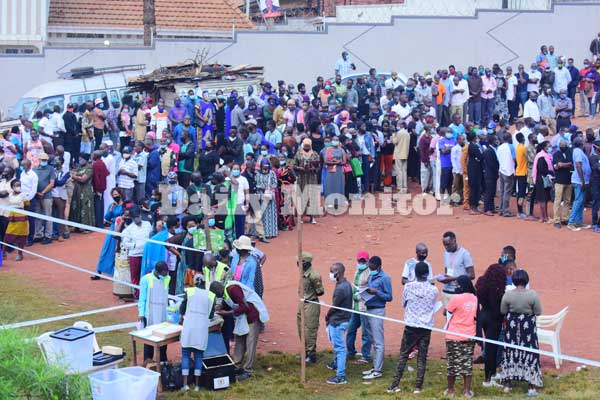 Those developments notwithstanding and the decision of the former Speaker of Parliament, Ms Rebecca Kadaga, to go against the decision of the CEC and contest as an independent candidate for the job of Speaker of the 11th Parliament, Mr Museveni named a total of nine people including Ms Kadaga who he named as 2nd Deputy Prime Minister and minister for East African Affairs.

Other Cabinet nominees include Ms Lukia Isanga Nakadama, Ms Justine Kasule Lumumba and in so doing raising the number of Basoga at Cabinet level from five to nine. Was he rewarding Busoga for exhibiting a measure of rebelliousness?

Both Prof Makara and Mr Ekomoloit agree that his handling of the Busoga question has a lot to do with preparations for the next general election.
“He was sending a message to Busoga. He was saying that, ‘Yes you can make mistakes, but Mzee is always good hearted and tolerant,” Mr Ekomoloit says.

Rewarding loyalty
However, even when the 2026 general election seems to have been at the back of his mind, Mr Museveni has always been known to reward loyalty a practice that dates back to 1996.

In the run up to the June 1996 parliamentary elections, Mr Museveni who had been declared the winner with 4,428,119 votes (74.2 per cent), Dr Ssemogerere second with 1,416,139 votes (23.8) and Mr Mohammed Kibirige Mayanja last with 120,000 votes, campaigned in a select number of constituencies where the so-called “Movementists” ran a risk of losing to “Multipartyists”.

The first such rally was held in Namungalwe Sub-county, in Kigulu North constituency in Iganga District. Describing the Movement as a Mercedes Benz, he urged the voters not to send (vote) Volkswagens (Multipartyists) to Parliament, promising to handsomely reward those that heeded his call.

It, therefore, followed that when in December 2019 when he carried out a reshuffle in which he dropped six ministers, four out of the eight new appointees to the Cabinet had been at the forefront of passing the December 20, 2017, the age limit Bill.

Ms Nankabirwa and Mwesigwa Rukutana, who were members of the Cabinet, had also been expected to have been promoted for their role in the constitutional amendment.

Whereas Ms Nankabirwa, just like six others in that category lost at the parliamentary polls, Mr Museveni has reappointed her, a decision which Prof Makara says is down to a reward for her hard work and loyalty to the party.

“Ms Nankabirwa is useful to the party in terms of mobilisation and technical competence. She works hard for the party, but was just swept by a wave,” Prof Makara says.

Teso factor
Similarly, Prof Makara says if Teso has been rewarded with the post of Vice President, Deputy Speaker of Parliament, the Foreign Affairs portfolio and a few others, it is because it has been exhibiting more than loyalty to the NRM since about 2016.

“Teso has since 2016 been voting Museveni and the NRM and he has decided to reward them handsomely. These people will die to see that Mr Museveni is re-elected,” Prof Makara says.

Mr Ekomoloit, who hails from Teso, argues that at this point in time loyalty on the part of individual actors is a much more important factor than the perceived loyalty of Teso as a region, adding that if Ms Alupo has been appointed Vice President, it is because she has proved that she can be reliable.

The Kadaga question
It would, however, appear that even Museveni has in some cases had to reciprocate the gesture of loyalty.  Disciplinary action had been expected to be taken against Ms Kadaga following the dramatic events of May 23 when she stormed out of the CEC meeting at State House Entebbe before declaring her intention to contest for the job of Speaker as an Independent candidate, a development which pitted her against the party chairman and the entire State machinery.

Days after she lost the contest to Mr Jacob Oulanyah, then NRM secretary general Justice Kasule Lumumba announced that Ms Kadaga could be subjected to disciplinary action for defying the party’s position, comments which were construed to mean that it was the beginning of the end for her.

However, by including her name on the list, albeit below that of Ms Nabbanja in terms of hierarchy, Mr Museveni was extending an olive branch, which Mr Ekomoloit says is a gesture that he too values those with whom he has worked over a long time.

Loyalty, as they say, breeds more loyalty. Could Museveni have learnt that better than any other politician?