The first quarter of 2021 has seen pieces of good news for the economy. Not just Uganda, but as the entire world is just emerging from the chokehold of Covid-19 every bit of good news makes a lot of difference and is reason to wake up energised to get to work, to rebuild our Uganda.

The arrival of 864,000 doses of Covid vaccine on March 5 was the beginning of the restoration of order process. Uganda was allocated 3.5 million doses of the AstraZeneca vaccine by the COVAX facility to Uganda to be delivered between January and June. That is approximately 20 per cent of the required quantity for Uganda as government is left with the burden of commercially procuring 18 million doses of the AstraZeneca vaccine.

As a member of the Covid-19 vaccine advisory committee, I was honoured to participate in launching the vaccination drive. I was privileged to be among the first five people to get the vaccination as a member of the committee and representative of Uganda’s private sector. Several weeks later, I have not had the slightest adverse effect, not a headache or pain in my arm and I am looking forward to my second shot.

The other great piece of news was the headline Stanbic Purchasing Managers’ Index (PMI) report released in early April that shows that Uganda’s economy is recovering, and steadily returning to normal. The index is computed from a monthly study by Stanbic Bank of a basket of 400 private businesses and their activity performance within the month across the various sectors of agriculture, industry, construction, wholesale and retail.

The PMI measures five major components, namely: New orders, output, employment, suppliers’ delivery times and stocks of purchases. Readings above 50.0 signal an improvement in business conditions on the previous month, while readings below 50.0 indicate a deterioration.
The March readings stood at 53.2, up from 51.2 in February. The March readings are the highest since November 2020, when the PMI averaged 52.9. 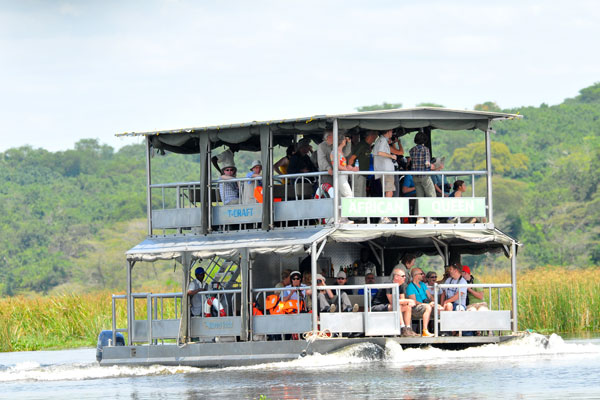 Tourist have a good time in Uganda. The 6th edition of Pearl of Africa Tourism Expo will run from April 27 to 29. PHOTOS | FILE

The Stanbic PMI concurs with a similar business tendency indicators study that is done by the Bank of Uganda, which also measured 52.04, which is 18 points above the 33.97 measured in May 2020 — an all-time low, since the Central Bank started tracking the index in July 2012.
Both indicators signal a slow but steady recovery.

This good news was complemented by the monetary policy statement by the Bank of Uganda that shows that Uganda’s economic recovery is stronger than was projected at its last meeting in February.
On April 14, the Central Bank released their monetary policy statement, reporting that Uganda’s economic recovery was stronger than had been projected.

According to the statement, the Uganda Bureau of Statistics (Ubos) in its updated quarterly GDP estimated the contraction in real GDP at 1.1 per cent in 2020, lower than the initial projections of about two per cent. Economic growth in the quarter to December 2020 is estimated to have picked up by 1.6 per cent from a year earlier, a significant improvement compared to the revised contractions of 6.1 per cent and 0.1 per cent, respectively in the quarters to June 2020 and September 2020.
However, the education, hospitality, and tourism sectors remain depressed.

The services sector is estimated to have contracted by 2.6 per cent in the quarter to December 2020 and as a result, the GDP growth outlook remains unchanged at 4.0 - 4.5 per cent in FY2021/2022. Nonetheless, the recovery is expected to strengthen, especially as more Ugandans, on one part and the rest of the world, on the other, embrace the Covid-19 vaccination.

That is why, as a key player in the tourism sector, I welcome the idea by the Uganda Tourism Board (UTB) working together with the mother-ministry, the Ministry of Tourism, Wildlife and Antiquities (MTWA) and the private sector, to launch and host the 6th edition of Pearl of Africa Tourism Expo, commonly known as POATE.

POATE is a business-to-business (B2B) and business to consumer (B2C) meeting of all the players in the tourism value chain such as tour and travel agencies, hosted buyers, hoteliers, airlines etc for purposes of doing business.
The event will run from April 27 to 29 under the theme: “Restarting Tourism for Regional Economic Development.”

POATE 2021 is going to be different from all the previous conferences. For the first time, the event will be hosted virtually, eliminating previous physical and space limitations that put a cap on the numbers of participants. Perhaps even more importantly, a virtual POATE is in line with the current reality that is digital tourism - where more and more clients are relying on digital platforms such as Facebook, Twitter, TripAdvisor, Booking.com etc., to make both travel decisions and close a sale.
The faster the Ugandan tourism industry wakes up to this reality the faster it will be for our recovery.

I would, therefore, like to urge all of us, players in the tourism industry to embrace POATE 2021. Let us all go and close that deal - it could make all the difference.
As the Simba Group of Companies, we are very passionate about the recovery of the tourism industry, not just because we are deeply invested in it, but also because it is a bastion of hope for many Ugandan livelihoods.

That is why Protea Hotel recently partnered with the MasterCard Foundation and the Private Sector Foundation Uganda (PSFU) to train and retrain, especially young women and youth in the catering and local crafts industries who are some of the categories, hardest hit by the unprecedented Covid-19 impact on the tourism sector.

Mr Patrick Bitature is the founder, chairman and ceo of Simba Group of Companies.