Did “John Byarugaba” ever exist? It is still a big mystery in Kyamuhunga, a far-flung village, blessed with expansive tea plantations, found in the western district of Bushenyi.
No one in Kyamuhunga, where people tend to know each other, had ever heard of “John Byarugaba,” but this name would soon surface.

On March 1, 2007, an anti-terrorism urban hit squad, commonly known as Black Mamba, stormed the High Court’s Criminal Division in Kampala as they brandished assault rifles and grabbed nine treason suspects who had been released on bail.

Three of them were transferred to Bushenyi the following day and charged with murdering “John Byarugaba” in Maramagambo Forest on July 17, 2002. The three were, in one way or the other, associates of Dr Kizza Besigye, the Opposition figurehead, who had mounted a challenge against President Museveni’s hold onto power.
The trio was Dr Besigye’s brother Joseph Musasizi Kifefe, Frank Atukunda, and Darius Tweyambe - all Forum for Democratic Change (FDC) party activists.

Charges dropped
In November 2009, Richard Buteera, then Director of Public Prosecutions (DPP), dropped the charges against the trio, but it was too late: Musasizi had passed on in late 2007, with the FDC insisting he had been poisoned either when he was at Nyamushekyera Prison in Bushenyi, or Luzira, in Kampala.  Still “John Byarugaba” has never been known to have existed.

On June 12, 2007, the High Court had granted Musasizi bail on account of grave illness.
But every time President Museveni suggests that there should be reforms in Uganda’s criminal justice system such that bail would be unavailable for people charged with capital offences, many think of those who have been arraigned on politically motivated charges and perhaps die in prison as a result of such.

Every time there is a spate of insecurity, Mr Museveni’s reaction has been diverse but not that different: From registering phone numbers to instituting National Identity cards, scrapping bail, banning of putting on hoods by motorcyclists, instituting of surveillance cameras on highways and streets; and most recently placing tracking devices in all cars and motorcycles, but the crime he seeks to mute still runs unabated.

Mr Museveni’s reaction to the September 24 re-arrest of Makindye West Member of Parliament (MP) Allan Ssewanyana, who had been granted bail having been charged jointly with Kawempe North MP Muhammad Ssegirinya with murder and terrorism arising from the recent killings of people using machetes in Greater Masaka had his verified  Twitter account appearing to have already convicted the suspects even before the trial takes shape.

“For somebody to kill a person and you give them bail is a provocation. It is abominable. I would like us to cure this ideological disagreement. This bail, what is the hurry? Who are you trying to please?” the President, who has been in power since 1986, said.
“We are going to work on this. I am going to summon the NRM Caucus and if necessary, we put it to a referendum. With this provocation, people will take the law into their [own] hands,” he added.

Indeed, the NRM parliamentary caucus convened this week, and it’s reported that the MPs didn’t agree with Mr Museveni’s views but they were given two more weeks to go and “consult”.
As things stand, bail for all kinds of offences is still part of legal books with the spirit of giving it out laid out in Article 28: Presumption of innocence.

Though it is provided under the Constitution, giving of bail is largely discretionary since by and large it’s a judge or a magistrate who determines who will get bail or not depending on how he or she understands the case.
The Judiciary inexplicably has held firm on this despite repeated pressure from Mr Museveni over the years incumbent Chief Justice Alfonse Owiny-Dollo has repeated the same stance.
“We know that capital offences are a grave concern to the community,” Justice Owiny-Dollo said on Monday during the Benedicto Kiwanuka memorial lecture, which was attended by President Museveni. 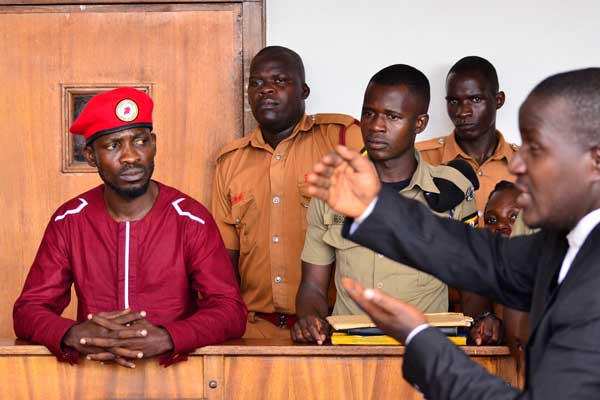 NUP leader Robert Kyagulanyi, aka Bobi Wine (left), in court in April 2019. He had been charged with treason earlier. PHOTOS / ABUBAKER LUBOWA

“So, in [the] exercise of judicial discretion, it’s the duty of the judicial officer to look at all these circumstances and make a decision whether to grant or not to grant,” he added.
Despite the pleas from politicians both in the ruling NRM and Opposition, judges, civil and society, President Museveni has made it clear that he would fight bail both “legally and politically”.
Though Mr Museveni said at the Benedicto Kiwanuka lecture how citizens had rejected bail for capital offenders during gathering of views that would constitute the 1995 Constitution, throughout the 1990s, bail was never debated until the 2000s.

Contention over bail
The contention over bail started on November 16, 2005, when a group of security operatives who later came to be known as the Black Mamba, in a movie-like-style, stormed the High Court to re-arrest Besigye and 22 other alleged People’s Redemption Army (PRA) suspects, an alleged rebel outfit, who had been granted bail by Justice Edmund Sempa Lugayizi after being charged with treason.

Dr Besigye had just returned to the country before the 2006 General Election after he fled to South Africa in 2001. Dr Besigye, who had at the time been placed under house arrest at his home in Luzira, a Kampala suburb, beat security and fled to exile, but once he returned, he was slapped with both rape and treason charges.
When Justice Lugayizi granted Dr Besigye and other PRA suspects bail, the Black Mambas stormed the court and re-arrested them. The following day the suspects were charged, just like in the High Court, with treason before the General Court Martial.
The Constitutional Court later ruled that it was unconstitutional to charge people with the same charges in the High Court and the Court Martial.
Once the Black Mambas stormed the court, Justice Luyagyizi resigned from hearing the trial and he was followed by Justice John Bosco Katutsi, who also after throwing out the Besigye rape charges, declined to hear the treason charges.

The case was allocated to Justice Vincent Kagaba, but after hearing a couple of witnesses, the Constitutional Court halted the whole trial.
The decision to grant Dr Besigye bail didn’t get unchallenged as the State filed constitutional petition in which the key gist was “whether, under Article 23(6) of the Constitution, courts have the discretion to grant or not to grant bail.”
Buteera, then DPP but now Deputy Chief Justice, had objected to the bail application on two grounds; that the court has the discretion to grant or not to grant bail, pointing out that, however, in Dr Besigye’s case, there were no exceptional circumstances as stipulated under Section 15 of the Trial on Indictment Act, Cap 23, which would warrant the exercise of court’s discretion in the former presidential candidates’ favour.
Secondly, the DPP insisted that the High Court had given conflicting interpretation of Article 23(6) (a) of the Constitution, thus leading to serious confusion in the lower courts, which are bound by the High Court decisions.

But justices Laetitia Mukasa-Kikonyogo, Galdino Okello, Mpagi Bahigeine, Christine Kitumba and Constance Byamugisha were having none of it.
“The applicant should not be deprived of his/her freedom unreasonably and bail should not be refused merely as a punishment as this would conflict with the presumption of innocence,” the five justices unanimously ruled on September 25, 2006, referring to Dr Besigye.
“The refusal to grant bail should not be based on mere allegations. The grounds must be substantiated. Both High Court and the subordinate courts have discretionary powers to set bail conditions that they deem reasonable, though this must be done with caution. Bail granted,” they ruled.
Lawyers who have represented Dr Besigye and other people who have been charged with capital offences but only for the trials never to see the light of day insist that President Museveni’s insistence on removing bail for such people is political, rather than motivated by the need for justice on behalf of the complainants or community.
“He wants to hold his political opponents in detention without trial,” a lawyer, who has represented Dr Besigye for a long time but didn’t want to be named such that he could speak freely, said.

“If bail is scrapped and they charge you with murder you, could take a long period in jail since Uganda’s criminal justice system is slow because we have few judges. The intention is clear, keep political opponents in jail without trial, but this time do it legally,” the lawyer added.
Another example the lawyer cited is that of 2016 when Dr Besigye, for the second time, was charged with treason, which attracts a maximum penalty of death on conviction.
The DPP in the charge sheet had claimed Dr Besigye committed treason between February 20 and May 11 at various places in Kampala and Wakiso when he declared himself the winner of the February 18, 2016, presidential election.
After being granted bail, the DPP didn’t follow through with trial yet Besigye had been taken to Moroto District in Karamoja and then back to Kampala for trial.

“All these cases you clearly see a pattern: They are not interested in trying people but rather incarcerating them for a long time because they know they have no case and removing bail is one way doing it,” the lawyer said.
President Museveni’s sustained attack on bail seems to have been a changed tactic. The previous, having seen that judges have continued to give out bail, Mr Museveni had decided that people who are accused of capital offences and corruption should be charged at the court martial.

A group of security operatives, who later came to be known as the Black Mamba, storm the High Court in Kampala to re-arrest Dr Kizza Besigye and 22 other PRA suspects on November 16, 2005. PHOTO / FILE

Court Martial vs civilian court
Indeed, during the 2010 State-of-the-Nation Address, Mr Museveni offered that corruption cases involving civilians be brought before the Court Martial instead of a civilian court.
“…there are loopholes in the trial of corrupt officials in the civilian courts because courts waste a lot of time searching for evidence. Therefore, referring corrupt officials to the court martial is a new idea which the MPs should explore,” Mr Museveni said then.

Getting bail in the General Court Martial is a painful process as was exhibited during the recent incarceration of National Unity Platform (NUP) supporters who spent months on remand after being charged with unlawful possession of ammunition.
With the Constitutional Court this year ruling that military courts can’t try civilians, although the case is now at the Supreme Court following an appeal by the state, legal experts say by pushing against bail, Mr Museveni is preparing for any eventuality.
“This is just about politics, not the law,” the lawyer said. “He likes civilians, more so politicians, being tried at the Court Martial. Now that he is not so sure about it, he goes after bail.”

Mr Wandera Ogalo, one of the lawyers who represented the PRA suspects at the East African Court of Justice, agrees that the push against bail is everything to do with politics.
“Ugandan governments since colonial time have refused to adhere to the rule of law and they keep on repeating the some thing,” a veteran lawyer said.
“Rules governing bail are very clear but those in government want to bring up this issue over and over again because they want to keep opponents in jail.”