Succession. Tanzania’s Samia Suluhu Hassan was last week sworn in as the country’s first female president after the sudden death of John Magufuli from an illness shrouded in mystery. Given the short interlude between the death and the swearing-in, it would appear that there was no succession struggle, a breakaway from turbulent successions usually witnessed in this part of the world.

Ms Samia Suluhu Hassan was nine days ago sworn in as president of Tanzania to complete the term of office of John Pombe Magufuli, who succumbed to heart complications two days before. Ms Hassan becomes Tanzania’s first female president.
Given the short interlude between the death and the swearing-in, it would appear that there was no succession struggle.

If there was any, it never came to the fore. But the BBC had in its pidgin edition reported in the story ‘John Magufuli dead: Samia Suluhu Hassan go be di first female president for Tanzania’ reported that whereas Section 37(5) of the constitution provides that, “Where  the  Office  of  President  becomes  vacant  by  reason  of  death, resignation, loss  of  electoral  qualifications or inability to perform his functions due to physical infirmity, or failure to discharge the duties and functions of the Office of President,  then  the  vice president shall be sworn in and become the president for the unexpired period of the term of five years,” some supporter of the late president and some Christian nationalists had been opposed to Ms Hassan being sworn in as president.

If that was the case, the Tanzanians handled the infighting so well that it never played out in the public. The question now is whether Uganda can in the event of the death of its sitting President have a peaceful transfer of power.
Mr Richard Todwong, the deputy secretary general of the ruling National Resistance Movement (NRM) party, believes it is possible.

“There is a lot of discipline in the NRM. The system and the organisation are very strong. I do not think there can ever be chaos in the unfortunate event that the President either dies or is incapacitated,” Mr Todwong says.
However, the spokesperson of the Democratic Party (DP), Mr Opio Okoler, does not believe that a peaceful handover is possible at this point in time and blames the situation on Mr Museveni, who he accuses of failure to build institutions and tinkering with the Constitution to keep himself in power.

“We have not been able to build the structures and institutions to sustain a peaceful transfer of power and I think it is deliberate. Mr Museveni only appoints people to positions in his Cabinet in order to make himself stronger. We, therefore, have a weak Vice President who would not be able to take charge in case anything were to happen to the President,” Mr Okoler argues.

Fears
Fears that there could be violence in case President Museveni is incapacitated are not new.
Article 109(1) of the Constitution says, “If the President dies, resigns or is removed from office under this Constitution, the Vice President shall assume the Office of the President until fresh elections are held and the elected president assumes office…”

Mr Museveni in an April 2012 address to members of the NRM’s national executive committee (NEC) alluded to that provision and said his Vice President, Mr Edward Kiwanuka Ssekandi, would steer Uganda to the elections period if he were to die.
“…and in case I don’t die, then I will continue being President until 2016, the year for elections when we can start talking about the candidate as a party,” Mr Museveni was quoted to have told the NEC members.

That provision of the Constitution and Mr Museveni’s statement notwithstanding, calls for President Museveni to name a successor have not gone away.
In July 2017, as the scheme that led to the eventual amendment in December 2017 of the Constitution to scrap Article 102(b) and remove the lower and upper age limits for the president were being mooted, calls for Mr Museveni and the NRM to name a successor were renewed.

One of the most vocal proponents of such a move was the Senior Presidential Advisor on the media, Mr John Nagenda, who in an interview with Sunday Monitor argued that history had proved that nations with strong leaders have always been plunged into anarchy and lawlessness when the leaders depart without resolving the succession question.
Uganda, he argued, was likely to suffer a similar fate. He said in the event that Mr Museveni unfortunately passed on, there would be a power vacuum which would precipitate turmoil and in turn reverse the gains that Uganda has made since 1986.

“We have got to find somebody, the State has got to find somebody who will succeed Museveni because even if he hasn’t already succeeded (him), it will mean that many people would have heard it and maybe they will be ashamed to start killing or whatever it is,” Mr Nagenda argued back then.
Prof Sabiti Makara, who teaches Political Science at Makerere University, seems inclined to believe Mr Nagenda’s argument.

“There might be some chaos (in the event that Mr Museveni dies in office). The army here is very influential in the politics. So despite what the Constitution says, it might move in to determine which way the country goes, but no one knows which way it (army) will go,” Prof Makara argues.
There have, of course, been cases of quiet successions. Joseph Kabila’s rise to the Democratic Republic of Congo (DRC) presidency after the assassination of his father, Laurent-Desire Kabila, on January 16, 2001, passed without any talk of infighting. He was handpicked by his father’s inner circle to succeed the older Kabila.

Turbulent successions
However, the case of DRC was the exception rather than the norm. If it is true that there was an attempt to keep Samia Suluhu Hassan out, it would only have been following a trend that has been happening so often when a president dies in office, beginning with Kenya in 1978. And sons of sitting presidents have in most of the cases been at the centre of the succession fights.

Kenya
In the years preceding the death of Kenya’s first president, Jomo Kenyatta, on August 22, 1978, frantic efforts were made by several politicians to avert the possibility of the vice president of 11 years, Daniel arap Moi, from succeeding the ailing president.
Several “change the constitution” rallies were held in diverse parts of the country. It was only after attorney general Charles Njonjo warned that it was treasonous for one to imagine the death of the president that the “change the constitution” group backed down. Moi took office and led Kenya for 24 years. 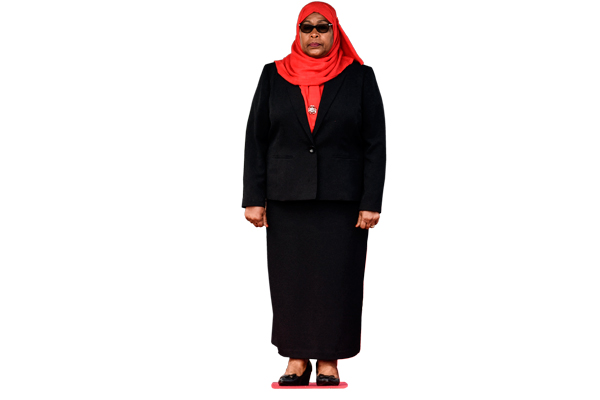 Ivory Coast
Following the death of long-time president Félix Houphouët-Boigny on December 7, 1993, the president of the National Assembly, Mr Aimé Henri Konan Bédié, went to state television to announce the death of the president and also declare that he was assuming the presidency in line with the provisions of the constitution.

Article 11 of the Ivoirian constitution provides that if the presidency is vacated in the event of death, resignation or incapacitation, the president of the National Assembly provisionally assumes the functions of the president pending the organisation of elections within at least 45 days, but not more than 60 days.
That provision notwithstanding, the prime minister, Mr Alassane Ouattara, put up a fight for the seat. Ouattara lost. Bédié, served as acting president for the balance of what had been meant to be Houphouët-Boigny’s seventh term.

Togo
Following the death of long-time ruler Gnassingbé Eyadéma in February 2005, the military named his son, Faure Essozimna Gnassingbé, as his successor. The constitution of Togo provides that the speaker of the National Assembly takes charge in such an event. The military chose first to conceal news of the death of the older Eyadéma and hastily organised a foreign trip for the speaker before installing Faure.

The move was, however, met with both local and international condemnation as a coup. The young Eyadéma was forced to step down.
He agreed to an election, which he easily won in April and was installed as president on May 4, but violent opposition protests broke out across the country amid claims that the poll had been stolen. Hundreds of Togolese were left dead or injured. Others fled the country for fear of reprisals.

Gabon
Ali Bongo rose to the presidency in Gabon in 2009 following the death of president Omar Bongo, who had presided over the country for 42 years. His mandate to preside over the matters of state got an endorsement by way of an election victory later that year, but the declaration of the electoral victory was greeted with mass protests amid opposition claims that the poll had been stolen. Scores were left dead or injured.

Museveni in Boigny’s position?
Mr Okoler says it is still possible to have a peaceful transfer of power, but hastens to add that it will be dependent on how Mr Museveni chooses to handle the question.
“If he chooses to die in office, we shall not see a peaceful transfer of power. But if he steps aside, it will give an opportunity for such an event to take place,” Mr Okoler argues.

Mr Museveni might just be in a situation such as the one in which the late president of Ivory Coast, Felix Houpheouet Boigny, found himself in.
By mid-1988 he was under pressure to name a successor even when the constitution provided that the president of the parliament would take charge in the event of the death of the president.

It was believed that Boigny was reluctant to move in that direction because party loyalty would be split between his anointed successor and others who had ambitions to take over from him, which would in turn cause his own power base to shrink.
Boigny also feared that the heir apparent would also be a target of all manner of attacks. Boigny who believed that the Ivorian polity was mature enough to pursue its own interests left the matter of his succession be determined by the politics.
Mr Todwong, however, insists that the NRM is not deliberately avoiding discussions on the succession question.

“We are not afraid of discussing it (succession). We shall discuss it at the right time. The president has just been re-elected and we are looking forward to formation of the next government. There is no situation that warrants such a discussion,” Mr Todwong argues.
One can only pray that Mr Todwong’s reading of the situation is right.