Aswa County Member of Parliament (MP) Ronald Reagan Okumu has said he does not have the energy and time to challenge the outcome of the January 14 elections in which he emerged fourth.
Mr Okumu, who has been in Parliament since 1996, polled less than 2,200 votes in the contest that was won by NRM’s Simon Wokorach with more than 14,000 votes.
Speaking to Sunday Monitor, Mr Okumu said much as he has evidence to prove irregularities in the polls, going to court would simply drain him and affect his health.

“My team and I have a lot of evidence to prove to EC and court that the election was never fair. But unfortunately, I am not challenging the results for fear of things that will stress and weaken me further,” Mr Okumu says.
Mr Okumu gives the example of the 2016 general election in which his victory was challenged in court by Forum for Democratic Change (FDC) party candidate Christopher Acire. He says the court process left him stressed and weak even when he won the case.

Mr Okumu, who contested as an Independent candidate in 2016, won the Aswa County race having obtained 16,859 votes against Mr Achire’s 5,316 votes.
According to him, the 2021 polls were marred by voter bribery, intimidation and rigging unlike the past elections.
He gives an example of Uwalo and Kiteng polling stations where voting materials were delivered beyond 2pm. He says the ballot papers and biometric machines were deliberately swapped and it took more than two hours to fix the anomalies.

“Many of our people had waited to vote in vain and returned home. In the afternoon, NRM carried voters using vehicles and motorcycles upon paying them money in the night, this was the case of many polling stations,” Mr Okumu claims.
He believes that if such schemes weren’t plotted, he would have been successfully re-elected.
“My car was blocked near Cwero Centre and I was held at gun-point by soldiers at 8pm on the eve of elections while I distributed appointment letters for my agents. Later when I manoeuvred, I found NRM agents distributing money door to door,” he alleges. 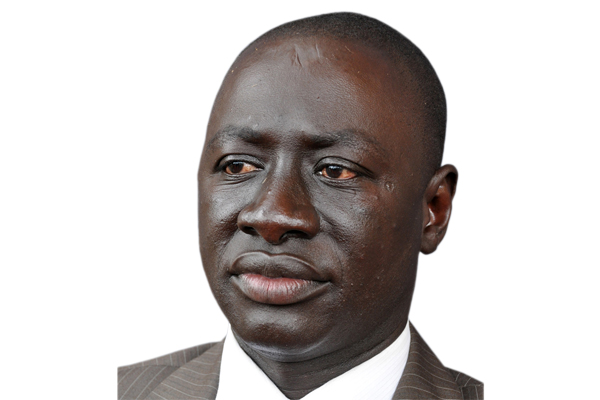 In one of his campaigns, Mr Okumu argued that he was an asset to the Acholi people and that it was necessary to continue serving Acholi people whose voices have always been ignored by the NRM government.
Mr Okumu is one of the 12 lawmakers in Acholi sub-region who lost in the January polls. The others include Aruu County MP Samuel Odonga Otto, Agago North MP Moris Ogenga-Latigo and Kitgum Municipality MP Beatrice Anywar.
Prof Ogenga-Latigo beat his NRM rival Amos Okot in 2016 with 3,659 votes after he polled 14,079 votes. However, in last month’s polls, Mr Okot beat Prof Ogenga-Latigo by a 2,731 margin after polling 13,612 votes.

Mr Okumu, Ms Anywar, Prof Latigo and Mr Odonga, then loyalists of FDC, now overtaken by NUP as the leading Opposition party, were critics of President Museveni and his NRM government in 2001 and 2006 respectively.
Seeking a fifth term, Ms Anywar, whose fame can be traced to her efforts to fight environmental crime, specifically the intended Mabira Forest give-away, was floored by FDC’s Oneka Lit who polled 3,263 against Ms Anywar’s 3,052 votes.
Mr Okumu has been Aswa County MP for five terms, since first being elected in 1996. When the newly elected legislators take oath in May, Mr Okumu will have clocked 25 years as a Member of Parliament.
Mr Okumu, formerly an investigating officer with the Inspectorate of Government, was first elected as MP at the age of 27.

Whereas Prof Ogenga-Latigo’s 15 years as MP have been interrupted following defeat in the 2011 elections to Mr Okot, Mr Latigo, Mr Odonga, Mr Okumu, Mr Olanya, Mr Hillary Onek (Lamwo County) and Ms Anywar stand out for having been continuously elected since they first got to Parliament.
Only Mr Jacob Oulanyah (15 years, Omoro County), Mr Olanya (10 years) and the unopposed Onek (20 years) remain the longest-serving legislators to make their way back to Parliament.

Earlier, the Electoral Commission (EC) declared Mr Onek, also the Relief and Disaster Preparedness minister, unopposed for the Palabek County parliamentary seat after his rival Walter Ocira was declared bankrupt by court after failing to settle his creditor’s nearly Shs1b.
FDC’s Patrick Lakidi had dropped out of the race before the EC declaration, citing neglect by his party. As a result, EC chairperson Simon Byabakama directed the Lamwo District registrar to declare Onek unopposed.

Contested results
During the Lord’s Resistance Army war, the Acholi voted against NRM and its presidential candidate Yoweri Museveni. However, the tide changed after the guns went silent approximately 14 years ago.
NRM party vice chairman for northern region Jacob Oulanyah explained in an interview that facilitating and empowering the party structures at the grassroots were agreed as a solution by the party’s central executive committee (CEC) to rid Acholi sub-region of Opposition monopoly.

“All party resources were sent through these structures. The least village in the country got Shs300,000. Besides money, we also provided each of these agents with bicycles, motorcycles that greatly motivated them to work and that is how we penetrated,” Mr Oulanyah says.
He notes that whereas NRM would carry sacks of money to distribute in the region, it did not create any impact since few party officials ended up embezzling it before it reached the grassroots.

“We got rid of that and ensured all our agents up to the village level were facilitated directly and they were able to pass our message,” he adds.
In Mr Onek’s view, NRM’s strategy was based on extensive sensitisation conducted by the party in order to inform voters of a legislator’s role.
“In Acholi, especially places like Agago and Pader, voters were able to see the capability of the candidates and how much each of them represented the people and solicited development for the people instead of emotive votes that were propelled by propagandists,” Mr Onek says.

Mr Oulanyah says breeding a set of new and young legislators in the region who are capable of soliciting development from the government instead of fighting and opposing it every time was their target, irrespective of political parties.
Although Mr Okumu disagrees with Mr Oulanyah’s notion that the NRM party has gained political control of Acholi, he admits that wrangles currently existing in Opposition camps weakened them.

“I want to strongly disagree with Deputy Speaker (Oulanyah), the NRM party has never won in Acholi if not for the bribery and intimidation they exercised on voters this time. They also simply took advantage of the messes that both FDC and Nobert Mao’s DP are currently submerged into,” Okumu says.
It is not only Mr Okumu who does not agree with the outcome of the results. In a widely circulated video recording, Mr Odonga Otto is seen saying he was preparing to challenge the outcome of the results, citing brutality, intimidation and flawed nomination procedure of his opponent and winner, Mr Christopher Komakech, an Independent candidate.
“Let’s give time to those elected to lead us and those of us (who failed). But so many bad things happened in Pader, we shall settle it in court. My vehicle and a set of public address systems have since December been detained at Pader CPS [central police station] on orders of Gen Paul Lokech,” he claims.

In a letter to the EC dated February 1, Mr Otto’s lawyers are challenging Mr Komakech’s victory on grounds that he was irregularly nominated.
The lawyers allege that Mr Komakech did not resign from Butabika hospital where he worked and that he continued to receive salaries and allowances from the ministry even while he campaigned.
“The law required that all those running for parliamentary elections ought to have resigned from public office by July 12, 2020. But Mr Komakech did not submit the requisite resignation papers at the time of his nominations,” the letter reads in part.

Such anomalies, the lawyers argue, rendered the alleged nomination of Mr Komakech void and incurably defective.
They also claim that Mr Komakech continued to receive salary and allowances from the Consolidated Fund until October 2020. In August, he reportedly received Shs700,122, September Shs700,122 and October Shs100,000, all received on his ABSA bank account.
The Electoral Commission guidelines issued for nomination of Members of Parliament, dated June 16, 2020, provided that a person shall not be regarded as duly nominated if the requirement for resignation from public office within the prescribed timeline by law is not complied with before nomination day.

Mr Odonga Otto lost the bid to retain the Aruu County parliamentary seat for the fifth term to Mr Christopher Komakech, an Independent candidate who scored 9,327 votes against Mr Odonga’s 5,953.
During the 2016 general election, Mr Odonga Otto beat his NRM rival James Navinson Kidega when he scored 14,216 votes against Kidega’s 12,653 in the disputed election. 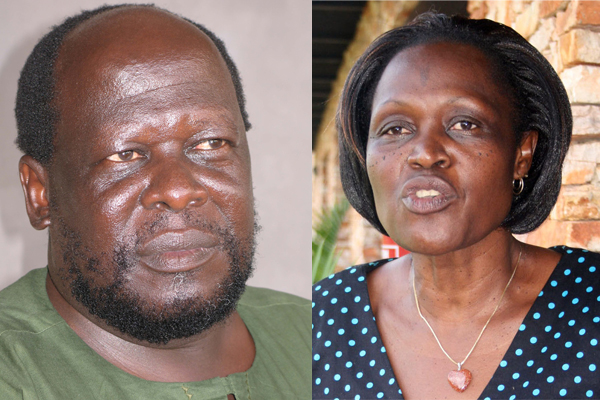 Voters speak out
Voters who spoke to Sunday Monitor believe the entry of new faces is a reflection of the people’s interest, and has nothing to do with the quality of their legislation.
Mr Remijo Olaka, the Corner Kilak LC1 chairman in Pader District, says since President Museveni’s pledges and successes were tangible, it was time to front candidates that valued the voters’ interests and could lobby for more development from the government.
“Our MPs including Mr Odonga Otto never appreciated or valued our priorities for decades. They have been in Parliament, but fighting for their interest,” Mr Olaka says.

Mr Olaka also believes Mr Otto’s personality contributed to his downfall. Mr Otto openly attacked his fellow legislators Reagan Okumu, Anthony Akol and the former curate of Holy Rosary Parish, Gulu Archdiocese in June 2020, but the resulting tension was calmed by Archbishop John Baptist Odama.
But Mr Alfred Okwonga, the Gulu City mayor-elect, believes that it was time for fresh faces in the region.
“The personalities our people chose to send to Parliament this time are of great quality, young and vibrant leaders who are flexible, versatile and have been on the ground with the people to appreciate their issues and challenges,” Mr Okwonga says.

Mr Okwonga, however, attributes the downfall of long-serving MPs to the unfulfilled promises and the scientific campaigns adopted by the government which enabled candidates to reach every constituent.
“Unlike the past campaigns where voters were gathered in a few specific spots, every candidate reached every voter unless otherwise, and that gave voters time to judge who to vote based on their manifestos,” Mr Okwonga says.

Mr Robert Ociti, a resident of Bardege parish in Gulu City, says the new and young faces voted for in Parliament should not come as surprise, but remind leaders in elective oppositions of the social roles and proper representation.
“For our case in Gulu West, incumbent Lyandro Komakech wouldn’t have lost to Mr Martin Ojara Mapenduzi if only he valued his social roles among his people. It is not just about debating in Parliament, but being physically present for the people and listening to their issues,” he says.
“Many of our MPs who have served for long forgot that they had outlived their usefulness in Parliament and simply needed to come up with ideas that tangibly change the lives of the people.”

Mr Raymond Opira, a resident of Central Ward in Kitgum Municipality, says Ms Anywar’s downfall resulted from her switch to NRM after ditching FDC hardly two years ago.
“She could not save herself after that mistake which we took for a betrayal. Besides, she no longer respected other leaders in the area since she enjoyed so much powers and closeness to President Museveni the moment she was appointed junior Environment minister,” Mr Opira says.
Another blow that cost Ms Anywar her seat was the decision to vote in favour of removal of the controversial presidential age limit Bill against the will of her people in Kitgum District, Mr Opira adds.