Half season report. The first phase of the 2020/21 StarTimes Uganda Premier League came to an end on Thursday. The goals were in full supply in the 120 games, with central defender Hassan Mohammed stealing the show with a hat trick.

Advertisement
By Fred Mwambu
More by this Author

There was a sense that more games would be beamed by league sponsors StarTimes, especially with the clubs bereft of the meagre finances they used to earn from gate collection as Covid-19 protocols ensured that even the 200 limited fans approved were inconsistent.
But that was not the case as the league broadcaster and main sponsors managed to beam only 37 out of the 120 games so far (about 30.8 per cent).

Uganda Premier League chief executive Bernard Bainamani says the target was to air 130 games throughout the season in two equal phases – 65 per round. But the current figure is less by 28.

Of the 37 games broadcast live, Vipers enjoyed the lion’s share as has been the norm throughout the three seasons StarTimes has been around.
The Venoms have appeared on TV 10 times, Express nine times, KCCA, SC Villa and Mbarara City have been shown eight times, while table leaders URA have only been live four times.

Bul, UPDF, Kyetume and Bright Stars have been broadcast only once!
“We intended to have each team on air at least six times in the season but as you have pointed out, some have enjoyed a bigger share,” Bainamani said of the glaring disparity in the league coverage.
“We’ll look into it with the broadcaster and find ways to compensate the teams that haven’t received enough coverage in the second round.”

To-date, StarTimes have aired 182 matches out of the 600 played under its sponsorship that is into the third year.
Rage over lunchtime kick-off
On February 12, UPL announced three fixtures involving Vipers that had been adjusted from the initial 3pm kick-off to 1pm under extreme weather conditions. Onduparaka-Vipers, Mbarara City-Vipers and URA-Vipers matches were rearranged per a request from StarTimes.

It was later revealed that the broadcaster’s main reason to alter the fixtures was that they were clashing with several other English Premier League matches.
This drew the wrath of UPL fans and stakeholders who wondered if the UPL is “the only league that matters.”
There were also some midweek double-headers at Njeru, like that involving Kyetume and Busoga United, that were scheduled for lunchtime but StarTimes failed to broadcast them, further beating the purpose of scheduling them under the scotching sun.

Raining goals
This season has been explosive with goals raining regularly from the onset. So far, the nets have shaken 328 times. At this same stage in the past two seasons – 2018/19 and 2019/20 – there were 265 and 278 goals scored.
KCCA and Vipers’ attack lines lead the assault with 38 and 33 goals scored while Kitara and Myda defences have shipped in the most – 42 and 44 – respectively.
URA’s Steven Mukwala tops the scorer’s chart with nine goals, one more than Police’s Brian Mululi. KCCA duo of Brian Aheebwa and Charles Lwanga, and Onduparaka’s Livin Kabon all have seven.

Kcca’s 8-0 hammering of Onduparaka and Vipers 7-0 of Myda are the biggest win margins so far. In all, 83 wins and 31 draws have been registered.
URA, with 11, have the most wins while Myda have one each. Wakiso Giants are the draw masters with 10 so far, equalling last season’s highest by URA. Maroons’ count of 19 in the 2017/18 season remains the highest in the new UPL era. 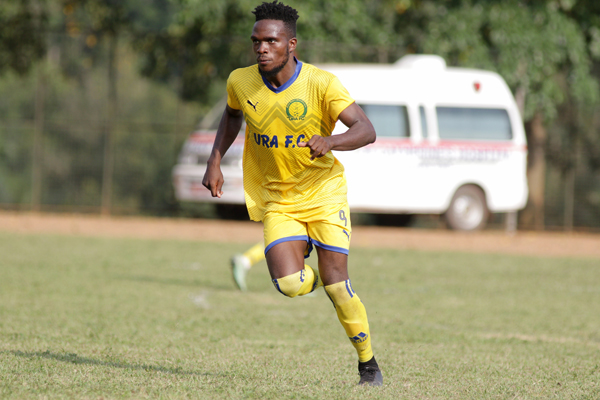 Action, attraction. Mukwala has carried his league from last season into this campaign.

Express’ resurgence
Wasswa Bbosa joined Express toward the end of last season on interim basis to save the team from relegation. However, his full appointment and quiet behind-the-scene activities saw the coach assemble a formidable squad that is already challenging for the holy grail.
The acquisition of Cranes defender Murushid Juuko has created a strong wall at the back – his partnership with Enock Walusimbi, Issa Lumu and Sadiq Ssekyembe who sometimes interchanges with Arthur Kiggundu in front of Mathias Muwanga – leaking only seven goals – the least in the division.

Bbosa has organised the Red Eagles claws with George Ssenkaaba (six goals), Godfrey Lwesibawa (five goals), Frank Kalanda (four goals) and Eric Kambale (three goals) all answering when called upon.
To be the best, you must beat or at least match the best. Bbosa has ably done that. The Eagles have clawed results from six of the seven teams in the top eight.
These included a win over SC Villa in the derby, single goal victories over table-toppers URA and Police, plus 1-all draws against Vipers and KCCA.

URA dark horses mean business
Kcca and holders Vipers have dominated and interchanged the league trophy among themselves over the last eight seasons. However, this season has five teams posing a serious challenge.
Sam Ssimbwa, a bridesmaid with the Tax Collectors in the last two seasons, is in for the title battle and is leaving nothing to chance. His Tax Collectors crawled into the season with two draws before steadily rising on their way to brushing aside KCCA, UPDF, Police and Vipers to top the league.

The impact of Saidi Kyeyune’s loss to El Merrikh was mollified by the ascent in form of steely pair of Benjamin Nyakojo and Hudu Mulyiki and the return of Shafiq Kagimu from injury.
Police and Updf, coached by Abdallah Mubiru and Kefa Kisala, wear the dark horses’ mask with their surprise form.

Onduparaka, Vipers pull sponsors
Despite the effects of the Covid-19 pandemic on the economy, Vipers and Onduparaka managed to convince Plascon Paints and Ababet to inject a combined tune of over Shs1b in their accounts.

Onduparaka unveiled Ababet as their new shirt sponsor on February 4 in a deal worth Shs625m for three years.
Ababet became the headline sponsors both on the team’s shirt and their Greenlight Stadium. The deal was unveiled just days after extending their undisclosed sponsorship with MTN by a year.
Vipers added Plascon to their list of sponsors in a deal worth Shs400m for two years. The paints company now advertise on the team’s shirt sleeve, adding to Hima Cement and dfcu.

Breach of Covid-19 rules
Fufa, following the government guidelines, allowed a maximum of 200 fans for each match. However, these rules have been grossly flouted.

Most clubs failed to ensure the basic Standard Operating Procedures like washing hands, social distancing and wearing of masks are observed. The punishment; KCCA, Kyetume, Busoga United, Mbarara City, and Onduparaka have been forced to play without fans.
There has also been confusion on fans are admissible. Fufa first emphasised season ticket holders, but that was a big ask since most clubs don’t have that option. The second was for clubs to write to the federation for permission and selling of tickets before matchday but some have neglected this.

Fixture congestion
The first phase of the first round before Chan break was played between December 3 and 20, then resumed on February 12 to March 18. That is 35 days; 15 matches per team, – a match every three days.
This has not gone well with the coaches, who say the congestion drains their players and affects match preparations.

“I think they might have to reconsider the way they [UPL] organise the fixtures. As much as they have timelines, we must think about the health of the players because they’re not machines,” said Kisala, whose team topped in the first five matches before plunging to sixth.

Newly-appointed Kyetume coach Alex Isabirye adds: “We don’t have time to train and plan games tactically because you’ve only two days between matches; you’ve to ensure the players rest and before you know it, they’re on the road for the next game, this has to change.”
Bainamani says the fixture was designed to cover the time lost to Covid-19.

The ugly | Men in black on the spot

Unlike the first five rounds before the Chan-induced break, the referees came under intense scrutiny in the last 10 rounds.
Police chairman Asan Kasingye was slapped with a Shs2.5m fine and issued with a stern warning by Fufa following a barrage of attacks on Twitter after an ugly incident that saw his team’s goalkeeper Derrick Ochan wrongly sent off during their 3-2 loss to Vipers at Kitende.

“Corruption in football has gone beyond. Vipers, together with your hired refs, shame on you,” Kasingye, who invaded the touchline to protest during the game, later tweeted.
The referee’s disciplinary panel later rescinded the red card and banned the third assistant Juma Osire for a month.
Kasinye’s Wakiso Giants counterpart Musa Atagenda refrained himself from attacking the officials in their away fixture against Kitara at Kavumba for similar reasons.
“For the good of the game, I have left the pitch in the 60th minute. Otherwise, if I had stayed longer, I would have done worse than Afande K[asingye] did at Kitende,” he posted.

Wakiso coach Douglas Bamweyana was sent off by the referee Ahmed Kakembo for protesting decisions. The referee’s body later ruled in his favour and overturned the card.
Express’ Wasswa Bbosa was also not spared the rod following his comments on Isa Masembe’s level of officiating in their 1-all draw with Vipers at Wankulukuku. He was fined Shs2m. 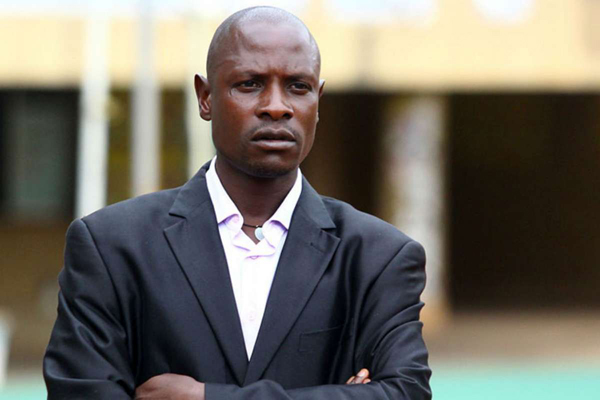 Whereas there has been a healthy competition at the top of the table, there has been a sense of innertness at the tail end. Debutants Myda and Kitara are quietly languishing at the foot being the only ones yet to hit double figures in points.

With 17 and 16 goals scored, the two sides could have just be sitting slightly above the red line but their porous and awful defence has seen them ship over 40 goals each and sink them deeper into the mire.
Myda’s sponsors are said to be cash-strapped, no wonder in their match against Wakiso Giants last week, they arrived at the venue past the kick-off time with exactly 11 players.

National teams prey on coaches
The debate on whether national team coaches should continue doubling at their clubs resurfaced again in the first round when several head coaches in the UPL, including Arthur Kyesimira (Bul), Abdallah Mubiru (Police), Livingstone Mbabazi (Kyetume) and Brian Ssenyondo (Mbarara City) absconded club duty over national team roles.
Ssenyondo’s absence grossly affected the Ankole Lions, forcing them to replace him with Livingstone Mbabazi, who suffered the same fate at Kyetume. The Ankole Lions had gone six games without a win.

“The root cause of the decision by the club management was a prolonged absence from training and matches since he had to juggle the assistant coach roles with the Uganda U-17 national team,” online news Kawowo Sports revealed.
Ssenyondo’s Cubs technical bench counterpart Kyesimira missed his Bul’s team opening fixtures but was forced to excuse himself from further national assignments to concentrate on his club whose fortunes were dwindling.

Fufa stadium in a mess
Njeru’s caved in fence
Fufa’s stadium inspection is always used to ruthlessly deny facilities without perimeter fencing around the pitch from hosting league games.
But such is the sight at the Fufa Technical Centre, Njeru! The fence had already seen enough days and caved in. Fans can leisurely walk into the technical area if they wished.
The outside fencing is not any good. Fans easily breached it during at least two league games.
editorial@ug.nationmedia.com