A student started Hillary Kiiza’s professional teaching journey. Francis Batoora visited his cubicle at Northcote Hall in Makerere University in search of a teacher to coach him.

Kiiza had just completed his teaching practice at Lubiri High School and was pondering his next step. The millet his mother had given him as part of upkeep, was almost over and he did not have any money.

This student provided the opportunity he was looking for because  he was willing to pay for his coaching services. Batoora’s grades improved a great deal which prompted the school administrators of Progressive Secondary School to find out what had helped him academically perform better.

He told them that he was getting coaching from a student teacher at Makerere University. The proprietors of Progressive SS requested to meet Kiiza who was happy to meet them.

In the meeting, they agreed that he would be invited to Progressive Secondary School and as a test, asked to deliver a three-hour lesson before the student community.

After that, he was called into the office of the director, given an appointment letter and money and asked if he could be given a school pick-up truck to collect his belongings from Northcote Hall.

Kiiza had officially earned his first placement to start his teaching professional journey. From the allowances he had received during teaching practice at Lubiri High School, in Kampala, he had bought a bed, dishes and a few other items.

“During the first year I taught at Progressive SS, the students passed very well which confirmed that I was a competent teacher. I was only a graduate, and had never been an examiner, but I knew what was needed. Luckily, I had passed with an upper second degree in 1992,” he recollects.

One of the first students he coached were Caleb Alaka and Erias Lukwago, two of Kampala’s top lawyers. The latter is Kampala’s Lord Mayor. Word had started going around about a young star teacher whose students were scoring highly and passing exams with flying colours.

So, it made sense for students to look for him as a way of brightening their chances to pass Uganda Advanced Certificate Education (UACE). Kiiza taught divinity and history.

Willix Ssemugooma, the then head teacher of Lubiri High School must have heard about Kiiza’s exploits at Progressive SS so in order not to lose him, he processed his confirmation as a full time teacher at Lubiri, intact with a government appointment letter.

“I could not sustain myself on one salary so I kept teaching at Progressive SS until 1995. Then Rubaga Girls School called me to teach their students at night, and because of the proximity between Lubiri and Rubaga Girls, I found myself having no time but disseminating knowledge. I became a city teacher,” Kiiza recollects.

In addition to Progressive SS, Lubiri and Rubaga Girls, more offers came his way to teach in more schools. When Dr. Justus Byamuto, a veterinary doctor, was starting Alliance Secondary School in Nansana, he called on Kiiza to join his initial staff members to give the school a well-grounded academic start.

Meanwhile, the proprietors of Progressive SS had opened another campus in Bweyogerere where Kiiza was asked to teach as well. You could say that Kiiza was a hot academic cake.

At the time, he was motivated to start writing and publishing pamphlets anchored on the spiralling demand  from different schools spread over the city and other parts of Uganda.

In 1993, the teacher applied to do masters of arts in religious studies. He graduated in 1995. On May 5, that year, he started the journey of establishing his own school.

That is how Namirembe Hillside High School came into existence.   Along with his friend and business partne Robert Kyaligonza, then a deputy head teacher at Kampala Secondary School who doubled as literature teacher he joined the world of school proprietors.

“We didn’t need a lot of money. Actually, I remember selling my sofa set chairs. I had also become a writer of books. By 1993 when I taught students and they passed, I decided to document the knowledge and avail it to other students. I consolidated it into pamphlets of Christian Religious Education (CRE) which were selling like hot cake in the city and beyond,” the  elated educationist further recalls. 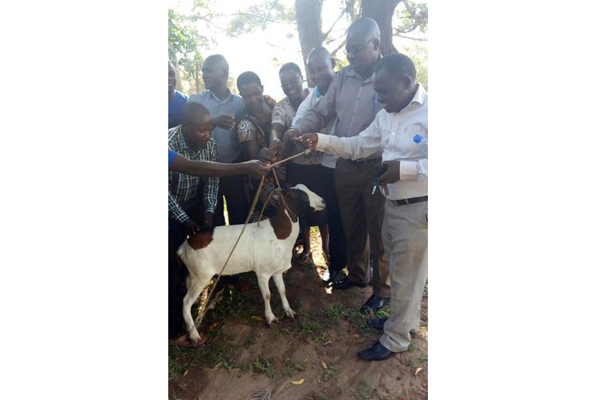 Kiiza (R), staff members of Namirembe Hillside and some students receiving a goat from a former student as a token of appreciation in 2017. PHOTO | COURTESY

That is how they were able to raise capital to start the school. “Some of the students were from the working environment. A case in point was a one Ngabirano who was working in Kampala City Council (KCC) at the time. He was an old man but focused. Some of them were older than me, in age,” he recalls.

He adds: “By then, we had to be harsh in order to get the best results from the students and the best of the quality of men they are today so while you were punishing the student, they were fears that they would answer back with a blow.”

Kiiza is from the crop of teachers who embraced their professions whole-heartedly. As such, he argues that if someone does something and it is appreciated, it is worth  much more than money.

“Recognition of a person is very important as a motivator so that this person encourages others to do the same, in every field of work,” he adds.

Today, he is in a phase of nurturing other teachers to take over the mantle from him. He is doing so tactfully amid the challenges he faces.

The effects of Covid-19 have affected schools and remerging has called for different strategies that can sustain the schools in a time when most parents are financially struggling yet need to send their children to school.

Head teachers  such as Kiiza need to find ways, including taking out loans, in order to sustain the school programmes. Amid it all, the school proprietor says that there is need to motivate more students into the teaching profession.

“What I do is discuss with them and show them avenues of making a living and still remain teachers,” the veteran teacher explains. He is motivated to inspire more people into the profession because there are people who have a low public perception of him, as a teacher.

“Sometime back, before becoming a doctor, other professions would be introduced and people would clap. Whenever they would introduce me as a teacher, I would wait for a single clap from the crowd and nothing would come. At one time, I ended up clapping for myself and then they clapped,” Kiiza light-heartedly recalls.

Their clap was not because they realised he was a great teacher but because of Kiiza comically clapping for himself. The disregard follows him to school where parents, do not appreciate that his efforts that have enabled him to own one of the most respected private schools in Uganda. As such, some think he is only a front for a government official or a rich person. “I can feel the level of disrespect when a parent insults me over small issues. It is mainly city parents whose perception of a teacher remains negative. Sadly, such attitude is sometimes passed onto students. There are teachers who will fail to help students pass simply because they are demoralised, by their attitude” Kiiza observes.

His two pence, is to such parents and the president who has variously undermined the role of arts teachers, to change his attitude and appreciate a teacher for their contribution irrespective of the subject(s) they teach.

Hillary Kiiza started his teaching career in 1992 after university specialising in Christian Religious Education and History.

He founded Namirembe Hillside with Robert Kyaligonza in 1995 but he has insisted on remaining a classroom teacher to keep in touch with his students and experience the challenges of other teachers.

He advocates for an education system that emphasises practical learning.