At least 11 African heads of state arrived in Uganda Tuesday and Wednesday to witness the swearing-in ceremony of President Yoweri Museveni who has been in power since 1986. 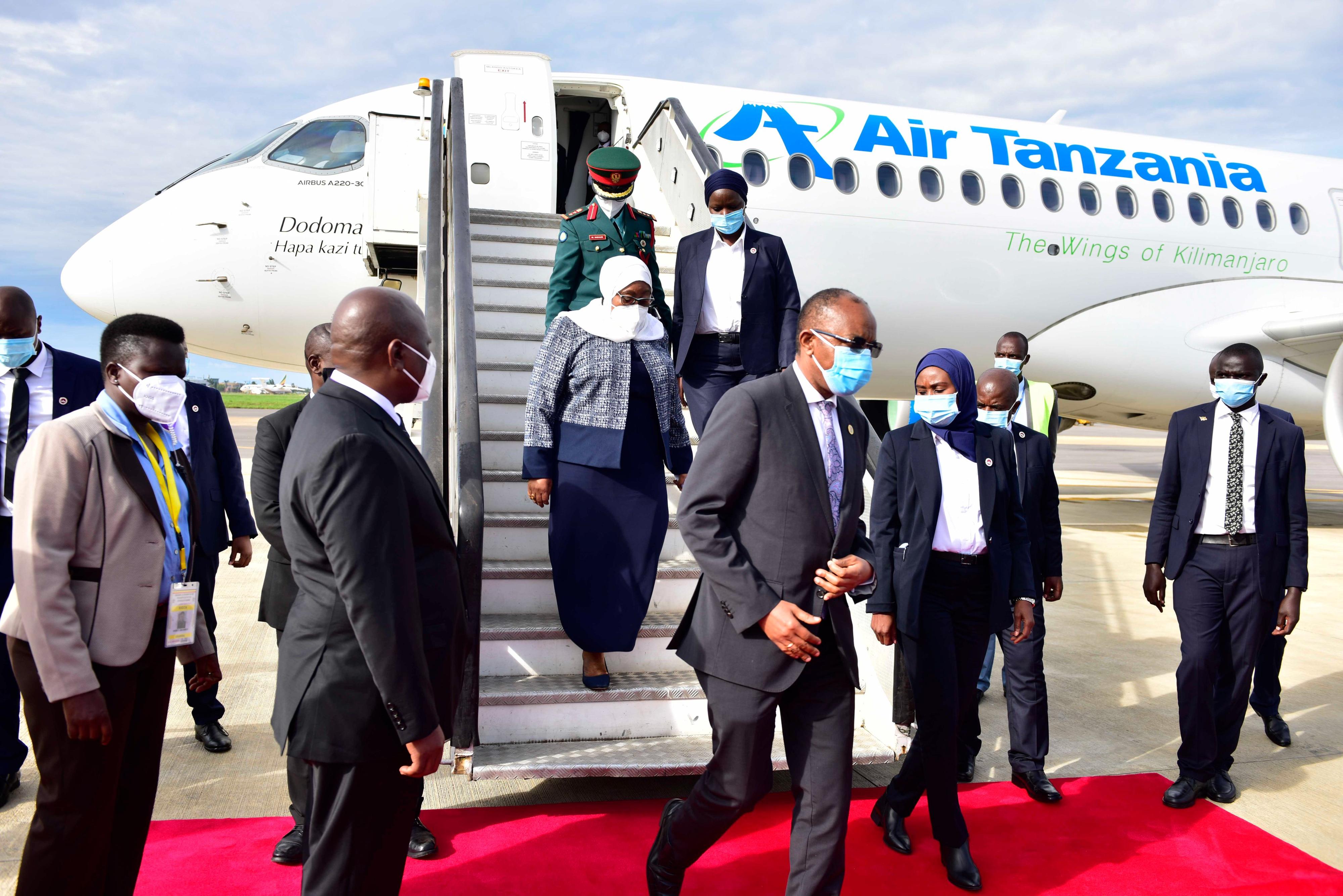 Tanzania president Samia Suluhu Hassan arrives at Entebbe Airport for the swearing-in ceremony of president Museveni on May 12, 2021. PHOTO/ PPU 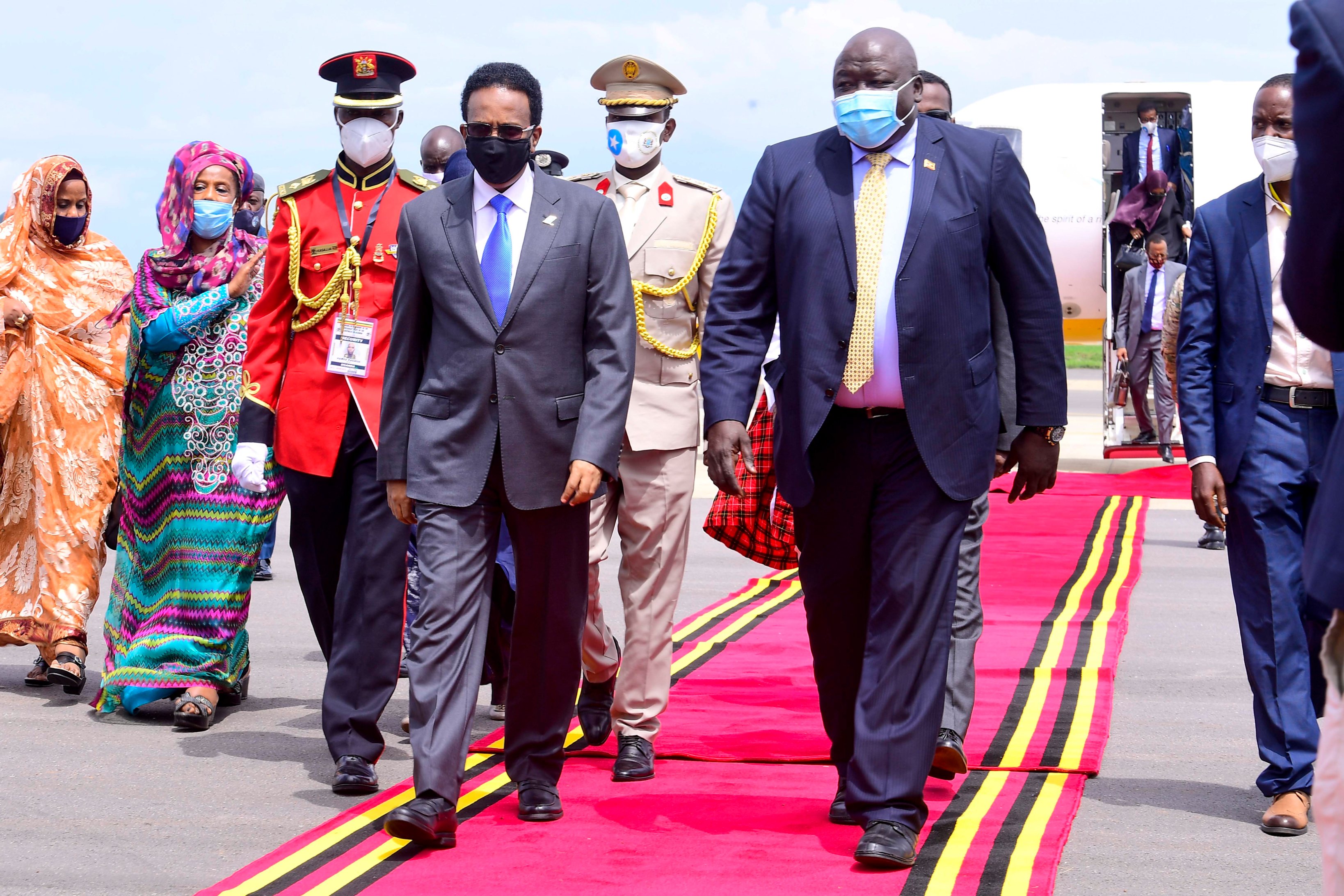 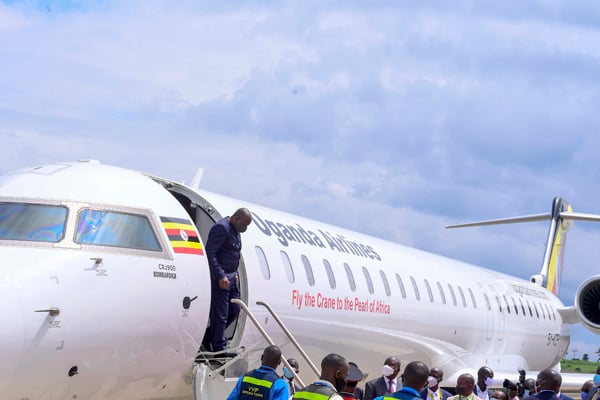 This photo taken on May 11, 2021 shows Burundi President Évariste Ndayishimiye disembarking a Uganda Airlines plane after arriving at Entebbe International Airport ahead of President Museveni’s swearing in ceremony for another five-year term. PHOTOS/ PPU

The presidents were received by Uganda's State Minister for Foreign Affairs, Henry Oryem Okello at Entebbe Airport ahead of President Museveni’s swearing-in ceremony for his sixth-elective term of office at Kololo Independence Grounds.

On Tuesday evening, president Museveni treated his counterparts to a state dinner at Speke Resort Munyonyo.

“Interactions with the different visiting Heads of State before the State Dinner at Speke Resort Munyonyo earlier. On behalf of Ugandans, I am supremely honored to host the different leaders here,” Mr Museveni said.

President Yoweri Museveni and the First Lady Janet Museveni arrive at Speke Resort Munyonyo where they hosted a state dinner for other African heads of state and government representatives on May 11, 2021

Mr Museveni was declared winner of the January elections with 58 per cent of the votes cast while his closest contender, musician turned politician, Mr Robert Kyagulanyi alias Bobi Wine got 35 per cent, according to the Electoral Commission. 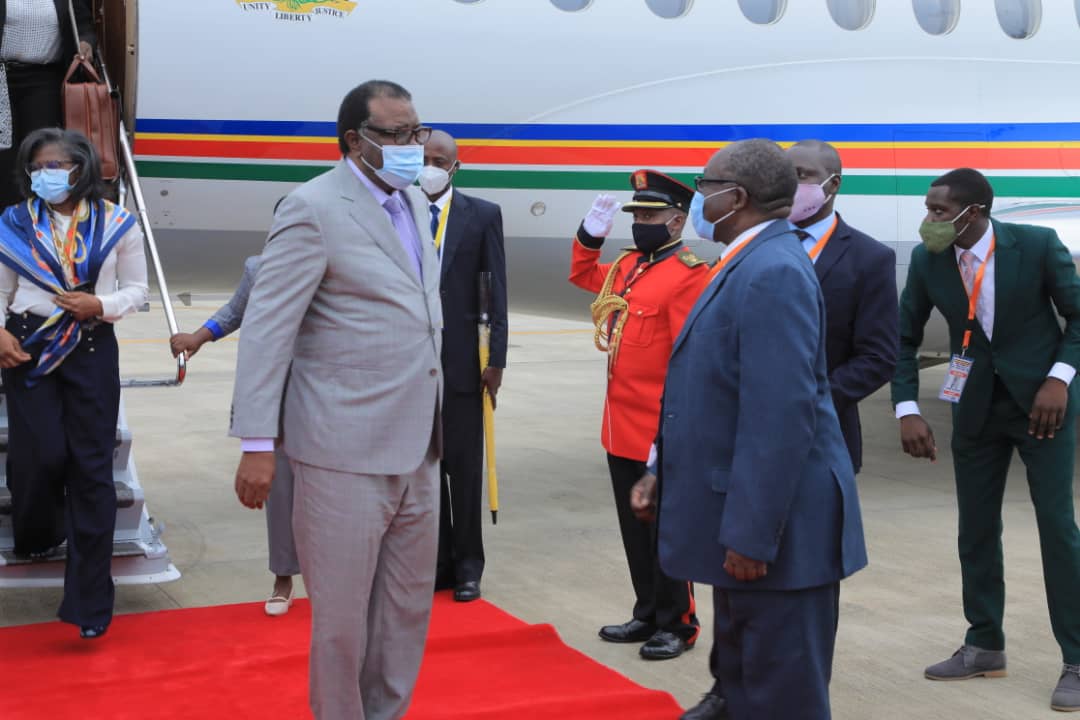 In addition to the six African heads of state already in Uganda, Sudanese vice president, Malik Agar Eyr, South Africa’s minister of international relations and cooperation, Naledi Pandor and the executive secretary of the International Conference on the Great Lakes Region (ICGLR), João Samuel Caholo, arrived in Uganda on Tuesday afternoon to witness the swearing in ceremony of Mr Museveni, 76, slated for Wednesday May 12th. 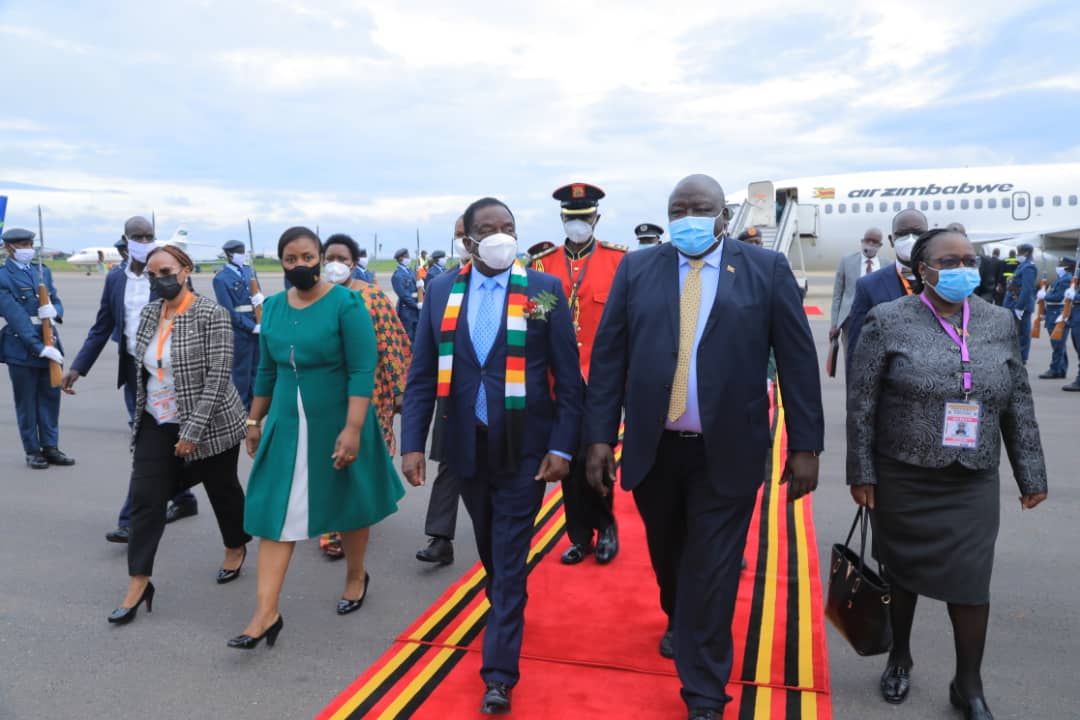 More heads of state and representatives of other governments are among the more than 4,000 guests expected to attend the event which members of Uganda’s Opposition have shunned following what they described as a sham election. 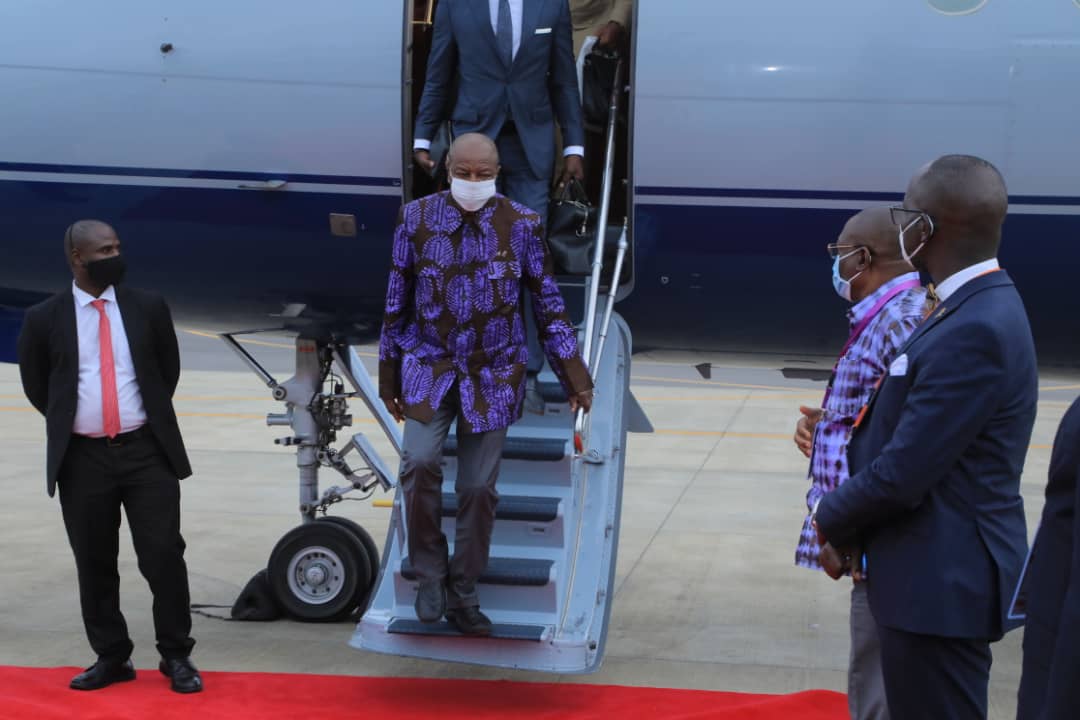 “Foreign “guests” who come to attend such an imposition of a Junta become accomplices to the NRM/Museveni Junta crimes. Lenders to such a regime must know that Ugandans aren’t bound by such debts,” tweeted four-time presidential contender Dr Kizza Besigye who is out of the country. The homes of Dr Besigye and and Bobi Wine are currently surrounded by security operatives as a “preventive measure” following intelligence information that some members of opposition were allegedly planning to disrupt the swearing-in ceremony, according to the UPDF deputy spokesperson, Col Deo Akiiki.

Police and the army also said there was heightened security in Kampala and surrounding areas to contain any criminal activities and to ensure Mr Museveni’s swearing is a success as he embarks on another term to mark four decades in power.

Relatedly, police spokesperson, Mr Fred Enanga said the Force had taken a deliberate decision to enhance their enforcement measures on motorists, outside the essential category, who fail to comply with curfew hours. 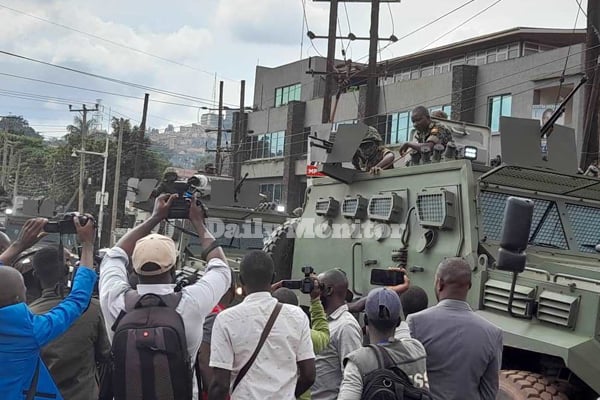 “We are going to impound all motorcycles/boda bodas beyond the 6pm restricted timing, and motor vehicles beyond the 9pm restricted timing.  Additional sanctions will include arrests, fines and penalties irrespective of whether you are a driver, rider, passenger or occupant. In addition, all proprietors of fuel stations who continue to park motor vehicles and motorcycles, will be subjected to further investigations, on parking authorisations, as we arrange to impound all motor vehicles and motorcycles parked at respective fuel stations,” CP Enanga said in a statement issued Tuesday afternoon. 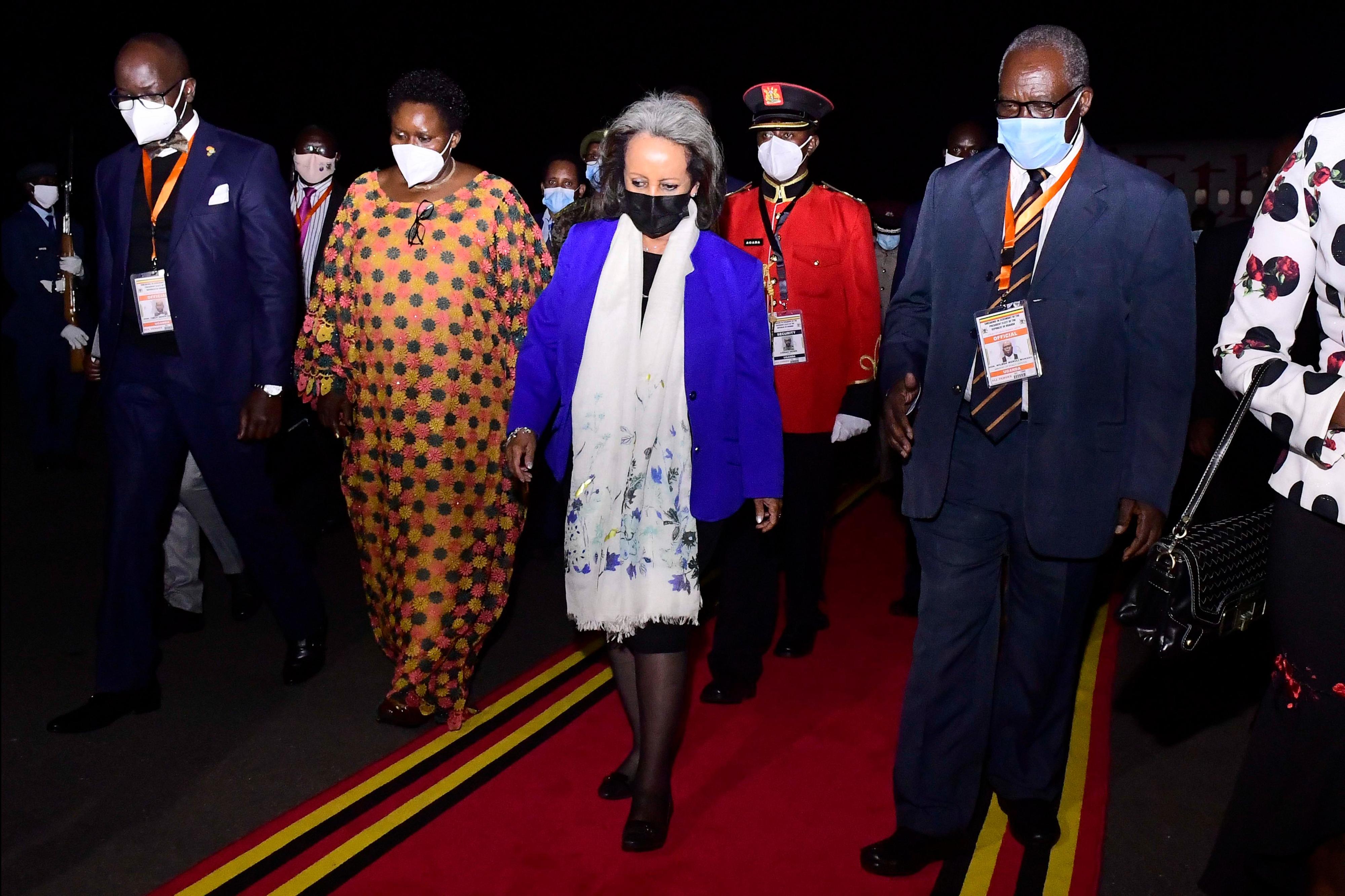 The president of the Federal Republic of Ethiopia, Sahle-Work Zewde arrives in Uganda on May 11, 2021. PHOTO/ PPU

Ghana president Nana Akufo-Addo arrives at Entebbe on May 11, 2021 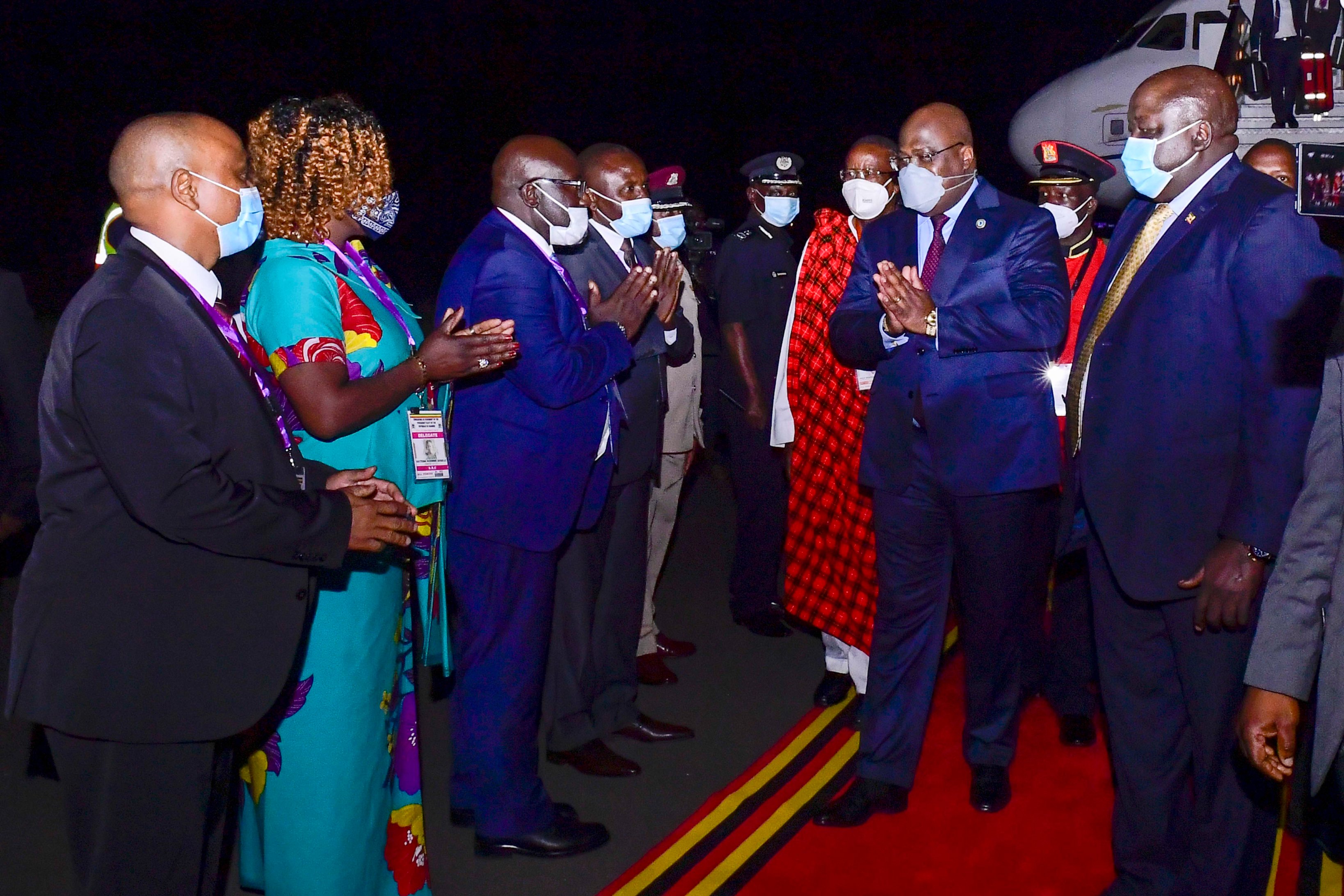 Félix Antoine Tshisekedi Tshilombo, the President of the Democratic Republic of Congo arrives at Entebbe Airport on May 11, 2021 for President Museveni's swearing-in