The death toll from Wednesday’s  protests against the arrest of presidential candidate Robert Kyagulanyi, alias Bobi Wine, has risen to 29.

The National Unity Platform (NUP) flag bearer was arrested on Wednesday in Luuka District while on the campaign trail.

Police and medical sources said most of the deceased died of gunshot wounds and suffocation.

At least 19 people were killed in Kampala Metropolitan Police, which covers  Kampala City, Wakiso and Mukono districts. Police, however, put the official figure at 16. 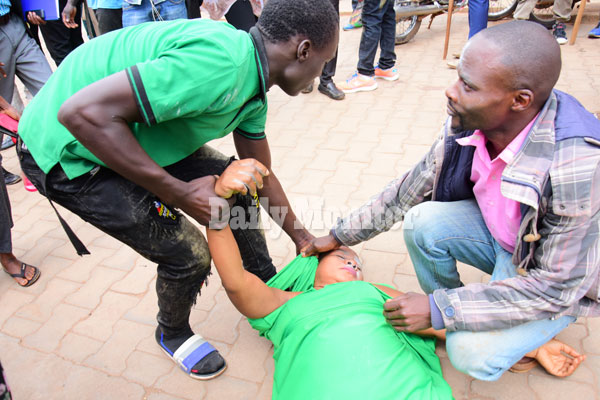 On Wednesday, protests broke out in different parts of the country after Bobi Wine’s arrest on allegations of violating guidelines to contain the spread of coronavirus, which has so far claimed 158 lives in the country.

The death toll is the highest in a protest registered in recent times.

The police were joined in by the regular army, the Military Police and Special Forces Command to quell the protests.

Men dressed in civilian clothes  armed with assault rifles were seen patrolling the city streets and also fired bullets at protesters and anyone who was taking their pictures.

It was not clear which security organisation they were attached to.

Dr Moses Byaruhanga, the director of Police Health Services, who was at Kampala Capital City Mortuary, said since the start of the protests, 65 patients were received and some had serious injuries.

“Out of 19 people who have died, 16 of them died of gunshots wounds. There were also victims of hit and run incidents. Of those with gunshots wounds, 15 were men and one a woman,” Dr Byaruhanga said.

Several grieved people converged at the city morgue to pick the bodies of their loved ones.

Ms Maureen Nakazibwe, a resident of Nansana in Kampala, who lost her husband, Peter Kintu, said he was shot by a Local Defence Force personnel in Kisenyi, Kampala City.

“My brother left in the morning for work, but it is sad that he is now dead,” Mr Kogera said.

In Busoga Sub-region, six people in Jinja City and Iganga District were killed. The victims were either protesters or innocent bystanders.

Two others died in Masaka. One patient, who was on life support at Rahma Medical Centre in Nyendo Township in  Masaka City, suffocated to death after police officers hurled a tear gas canister in the ward while the other was hit by a stray bullet at Kinoni Township, Lwengo District. Mr Muhammad Nsubuga, the police spokesman of Greater Masaka region,  blamed the deaths on protesters, who he said were provoking the security personnel.

Richard Mutyaba, 45, the chairman of Kasaala Village in Luweero District, was shot dead by a soldier in a vehicle.

It is alleged that he was hit by a stray bullet.

In Butambala District, one person only identified as Faizo was shot dead by security personnel as he was walking from his home to a mosque for evening prayers at Kyabadaaza Township on Wednesday.

Ms Lydia Tumushabe, the Katonga Regional Police spokesperson,  said the deceased was hit by a stray bullet as police were chasing protesters.

Tens of other people are still hospitalised with gunshot wounds in different medical centres.

Security agencies responded by firing live bullets and tear gas at them. More arrests were carried out.

Since Wednesday, more than 800 people were arrested and detained countrywide.

Majority of the arrests were carried out in Kampala Metropolitan Police.

Ms Zainabu Angella Ali, the candidate for Moroto Woman MP, was also arrested yesterday and she is still in detention on allegations of inciting violence. The NUP supporters in Moroto District protested the arrest of Bobi Wine before the police quelled them.

According to the new report by Reporters Without Borders, acts of intimidation and violence against journalists are an almost daily occurrence in...

Deby's son named 'president of the republic' of Chad

Relief as part of Shs2b Kamuli office block is completed