This comes barely a day after police said they were investigating an accident that happened yesterday at Mayangayanga on Nagoje Road in Mukono District involving supporters of the MP’s supporters.

ASP Kato was injured on the head and rushed to hospital for treatment.

The Kyadondo East MP said several of his supporters, including his music producer, Dan Magic, had also been injured and admitted to hospital.

“The police and military have attacked us yet again, shot and injured many of my team members and other Ugandans who gathered to wave to me in Kayunga. My friend and producer Dan Magic has been hit in the face! ASP Kato, a police officer attached to me has also been badly injured. Many comrades are gravely injured. Pray for us. Pray for Uganda. We shall overcome!” he said in a statement posted on his social media platforms. 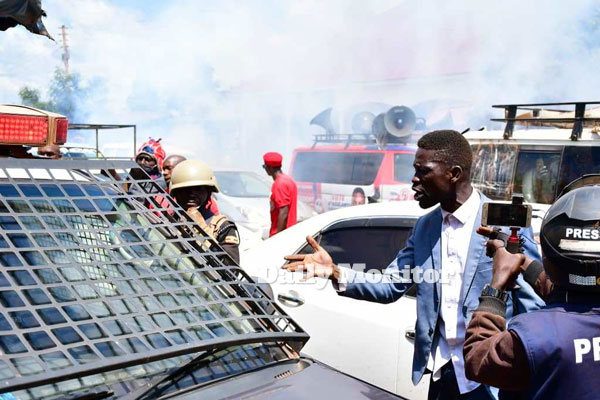 This comes barely a day after police said they were investigating an accident that happened yesterday at Mayangayanga on Nagoje Road in Mukono District involving supporters of the MP’s supporters.

He said one of the motorcycles slid and fell under the police truck that was following behind.

He said one victim was rushed to hospital in serious condition but later died.

He identified the victim as Jonathan Ssempala, a 28-year-old resident of Nakifuma.

In a related development, SP Onyango said five Bobi Wine supporters sustained injuries when the vehicle they were travelling in overturned.

He identified them as Vincent Ssempijja, 18, Moses Ssentongo, 24, Steven Ssebuliba, 30, Robert Kigozi, 22, and Medi Ssebadeki. They are all are residents of Nakifuma, Mukono District.

Ssempijja was admitted to Kawolo Hospital while the others were transferred to Mulago National Referral Hospital.

Residents said the accidents happened as police tried to block Bobi Wine on his way to Buikwe District for a campaign rally.

Ministry plans reopening of schools for all learners

The Ministry of Education is, however, awaiting approval from the Health ministry.

Voters speak on why they kicked out 24 ministers, VP

Opondo slams US envoy over attempted visit to Bobi Wine

More votes than voters in Sembabule