Advertisement
By Anthony Wesaka
More by this Author

There was a scuffle at All Saints Cathedral, Kampala as relatives of deceased lawyer Robert Aldridge Kasango, aka Bob, fought over his body.

A scuffle ensued Tuesday afternoon moments after the funeral service when relatives failed to agree on where his remains should be buried.

The Tororo group said they were being sidelined by Kasango’s in-laws.

They (Tororo group) intercepted the body as it was being taken to the hearse by funeral service providers, loaded it on a waiting truck and sped off with it.

The Fort Portal group were seen making frantic calls, seemingly to security operatives, asking them to intercept the truck en route to Tororo.

During the scuffle, Kasango’s mother, Ms Rose Kabise,  said she would be devastated if her son’s remain are buried in Fort Portal, miles away from Tororo District where she currently lives.

The 46-year-old high-flying lawyer in the 2000s, died at Luzira prisons on Saturday evening.
Friends in the inner circle also knew him by the affectionate alias Q. 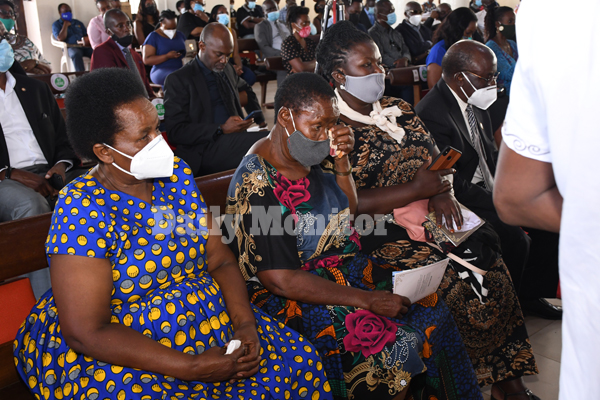 As the founder of the then successful Hall and Partners law firm, which was so reputed that international litigants sought its services, the professional and personal world of the famed Kasango, started to crumble in 2018.
At the time, he was convicted of conspiring to forge a court order, a certificate of taxation and a certificate of costs directing the Attorney General to pay his law firm Shs15.4b.

The money in question had been meant to pay pension and gratuity of more than 6,340 pensioners between 2011 and 2012.
Kasango was jointly sentenced with former Public Service top officials; Jimmy Lwamafa (nine years), Christopher Obey (14 years) and Stephen Kiwanuka Kunsa (nine years).
At the time of his demise, Kasango was serving a 16-year imprisonment. The judgment in his appeal against the sentence had surprisingly not been delivered four months after the hearing was completed.