According to Kutesa, the ruling National Resistance Movement (NRM) party which has been in power for over the last three decades was declared successful at both presidential and Parliamentary level. 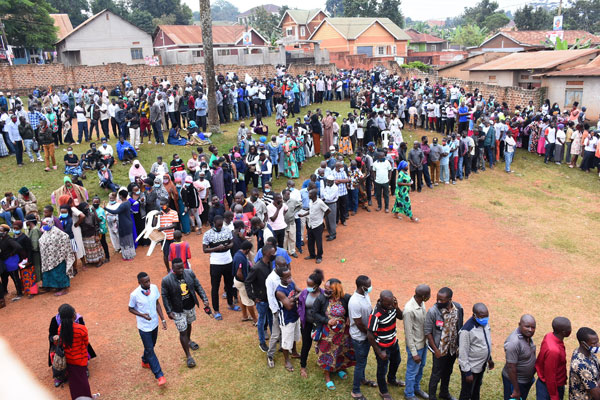 This photo taken on January 14, 2021 shows voters lining up to cast their ballot in Kampala during presidential and parliamentary elections

“It's noteworthy that despite efforts by internal and external actors to promote violence, the government has been able to preserve the peace. Also, some of the social media platforms like Facebook and Twitter shut down government and NRM party accounts leaving accounts of other political actors active. We considered this as an interference in our elections. We asked them to restore the closed government and NRM accounts and they didn't heed. In response we shut them down to ensure equity,” Mr Kutesa told diplomats in Kampala on Wednesday during a meeting to brief them on Uganda's general election.

The Forum for Democratic Change (FDC) party got 28 seats, Democratic Party (DP) got eight, Uganda People' Congress (UPC) got 10, Justice Forum (JEEMA) got one People’s Progressive Party (PPP) got one while 73 MP-elects were independents.

Internet as a security threat

He further said the internet shut down a day before election was a necessary step to stop the “vitriolic language and incitement to violence” which was a threat to Uganda’s democratic process and the security of the country and its citizens.

Observers say this has been one of Uganda’s most contested elections, pitting the young against the old generation. The election period has also been the most violent, with dozens of fatal cases recorded since early November last year.

One such incident is the riot of November 18-19 where 54 people lost their lives as security forces dispersed protestors following the arrest of National Unity Platform (NUP) party Robert Kyagulanyi alias Bobi Wine in Luuka District where he had gone to campaign.

However, Mr Kutesa in his brief accused some political leaders he did not name of inciting violence, aiding and abetting the November 2020 rioters.

“We hope that all our partners understand the gravity and severity of the statements made by some of the political leaders. The insurrection of November 2020 in Kampala and other areas of the country was unprecedented but not spontaneous. Some of these leaders aided and abetted the rioters,” he said.

Mr Kutesa also told the diplomats that from the beginning of the campaigns, the opposition candidates talked about a 'Plan B' which was allegedly intended to commit violent acts and an insurgency

“Plan B was a plan to commit violent acts and an insurgency, circumventing the demographic path. To this day they have continued to stoke fear and incite violence which was a clear and present danger to the security and stability of the country and its citizens. Would any country that upholds democratic values tolerate a Plan B? Uganda will certainly not accept this because we are committed to democracy,” he added.

It's against this background that Mr Kutesa says the government heavily deployed the army in Kampala and its surroundings in what many activists and observers say it was intended to intimidate voters mainly in opposition’s stronghold.

“This was done to reassure the public that there would be order during the elections and to those who wanted to disrupt peace, the message was that please don't dare,” Mr Kutesa added.

According to the minister, the government of Uganda in its approach to the pandemic has prioritized the protection of its citizens since the virus outbreak was confirmed in the country in March last year.

“Uganda, like many countries around the world is still grappling with the consequences of Covid-19. Ever since its outbreak, the government of Uganda in its approach to the pandemic has prioritized the protection of human life since without the right to life it is impossible to enjoy the other rights, including the right to vote,” he said.

He said the elections were free, fair and peaceful following heavy security deployment.

“In the face of Covid-19 pandemic, the government ensured favorable space for a free, fair, peaceful and inclusive process that allowed candidates competing for various positions to canvass support from the electorate. Messages of congratulations have been received. The observers have referred to the [presidential and Parliamentary] elections as peaceful, free and fair, and the results reflecting the will of the majority of our people” he said. 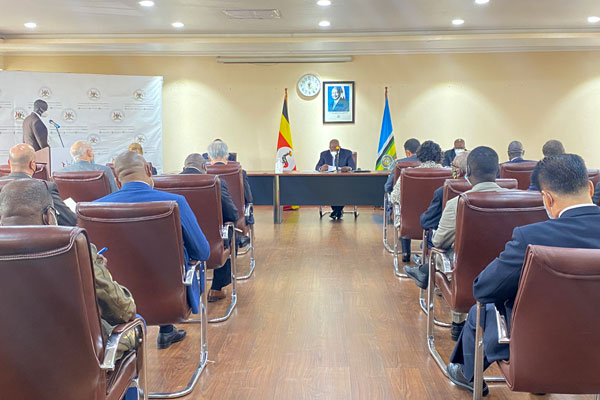 However, in their statement after the Wednesday meeting with Mr Kutesa, the European Union (EU) said they were “gravely concerned” by the continued harassment of political actors and parts of civil society.

"In line with its laws, international commitments and obligations, the government must ensure that security services act with restraint, that any violations or abuses are dully and impartially investigated and that those responsible be held to account. Pending final results of the electoral process including the parliamentary and local elections, the EU calls on all parties to refrain from any form of violence as well as from statements and actions that may incite violence, and for election challenges and complaints to be addressed in an independent and transparent manner through the available constitutional and legal remedies," EU said.

EU further said no major violent incidents were reported on Election Day "but regrets that the disproportionate role given to security forces during the elections brought forth violence in the pre-electoral period, harassment of opposition leaders, suppression of civil society actors and media and the raiding of a domestic observers’ office.

"Access to social media was disturbed and a full internet blackout disrupted freedom of expression, freedom of information, and regular economic and social activities. In particular, this severity hampered the work of journalists, observers, party agents and others expected to report on the polling results and scrutinize them. The EU calls on the government of Uganda to respect the freedom of expression and the right to peaceful and safe assembly, including the free movement of all political actors and their supporters," the statement added. 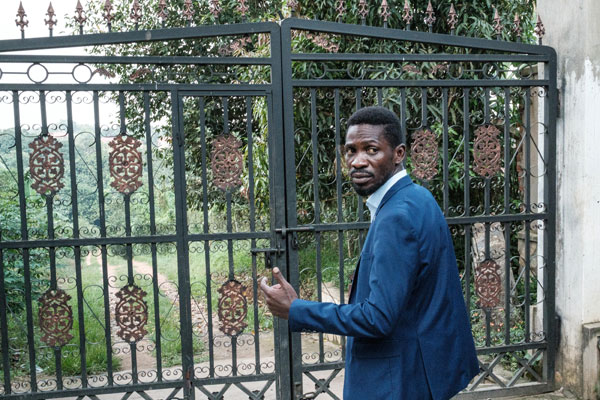 Presidential candidate Robert Kyagulanyi, also known as Bobi Wine, explains to media how uniformed personnel entered through a gate of his home in Magere, Uganda, on January 15, 2021.

Mr Kyagulanyi who came second in last week’s presidential elections with almost 35 percent of the 9,983, 093 valid votes declared by the Electoral Commission chairman, Justice Simon Byabakama, has been confined to his home in Magere, Wakiso District since January 14, 2021.

Before his house arrest, Mr Kyagulanyi disputed what he described as 'fake results' that indicated Mr Museveni, 76, had secured his sixth term in office.

Mr Kyagulanyi further said he would be challenging the results in court.

Mr Patrick Amuriat of the FDC who trailed in the third position with 3.24 percent also disputed the results but insisted he would not challenge Mr Museveni’s victory in court as it was a waste of time.