Advertisement
By Jessica Sabano
More by this Author

A 90-year-old retired primary school teacher at St Joseph Kyabakadde has described the late Kampala Archbishop Cyprian Kizito Lwanga as an obedient and loving person, whom everyone revered.

Ms Solome Nakamanya, 90, remembers the deceased as a bright student.  She told Daily Monitor on Tuesday that the deceased joined St Joseph’s Kyabakadde in Primary One and was down-to-earth, hardworking, thoughtful and a very smart boy who every teacher knew at school.

“He was my pupil from 1959 to 1964 at St Joseph Kyabakadde in Mukono District,” Ms Nakamanya said.
The deceased was so bright in that he used to lead in class and could try hard to help those who couldn’t easily understand. He was extraordinary.

“He liked his classmates, and since I was a tough teacher, I could punish those who could not understand easily but he always encouraged and consoled them.

He was their class representative/ monitor, who was much organised in class. And because of my toughness, other pupils would fear me but Lwanga did not. He would approach me just to say ‘hello’ or on other issues concerning the class work.

I used to ride a Vespa [an Italian brand of scooter] as a means of transport from Kasangati [in Wakiso District] to school and back. I recall Lwanga approaching me and asking how much I had bought it, saying he admired it. In my mind, I sensed this boy would be developmental in future,” she said.

Ms Nakamanya said Archbishop Lwanga liked sharing, was so prayerful, and he liked his religion, often getting involved in church activities.
She said as young as he, Lwanga liked playing church music instruments such as drums.
She said the late prelate also liked football.

Ms Nakamanya said the deceased was a good listener and very respectful.
“You could find him trying to teach his friends how to do things right,” she said.

She added that the deceased did not like involving in quarrels or fights in school like other pupils, but he would instead intervene to stop that.

“When he succeeded in studies, he made sure he looked for me in Kasangati and he started visiting me after becoming a religious leader in Luweero. He supported my family and I now have religious leaders in my family, including Fr Braze Zimbe, a parish priest in Kasanga and Sr Rose Zalingelera in Nalukolongo,” the retired teacher said.

“I have been engaging him in my functions at home and he often responded positively. He last visited me in late 2019 at my home and he had promised to come back in 2020 but he did not turn up until children told me on Saturday that he had died,” Ms Nakamanya said as she broke down.
“It would have been better for him to bury me first, not for me to bury him, I believe he would give a very good speech at my funeral.” 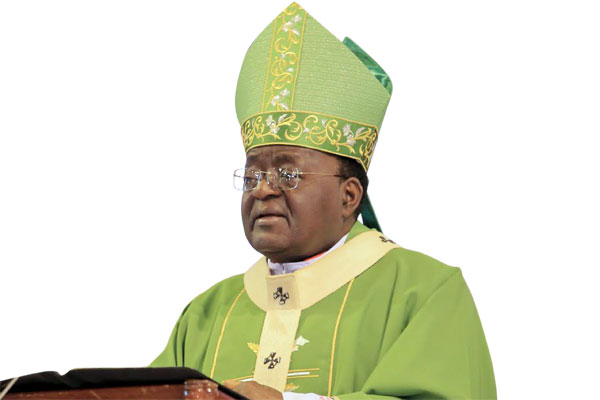 Mr Peter Ssettimba, 71, who was a close friend and one of the Old Boys of the deceased archbishop, described the fallen cleric as a clever boy. Mr Ssettimba says he studied with the late archbishop from Primary One to Primary Five at St Joseph Primary School Kyabakadde.

“He was my best friend until I left the school to Join Naggalama Primary School in Mukono District in 1965. He used to give us nicknames but names that could remind us of what we studied in class. For example, he nicknamed me John Speke [British explorer who is said to have ‘discovered’ the source of River Nile].

“Even after class, I would walk to their home since it was near the school and eat some fruits and also play football with him and other boys around. Sometimes he would take me for prayers or church practice. He encouraged me to be prayerful and to love my religion,” Mr Ssettimba said.
He added that even when they grew up, they could visit each other and the late archbishop supported him to grow in religion that he even got some religious leaders among his children.
“I now have Sisters and Brothers in my family,” he said.

Mr Ssettimba said the deceased liked greens such as dodo and whenever he visited him, he would bring him some.
“The last conversation we had was on phone early this year and I was requesting him to keep my Will since I am growing old and he told me he was going to come to his home in Kyabakadde after Easter, and that we could meet for dinner.”

In a letter to the Inspector General of Police, the taxpayers state that demonstration will take place on April 29 in Kampala

The availability of sufficient supplies of affordable energy is a prerequisite for socio-economic development. However, the construction of power...