Advertisement
By Steven Ariong
More by this Author

President Museveni, as the commander-in-chief of the country’s armed forces, on Wednesday was planned to meet top security chiefs on the explosive situation in Karamoja Sub-region.

Mr Museveni had just camped for three days in Karamoja for on-the-spot assessment of the volatile situation in the sub-region.

From January to date, many Karamoja families have lost thousands of livestock to ethnic conflicts.

The feuds have also left at least 100 people killed, either by armed warriors who attack the kraals or in crossfire between the army and the armed rusttlers.

This wave of insecurity in the sub-region has been persistent and recurrent for the last 20 years, despite attempts to snuff it out by the ruling NRM government.

So far, the government has carried out three rigorous and brutal disarmaments in Karamoja.

All these operations were pushed in the vain hope of silencing guns, stopping the bloody raids and loss of lives and pacifying Karamoja.

But the deeper issues of what fuels the Karimojong’s love of owning guns and engaging in feuds have eluded the government and army.

In sum, the government has often treated the symptoms and not the cause of the insecurity and gun violence in the semi-arid sub-region.

By the end of 2003, the three get-out-the guns operations had 10,000 guns recovered from Karimojong warriors.

The collections of the 10,000 guns made the region secure but still, the army pushed on picking up guns through intelligence-led operations.

After this lull in violence and roads becoming passable by both day and night without any ambush, had government enticed into a false sense of security, and it pulled out military boots on the ground, leaving the region opened for warriors again.

The greatest mistake the government made was not to sustain the deployment of soldiers in the region.

The government also forgot to deploy troops to monitor the country’s international border, well knowing that militant Turkana nomads, who live only 30 kilometres away from Karamoja, remained armed. 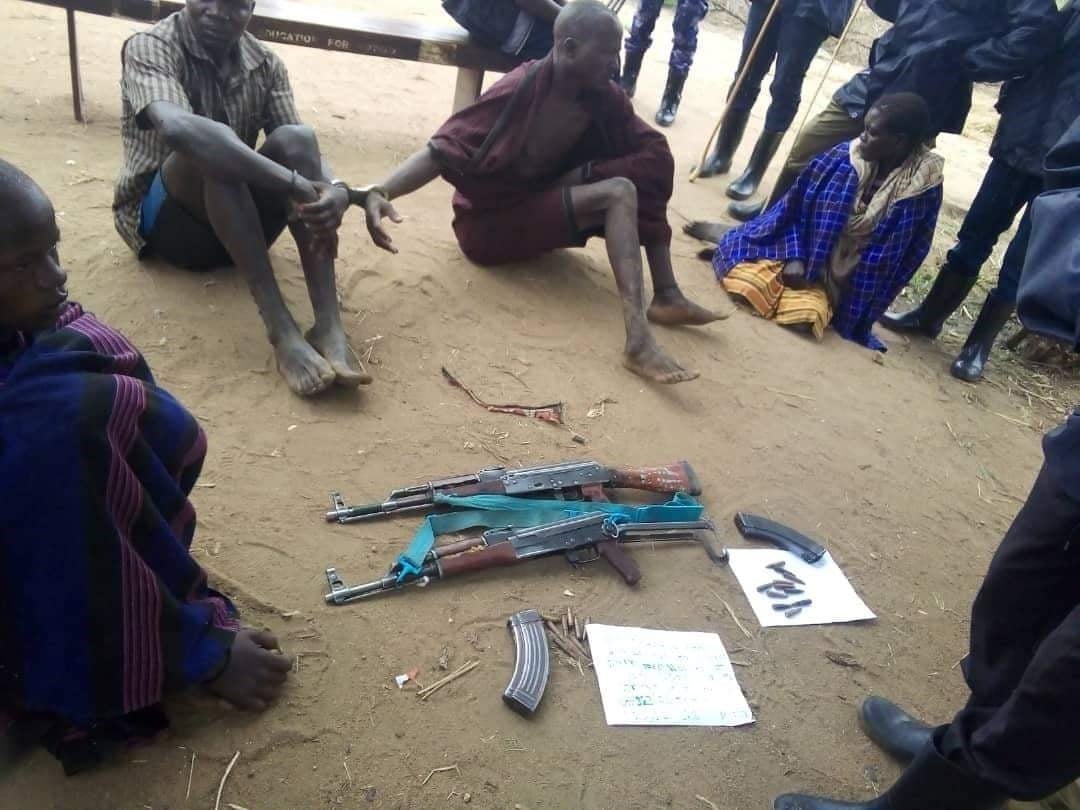 Some of Karimojong who were arrested after being found with illegal guns.

And to make matters worse, the armed Turkana pastoralists soon crossed into Karamoja with guns to graze some 100, 000 livestock. The thin security on the ground left the warriors with no option but to ream to protect their kraals, animals, and families.

Another mistake that government made was not to disarm the mindset of the Karimojong.

As government would soon discover, removing guns and recruiting reformed warriors into LDUs, but who would sneak out as warriors to raid, messed up things even more.

Government was subsequently forced to announce the third phase of  disarmament.

The first disarmament was a soft operation launched by President Museveni in 2001, as he camped at Morulinga State Lodge in Kangole Town Council, Napak District.

This involved leaders from Karamoja traversing county to county, persuading warriors to give up guns and hand them to the UPDF.

But some leaders resisted the call to surrender the arms because they earned their livelihoods from the bullets.

This resistance emboldened some warriors who faced off with the army.

In reaction, President Museveni issued an order to political leaders and military commanders to enforce the second phase of disarmament.

Soon after, the government increased police, intelligence and LDUs boots on the ground.

They were to offer better protection of the people in the region against both internal and external aggressors.

To stop inter-clan raids, government also recruited 146 vigilantes per sub-county and another 292 per sub-counties bordering Kenya and South Sudan.

They were armed and paid by government and placed under the army.

Government officials then engaged kraal leaders by radio broadcasts, preaching the dangers of illegal guns but some cliques still resisted the moves.

To stamp its authority, on February 15, 2002, the UPDF launched the third disarmament, with orders to shoot on sight  any person found with a gun on the roads. This involved cordoning off and searching suspected villages and kraals, arresting and prosecuting suspected criminals.  The operation was meant to curb cattle raids and strengthen recovery of livestock. The UPDF then embarked on patrolling borders with Sudan and Kenya, recruiting vigilantes based on quota system per sub-county.

In this third disarmament, military intelligence realised some leaders were demobilising warriors not to hand over guns.

These resistors were arrested and beaten up until they joined the drive to get out guns from the kraals and bushes.

Here are some six ways that government and security chiefs can consider in defusing the unending explosive situation in Karamoja and attempt to create a more durable peace, stability, and development in the area.

1.Government needs to do thorough investigations on why the desire to own guns has not been eradicated from the minds of the Karimojong despite several rounds of disarmament exercises.

2.Compulsory education for the children in Karamoja to break the culture of cattle raids and keep away the little ones from being inducted into cattle-rustling culture, which has persisted through generations. The government needs to acknowledge that cattle rustling and insecurity in the region are age-old, and have run for generations.

This means government should evolve a comprehensive solution to the problem. One is accepting the fact that cattle-rustling is a culture and the solution to it requires a near life-long education, learning, unlearning, and psychological disarmament.

This, therefore, means affording long-term compulsory education to the children in the sub-region to transform their mindsets.

Merely taking away the gun from the Karimojong leaves him intact with an ingrained traditional mindset that perpetuates cattle rustling whenever the opportunity or environment is ripe.

3.The government and our security chiefs should emphasise a sustainable, and not an on-and-off deployment that is often lulled to sleep by temporarily quiet and relative peace in the region.

This false peace in the sub-region has seen the withdrawal of hundreds of UPDF troops for deployment elsewhere.

Our forces and their commanders need to know that they are not only fighting gun-toting warriors, but an unseen enemy; the cattle-rustling mindset. This is why the gun-carrying warriors can melt away but not the practice that resurfaces once the armed forces let down their guard.

4.Re-introduce electronic animal branding in Karamoja. In 2012, government through the initiative of First lady Janet Museveni, who was then minister of Karamoja Affairs, launched electronic cattle tagging with the aim of getting rid of cattle rustling in the sub-region.

The project cost  government Shs2b and had up to 100,000 cattle branded, while another 112,000 remained unbranded due to lack of funds.

The animals are made to swallow electronic boluses with details of the owner, village, parish, sub-county  and district, and once that animal is raided and recovered from any other district, it will be detected using a computer stick.

The branded animals could also be tracked using the chip whenever they were being driven off by the rustlers to other locations.

The initiative worked very well and rustlers then feared to raid the animals, but the challenge is that a large number of those branded animals have since been slaughtered and others sold off ,and the calves are not branded.

5. Many development or investment projects in the sub-region have gone to waste without much tangible change in the pastoralists’ nomadic lifestyle. This is because the projects are conceived and transmitted top-bottom, instead of bottom-up.

Likewise, investors need not ferry away the precious minerals from the sub-region, but should put up industries in Karamoja to create jobs that can attract away from nomadic lifestyle, the youth of the area.

This means all mining companies should be conditioned to building factories in Karamoja and employing the idle youth who happen to be surviving on the plunder from the raids.

But the challenge now is that what is happening in Karamoja is not mining, but middlemen posing as investors, who get mining leases and sell them to rich investors for their own benefit and not for the community.

Many potential investors have been arguing that lack of high voltage power has constrained their plans to build factories in the region.

But government has completed the construction of a 132-high voltage power line direct to Karamoja to support industrial development, so there should be no other excuses for the continued ferrying of raw materials from Karamoja to other parts of the country  to process.

6. Finally, the recruitment of LDUs in the sub-region should be undertaken at the grassroots, the personnel put under strict army command, and their use of guns and uniform strictly controlled so that they are not manipulated  by rival Karimojong tribal leaders.

The school, according to the district chairperson, Mr Ignatius Kiwanuka Koomu, has been permanently closed

Isaac Matovu, a resident of Kamuli A Zone in Kireka, Wakiso District died in an explosion on a bus belonging to Swift Safaris Bus Company at...

Clues are clear and plenty, Museveni speaks out on bus explosion