Ms Amelia Kyambadde, Uganda's minister of trade, industry and cooperatives, said that Uganda will improve the quality of maize exports and Kenya and other EAC member countries need to continue to trade together.

Advertisement
By Xinhua
More by this Author

President Museveni said Tuesday that talks are needed to prevent irregularities in trade among member states of the East African Community (EAC).

Mr Museveni made the remarks when meeting a visiting Kenyan delegation for discussions on bilateral trade, according to a statement from the State House.

The meeting was held after Kenya banned importation of maize and dairy products from Uganda. The essence of competition consists in a common market, and any business that breaks the rules should cease to exist, Museveni told the meeting, adding that trade irregularities between the two countries be eliminated. The Kenyan delegation was led by Betty Maina, Kenya's cabinet secretary of the Ministry of Industrialization, Trade and Enterprise Development, who said that importation of Ugandan maize was banned as a result of toxins and moisture content found in the grain. 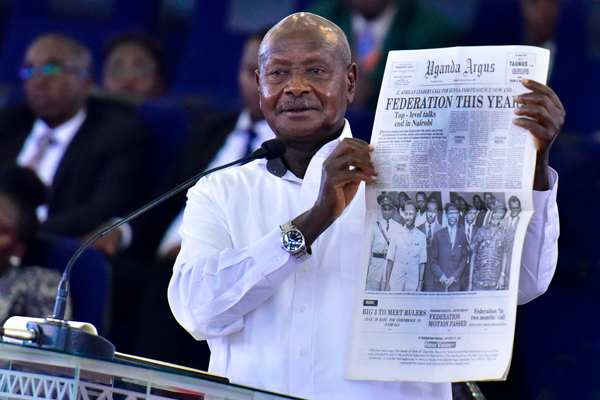 "The maize lacked a certain level of dryness (required) by Kenya and East African standards," she said.

Ms Amelia Kyambadde, Uganda's minister of trade, industry and cooperatives, said that Uganda will improve the quality of maize exports and Kenya and other EAC member countries need to continue to trade together.

The EAC is an intergovernmental organization composed of Uganda, Kenya, Tanzania, Rwanda, Burundi and South Sudan.

President Museveni promised a lot in kisanja hakuna mchezo and is making even firmer promises as he prepares to swear in for another term. We...

Museveni’s road to 40 years in power: The challenges ahead

There are so many other challenges that lie in wait, which have to be dealt with given that they will have a bearing on the 2026 election