President Museveni yesterday outlined five key areas that his new Cabinet must do to bolster Uganda into the middle-income status.

During the swearing-in of his Cabinet at Kololo Independence Grounds, Kampala, the President tasked the ministers to focus on national cohesion, fight corruption, push for national and regional integration, ensure proper service delivery, and popularise and practice patriotism.

“This Cabinet should decisively push Uganda into the middle-income status,” Mr Museveni said, adding: “We are going to smash the corrupt.”

The President also defended the appointment of the former Speaker of Parliament, Ms Rebecca Kadaga, as the First Deputy Prime Minister and Minister of East African Affairs, saying she will lead the push for regional integration.
Ms Kadaga will be assisted by Mr Magode Ikuya, the State Minister of East Affairs.

A total of 65 ministers took oath in a ceremony presided over by the deputy head of Public Service, Ms Deborah Katuramu.
Mr Museveni has now a fully constituted Executive that will work with the other two arms of government to implement the National Resistance Movement manifesto. 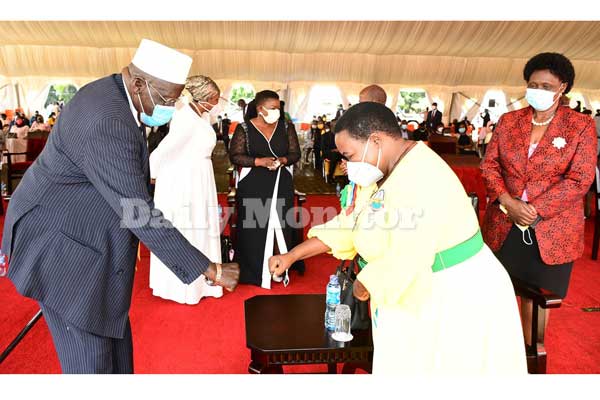 Speaking on the sidelines, the State Minister of Water and Environment, Ms Aisha Ssekindi, said unity is an integral factor in the Cabinet.
“We need the cohesion because it is through unity that national development can be realised. The President is right to demand that we work as a united team,” Ms Ssekindi told Daily Monitor.

The State Minister for Disaster Preparedness in the Office of the Prime Minster, Ms Esther Anyakun, promised to build a formidable team.
The Vice President, Maj (Rtd) Jessica Alupo, Prime Minister Robinah Nabbanja, and the Education minister, Ms Janet Museveni, were among those who took oath.

Others were Maj Gen (Rtd) Jim Muhwezi, the Security minister, while the former Chief of Defence Forces, Gen David Muhoozi, was sworn in as the State Minister for Internal Affairs.

According to sources, some of the ministers could not attend because they are in self-isolation after getting into contact with Covid-19 positive people.
A statement from Ms Babalanda’s spokesperson, Mr Faruk Kirunda, yesterday said she is under quarantine.

“Accordingly, she will be in isolation for some period as advised by the doctors. This means that she cannot take oath of office scheduled for today (yesterday). The minister, however, assures the public and her colleagues that her condition is not worrying and she is expected to take oath at a later date after the quarantine period,” Mr Kirunda stated.

Others that missed the function were Mr Muruli Mukasa, the Minister of  Public Service designate, and Mr John Mulimba, the State Minister of Foreign Affairs (Regional) designate because they have not been vetted yet.