Advertisement
By Our Reporters
More by this Author

Agnes Nandutu
From renowned journalist to Parliament, Ms Nandutu has been appointed State Minister in-charge of Karamoja Affairs.
Ms Nandutu, who is the Bududa Woman MP, aims to push for industrialisation in Karamoja and also end suffering of women and children in the area.

She says she will also focus on changing the mindset of the people of Karamoja to be able to engage in commercial agriculture to increase household income.

“I know there is a big challenge ahead of me. The First Lady has been in this position before and she and other ministers before have done some work. I am going to start from there. The challenges are there, but Karamoja is an endowed region with a lot of minerals,” Ms Nandutu said.

Nandutu says there is need to find out why a number of children from Karamoja Sub-region end up on the streets of Kampala.

“When we find the root cause, we shall be able to solve the problem,” Ms Nandutu added.

“I thank the President for entrusting me with this position. I pledge to remain honest and trustworthy to Ugandans. The truth is, I had never thought or even dreamed of becoming prime minister.

“I pledge to work for Ugandans and I will not disappoint you. I have been given a big team of people I have been working with in different capacities.

Dr Monica Musenero, Minister in-charge of Science and Innovation
Currently popular for her positon as senior presidential adviser on epidemics, Dr Musenero looks forward to showcasing what the country and Africa is capable of when it comes to science and innovation.

Dr Musenero said she wants science and innovation to be one of the greatest contributors to the country’s Gross Domestic Product (GDP).

“I want to make products of science and technology appear on the chart of Uganda’s GDP. You see how coffee is contributing to the GDP, it has brought so much money,” Dr Musenero said.

Okasai Sidronius Opolot
The Kumi MP has been appointed Minister of State for Energy and Mineral Development.

Mr Opolot, a former director of crop resources at the Ministry of Agriculture, yesterday told Daily Monitor in an interview that his starting point will be service delivery to ensure all Ugandans benefit from the vast resources the country has.

“This country has all resources such as water that can generate enough electricity, oil and sun (for solar) but we are where we are. I am coming to look at how we can have our people’s mindset changed and we benefit from our resources,” he said.

He added: “I am a team player and I would like to see a team built in my ministry to have good service delivery. I have been a technocrat in agriculture, but now I have been entrusted with the Energy ministry. I am coming to this ministry with an open mind and my focus is mainly in service delivery,” Mr Opolot said.

Raphael Magyezi, Minister of Local Government
Mr Magyezi received the news of his appointment shortly after being declared Covid-19-free after battling the disease for some time.

He hailed the President for reappointing him to serve in the same position.
He told Daily Monitor in a telephone interview yesterday that his appointment shows the confidence and trust the appointing authority has in him. 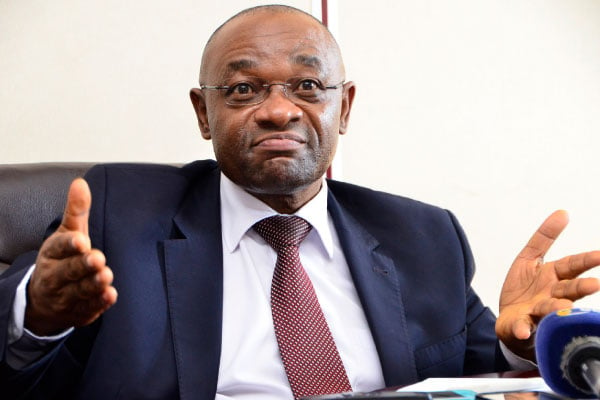 He said his appointment was on merit, dispelling talk that it was a reward for moving a motion to amend the presidential age limits in the Constitution in 2017.

Mr Magyezi said he does not look at the Cabinet position as a reward but rather a chance to serve the country.
He said the President this time balanced the Cabinet, considering women and the youth as dominant figures.

“For me, I am really hopeful we shall deliver. This is a strategic Cabinet with a key objective. I think in the next five years, Ugandans will be looking at us, are we going to achieve this key objective?”

Harriet Ntabaazi, Minister of State for Trade, Industry and Cooperatives
Ms Ntabaazi says: “I am so excited to see that I have been appointed a State minister. I am more than ready and what I can say now is that we shall drink the water when we reach the river.”

Milly Babalanda, Minister for Presidency
Ms Babalanda has vowed to ensure the NRM party manifesto is implemented as planned and within the expected time frame, but also fight corruption and address the intelligence gaps in security systems. Ms Babalanda further said once her appointment is approved, she will challenge some lazy Resident District Commissioners.

Thomas Tayebwa, Government Chief Whip
Mr Tayebwa aims at attaining cohesion so that MPs are able to carry on governments programmes. Although the youthful Ruhinda North MP says this position is a big challenge, it is also a restoration of hope in him.
“We have to make sure we give priority to the issues that the President is concerned about – corruption,” Mr Tayebwa said.

Fred Byamukama, State Minister for Works
The Bugangaizi West MP says he will focus on fighting corruption in the transport sector and ensure safety on our roads.
“The news [appointment] came when I was travelling from my village to Kampala. I am ready and I look forward to working with everyone to ensure all transport means are safe. We will work as a team to provide equal services at the right time,” Mr Byamukama said.

Diana Nankunda Mutasingwa, State Minister in the Office of the Vice President
“I thank the people of Buikwe District who voted me as their Woman MP, which has enabled me to be appointed minister. I want to promise them that I will use my office and deliver services to them. I am going to fight land grabbing in Buikwe, which has become a problem. I   also promised to mobilise for the NRM party in Greater Mukono where it performed poorly in the January polls,” she said.

Jacob Oboth-Oboth, Minister of State for Defence and Veteran Affairs
The MP of West Budama Central County in Tororo District said he will use his new position to advocate for equal opportunities for all Ugandans.

“It is also my appeal to some of our brothers and sisters who were dropped to support us the same way we have been supporting them since they have experience,” he said.

Maggie Magode Ikuya, State minister for East African Affairs
“I am not frightened with the new assignment because I am sure the consideration was on merit. Therefore, my pending task is to see how best I can relate with others and ensure the East African Community integration becomes a reality,” she said.