PARLIAMENT: The opposition in Parliament has expressed divided opinions and disagreement over the Shs29 million meant for consultations on the Age limit amendment Bill.
The Bill seeks to amend article 102 (b) of the Constitution to lift the presidential age in what has been widely perceived as a move to create a life presidency for the incumbent Yoweri Museveni.

Whereas proponents claim the money is a bribe and must be rejected, there has emerged voices opposed to the rejection arguing that Parliament, the source of this money is credible, and its purpose is clear.
On Wednesday, a section of opposition lawmakers led by the Opposition Chief Whip Ibrahim Ssemujju publicly denounced the fund, leading to at least eight members returning the money.

By press time Thursday, Masaka Municipality MP, Mathias Mpuuga (DP) was the latests MP to return the money.
However, Ms Cecilia Ogwal (FDC-Dokolo county), a seasoned legislator contends that the money, if rejected might end into the hands of greedy individuals, waiting to swindle it. 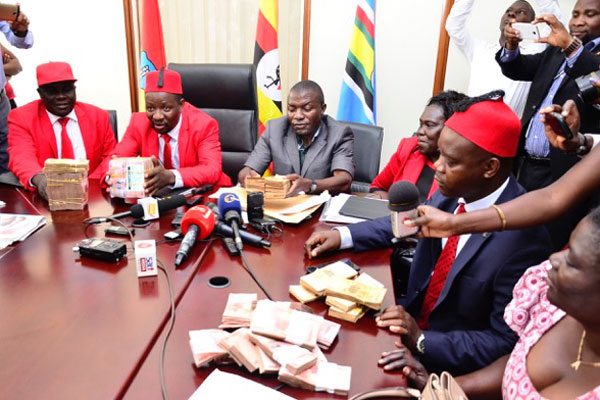 Mr Obore says the legislators who returned the money only posturing

Ms Ogwal told Daily Monitor that she was caught between a rock and a hard place since there was no strategy on how the money would be returned yet she would wish to associate with the rest of the opposition.

Like Ms Ogwal, other lawmakers including Gulu Woman MP Betty Aol, Anthony Akol of Kilak North and Gilbert Olanya of Kilak South as well as Bernard Atiku of Ayivu and Simon Oyet of Nwoya said that the money would be better spent on pressing demands within their constituencies.
Supporting the argument, Mr Herbert Ariko (FDC-Soroti Municipality) said he would take the money since it came through proper procedure.
“I did not receive that money from the hotel, so I will take it for my people,” Mr Ariko said, adding that “I have been supporting many activities back home using my personal funds and the expenditure is unbearable.”

The lawmaker also said that he would direct part of the money for constructing spring wells and rehabilitating boreholes among others.
Mr Francis Gonahasa (FDC-Kabweri) also said that since there was no common position on the money,he would rather use it for projects in his community.

Although Soroti Woman MP Angeline Osegge on Thursday cautioned her colleagues against injuring their own reputations because of Shs29 million, Mr Akol said “there would be no injury and that taking it back would leave it in the hands of thieves and would not serve the people.”
Meanwhile, Kitgum Municipality MP Beatrice Anywar (Independent) also argues that “that is parliamentary money and therefore it is not illegal. The money I returned in the 9th Parliament is because it was coming from elsewhere.”

What some new MPs said:
Mr Micheal Kabaziguruka (FDC-Nakawa): “My people want me to take the money and use it in the constituency, but I will have to disappoint them. I cannot sacrifice my country for only Shs 29 million.”
Mr Kato Lubwama: “This money belongs to people, if those MPs [who have retuned] say it is a bribe let them reject the salary. I will take this money to my people and I’m sure they will be very happy.”