The outgoing Entebbe municipality mayor, Mr Vicent Kayanja DePaul has declined to handover his report to Mr Fabrice Rulinda who was on Tuesday sworn in as his successor.

Mr Kayanja did not only fail to hand over the report but also shunned Mr Rulinda’s swearing in ceremony.

Entebbe town clerk, Mr Charles Magumba was seen conducting all the duties which would have ideally been done by Mr Kayanja during the handover ceremony.

It’s alleged that Kayanja was forcefully ejected from office as he was still pursuing his court case challenging Mr Rulinda’s victory.

When contacted, Kayanja said,” There’s no way I can hand over the report to a thief. My victory was robbed. I remained with the report because it is mine since I am the one who won [the election]. So the report has to be mine.”

“We are just waiting for the court to set a hearing date,” he added when contacted on phone.

Meanwhile, Mr Rulinda was sworn in by Entebbe Grade one Magistrate Naomi Sikoyi as Kayanja’s successor.

He was sworn in alongside Entebbe Municipal councilors.

“I am aware of the power available in collaboration, relying on the fact that no one human being knows it all. With the swearing in today, the dice has been cast. I’m open to work with everybody. My leadership is one of forgiveness and reconciliation. We start afresh. I don’t care if you are Democratic Party (DP), National Resistance Movement (NRM), National Unity Platform (NUP) or Independent; as long as you are residents of Entebbe,  you’re my brother and my sister,” Mr Rulinda said.

“I am under no illusion that I can do this alone. I am but one. We have seen the spirit of togetherness during the campaign and during the pandemic. We saved lives, we comforted others. We pulled through together. As such, I am reaching out to friends, and loved ones. I am reaching out to institutions, both local and international to join us in succeeding with our vision,” he said.

Mr Rukinda, an Independent candidate, was declared winner of the January mayoral polls replacing Mr Kayanja (DP) who served two terms as mayor of the municipality. 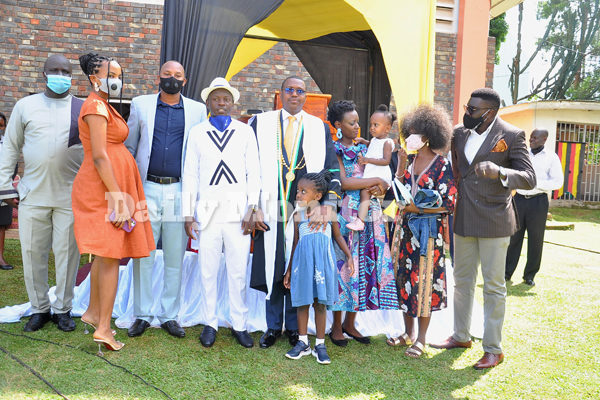 Mr Rulinda poses with members of his family after swearing in as Entebbe municipality mayor.

“I intend to preside over an efficient service delivery system in the municipality. If some things can be digitized to speed up the process of serving our people, we must do it. If processes can be re-engineered to find efficiency and effectiveness in providing access to facilities to our people, we must do it. We must create an atmosphere where the people of Entebbe feel like they are being served not just because it is their right, but because they deserve it,” he added.