Advertisement
By Micheal Kakumirizi
More by this Author

Several pedestrians and cyclists were Thursday seen pleading with security operatives at different checkpoints on all roads leading to the capital Kampala after they were blocked from accessing the city by officers enforcing the 42-day virus-induced lockdown announced on June 18.

At checkpoints visited by our reporters, there was unusual heavy deployment of police, the army and traffic officers as everyone was required to show their work identification card and explain to the security operatives where they were going. 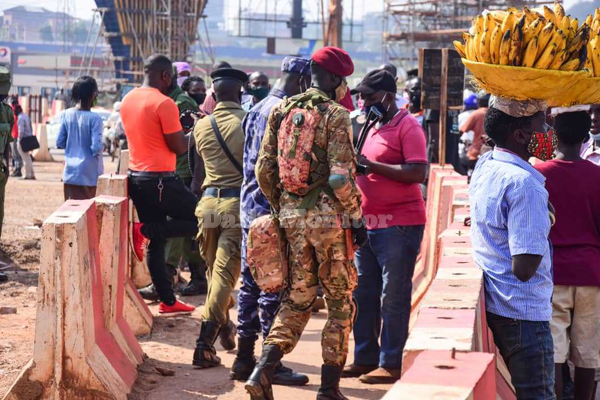 Since last month when ban on public transport, among other measures were announced, several people across the city have been walking or riding bicycles to work.

However, only pedestrians, cyclists and motorists categorized under essential services as well as patients travelling to health facilities were allowed to go past the checkpoints Thursday.

“Where are you going? Go back and wait for the President's address scheduled for tomorrow,” shouted one of the police officers deployed at Clock Tower along Entebbe-Kampala road as he addressed the people who had gathered and pleading to be let though.

President Museveni is scheduled to address the nation tomorrow on the next course of action after the lapse of the current lockdown imposed effective 10pm on June 18.

“Fellow Countrymen, Countrywomen, and Bazukulu, I will address the country on Friday the 30th July at 8:00pm. I have asked that the address be broadcast on the different TVs and Radio stations for your convenience. Please ensure that you tune in,” Mr Museveni tweeted Thursday morning.

VIDEO: People plead with police personnel at Clock Tower to allow them access the city centre. They've, however, been ordered to go back and wait for the President's address slated for tomorrow to guide on the way forward, as the 42 days elapse.#MonitorUpdates
📹 @kakumirizi2002 pic.twitter.com/Vnimyyspfl

At the time, daily Covid-19 infections had for the first time since Uganda registered its index case in March 2020, grossed 1,000 while fatalities per day hit 50 and hospitals, like critically-ill patients, gasped for scarce medical oxygen.
Now the daily infections rates are down at 200-plus and Covid-related deaths scattered after President Museveni shut schools to disperse 15 million students, closed worship places and stopped public transport alongside unauthorised self-drives and revived roadblocks, manned by police and soldiers, to prevent inter-district travel.

Health Minister Dr Jane Ruth Aceng, speaking in a televised address to the nation early this week, said to safely reopen the economy, the country will need to vaccinate half of the population, which is roughly 22 million people.
She, however, said only 1.1 million people have so far been vaccinated since March 10 when the country launched nationwide immunisation against the pandemic.

Third boda boda cyclist killed in Masaka in one week