The Katikkiro (prime minister) of Buganda Kingdom Charles Peter Mayiga has said that roofing Kasubi tomb will take time because some compulsory rituals have to be performed.

Speaking to the media during the official launch of the roofing process, Mr Mayiga said they could not rush because the stage they have reached needs more attention than ever.

“We have gathered here to perform one of the most important rituals that precede the thatching of the Kasubi tomb called Muzibu azaalampanga. This ritual is supposed to be presided over by the by the King of Buganda Ronald Muwenda Mutebi II but this time he delegated Prince Daudi Chwa,” he said.

Mr Mayiga added that the Prince Chwa started by handing over a red cow to the main thatcher a sign to avert any would-be tragedy during the roofing process.

“The prince went on and handed over a bundle of thatches to the main thatcher (Wabulakayole ) from the linage of Ngeye clan and after the clan leader also performed the ritual  by handing over two bundles of thatch as a sign of officiating,” he explained. 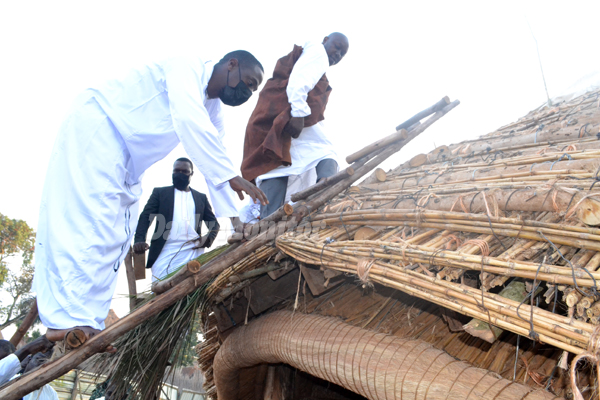 Mr Mayiga narrated that he arrived at the tomb with a calabash of wine and was given a basket of coffee berries to signify that they must work together to accomplish the task.

“I took some of the wine to signify that we are happily working together and aiming to have good results,” he said.

“The exercise is deeply rooted in culture and traditions and all of them must be followed. Thatching marks the beginning of the end of this most important work of restoring the Kasubi tombs,” he elaborated.

Mr Mayiga also noted that the exerciseis going to take time because every step and material that is going to be used must follow the ritual procedures to avoid making mistakes.

“We were here three weeks back and I told people that  the exercise will not take one week therefore people have to be patient because very soon they will start seeing the roof of the Kasubi tomb when they are out side the palace,” he said.

Mr Kaddu Kiberu the chairperson of the restoring committee said, “We had cultural procedures to follow while roofing the Kasubi tombs, being a cultural structure, and it was very crucial and we needed more advise from the culture leaders of the royal family.”

“Since it has been officiated we expect to finish this stage very soon because we have started placing the grass as one of the final stages and as the roofing goes on other final touches will also continue inside the tombs,” he added.

The Kasubi tombs were torched on March 16, 2010, in a mysterious fire, just nine years after being declared by Unesco as a world heritage facility.

The tombs were established by King Mukaabya Walugembe Muteesa I in 1856.

Restoration of the royal tombs remains the biggest challenge and debt owed to the people of Buganda by the Mayiga-led administration, which eight years ago, when he became premier, had given a deadline of one year to have the structures re-done.

But in his statement, Mr Mayiga, assured the people of Buganda that as he stated early this year, the tombs could even be complete by the end of the year.

Its delayed restoration has been criticized among the Baganda, with some accusing officials of misappropriating the funds.

Through a fundraising drive dubbed Ettoffaali and other sources, the Kingdom raised and spent Shs6.06b, with government contributing Shs2.3b of the sum, and pledging more Shs1.7b.