Advertisement
By JAMES KABENGWA
More by this Author

Worshippers from all walks of life thronged Namungoona Hill, the home of St Nicholas Cathedral, to pay homage to Orthodox Archbishop Metropolitan Jonah Lwanga, a fearless prelate, who died on September 5.

After waiting for two weeks, with the help of President Museveni, the body finally arrived from Athens, Greece, where the archbishop succumbed to prostate cancer.

It was tears as the casket containing the remains of Archbishop Lwanga landed at Entebbe International Airport slightly after 3am aboard Egypt Air.

The casket was received by high ranking figures in government and the Orthodox Church,  who had been driven to the airport in a convoy. 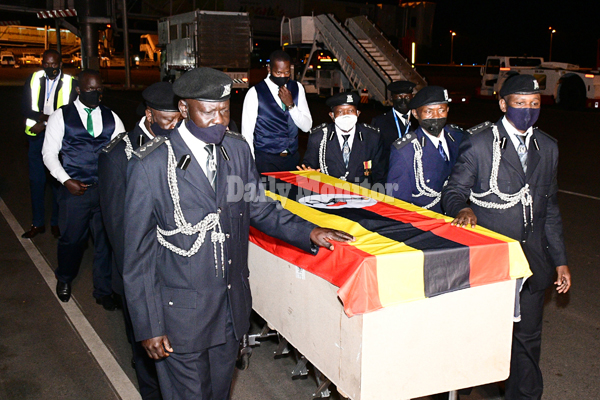 Bishop of Gulu and Eastern Uganda Silvestros Kisitu led brief prayers on the tarmac before police took the body to the mortuary.

The deceased Archbishop will be remembered as a consummate man of God who shepherded the flock with justice, utmost faith and devotion. He spoke truth to power and despised injustice and corruption. He died at 76.

Archbishop Lwanga wished to be buried in Degeya, Luweero District. However, after consulting the family, this wish  was changed.

He will now be buried at St Nicholas Cathedral in Namungoona on Monday.

“We are set as a government, in support of the Orthodox Church and family, to say farewell to Metropolitan Jonah Lwanga. I will represent President Museveni at the burial. May the Lord strengthen the family and Church,” Ms Alupo yesterday wrote on her twitter handle.

During a council meeting on Wednesday, Deputy Lord Mayor Doreen Nyanjura also tabled proposals from her executive that  Masiro to Nakibinge  road be named after Archbishop Lwanga.

The authorities also resolved that a road in Kampala be named after his predecessor, the first Orthodox Archbishop Theodros Nankyama, who died in 1997, in memory of his distinguished service to humanity and country.

-Signing of the condolence book